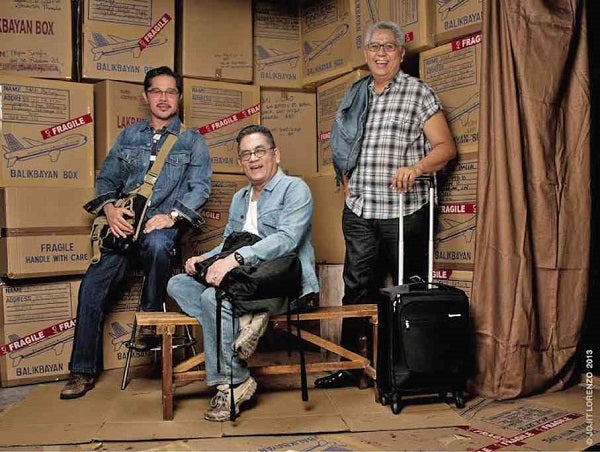 While a Filipino worker languishes in an Arab jail, awaiting execution, he decides to spend his days doing a play about another Filipino from a different century who also left the Philippines and suffered in another country: Lorenzo Ruiz.

The fate of these two Filipinos intertwines in the contemporary musical “Lorenzo,” with book and lyrics by Christian Vallez and Paul Dumol, and music by Ryan Cayabyab.

Director Nonon Padilla got interested in the project after meeting with Dumol and the producer, actor Christopher de Leon.

After going over the first draft of the libretto, Padilla put in his own idea for the musical: “I suggested to Paul to combine a contemporary character. I thought it would be a lot more interesting to relate the problem of the saint to today’s issues. Boyet (de Leon) wanted the production to appeal to a young audience. That is the reason we decided on a musical format. To relate it to an OFW, to Pinoys living abroad or in exile, would give it an interesting angle, raising spiritual problems confronted by Pinoys who feel the loneliness of separation, of raising a family far from home by proxy, and all the myriad consequent repercussions.” 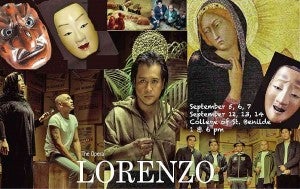 Working with composer Cayabyab was a breeze, says Padilla. “Ryan works very fast. When he says he wants to do a project, he sits down and composes. I think he did the main bulk of the music within two or three weeks of full concentration. He asked Paul to indicate, for every part in the script, the general mood or quality of music that he as a writer envisioned. He wanted a guide. Paul obliged by giving general descriptions of mood and the rhythm or tempo needed for the scene or aria.”

“To me, this is Ryan’s masterpiece,” adds Padilla. “The music is inspired. It isn’t difficult music. It is accessible, with wonderful melodies suited to the subject. You know, Ryan has an instinctive talent for theater, a quality that we rarely find these days. He has a feel for the drama in terms of music. He knows how to musically drive the scene forward, to make the scene or song pulsate with emotion.”

Padilla knows the challenge only too well: “Musicals are just different from straight plays. So many elements of theater are combined—dancing, singing, speaking, wild sets and colorful costumes, all are combined to create immediate combustion!”

A recent recipient of the Philstage Gawad Buhay! for lifetime achievement in theater, Padilla started at the Philippine Educational Theater Association in the company of Lino Brocka and Cecile Guidote Alvarez in the ’70s, but debuted as a stage director much earlier, in 1968, at a Dulaang Sibol playwriting contest launched by Onofre Pagsanghan at the Ateneo de Manila.

The play was “Hoy, Boyet,” written by Tony Perez. It placed only third, with a Paul Dumol entry getting the plum award. But Padilla and Perez had what looked like their comeuppance when the likes of J.D. Constantino, Alfredo Roces and Bien Lumbera hailed “Hoy, Boyet” as the most exciting new production in Manila that year, and Perez as a new Balagtas.

Working in Peta in 1972, in the company of Lily Gamboa as chairman and Brocka as executive director, Padilla became artistic director of the Kalinangan Ensemble.

“From the beginning, our passion was to establish a repertory company of actors, much like the Royal Shakespeare Company, or the British National Theater, or the Guthrie Theater in Minneapolis, Minnesota,” he recalls in the speech he made at the Gawad Buhay! festivities.

“It didn’t take long for Lino (Brocka) and myself to clash over choice of plays. I wanted to concentrate on the classics. He wanted popular plays. Those were the Marxist years when every choice had to have relevance to political life. And nationalism was defined by the sickle and the hammer.”

He took a respite from theater and tried an alternative career as a visual artist and printmaker. In 1987, he founded CCP’s Tanghalang Pilipino and started the Actors’ Company, which has produced the likes of Nonie Buencamino, Irma Adlawan, Shamaine Centenera-Buencamino, Pen Medina and John Arcilla, among others.

“For 16 years, we managed to present an average of six to eight plays per season,” says Padilla. “In one season we managed to do 12 plays. Budgets were always tight. Even if we wanted to expand our training program, hire more teachers and directors, we had to double up functions to make ends meet.”

He decided to leave CCP and TP over what he says was the horror of seeing an art institution eventually run not by artists but by politicians and bureaucrats. The last straw for Padilla was when the then CCP dispensation allotted P1.3 million to produce a gay version of Nick Joaquin’s “A Portrait of the Artist as Filipino.” The amount was already TP’s budget for eight productions per season at the Huseng Batute and CCP Little Theater venues.

Leaving CCP proved to be a balm for the stressed-out director. He directs at a more leisurely pace these days; his last production was Peta’s “Haring Lear” in early 2012. But while Padilla says he’s more relaxed now at age 63, the call of the theater remains strong. “Paul and I have shared a passion for theater since our high school days. I don’t think we have wavered since.”

The Manila theater audience being what it is, he hopes that those excited over the musical “Wicked” will also have time to watch “Lorenzo.”

“Lorenzo is the first Filipino saint. He will show us the way out of our spiritual rut. Ingmar Bergman, the Swedish film director, in his last interview before his total retirement, said ‘Let us not talk of God, but rather let us dwell on the holiness within man. Through prophets, saints, poets and musicians, we’ve been privileged to be enlightened about other worlds. Especially through music!’”

“You will love this musical!” says Padilla.