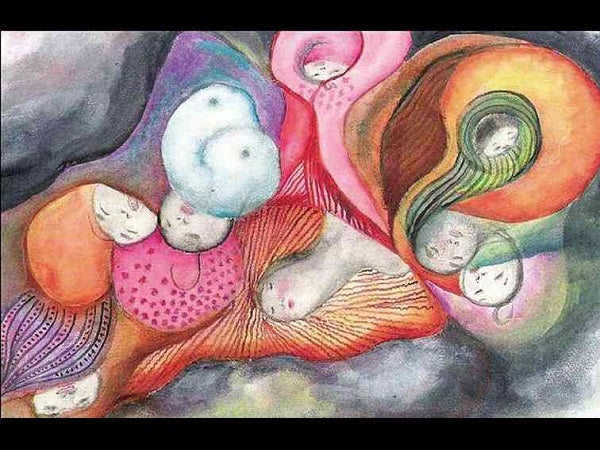 “MILKMAIDS,” by Gilda Cordero Fernando. “‘Milkmaids’ wasmy gift to Fe and Manny Ariolla on their 45th wedding anniversary when their children, Oya and Ina, gave them a surprise party.”

My husband never thought he ever did anything amiss in the upbringing of his children. I never thought I was ever doing right. Now that he was dead, I wanted the matter settled. Did I or did I not?

I sort of knew the answer. I had the hard evidence: four successful, imaginative, hardworking children who had spouses who loved them and us. (One of my boys died more than a decade ago).

It was a lazy Sunday afternoon, one of those lovely times when one’s adult sons want to visit their dear old momma. Mol had brought all kinds of snacks he had picked up in Japan, and Arcus brought a gentle wine which we three were quaffing. Of course, it was all my fine crystal wine glasses and trendy stoneware plates that we were using, hehe.

The first half hour was spent ignoring my “silly question”: Did I have any influence on the outcome of my children’s lives? They were into a lengthy discussion on what part of the globe they were next visiting (except Panay Avenue), but mainly they were interested in what good food to eat.

When I finally got their answers, they were at first smart-alecky, but I finally nailed them down. Here are their replies, for posterity, minus the wisecracks. The two brothers’ answers were surprisingly the same.

“We got our work ethic from both of you by example. Dad was always a hardworking executive and you were no slack, either. You were either writing, doing a book with colleagues, preparing some deathless theater masterpiece or closeted with gays testing costumes.

“You always threatened us (who, me?) that we would not inherit anything. That the only things we would give you were a good education and a good reputation.

“That, if we got married, we shouldn’t depend on you; if we did, we would get thrown out! Not quite true because each of us lived on Panay Avenue early in our married lives. I think it was important for us to show that we could be on our own.”

Well, well, well! It never ceases to amaze me that Dad and I never experienced any serious problems with the three boys or the only girl.

Wendy was the favorite of their father, but no one was envious because she was their favorite, too. I professed no favorites. I told them I was a communist in that regard. Everybody equal. Everybody not important. They respected that.

It’s obvious that my family is my big pride and joy. This is all very strange to me because I had a very different take on how to manage life. The moment I was married, I vowed to do the opposite of everything my mother ever told me to do.

Not that I loved her less, but I didn’t want to end up a frightened and guilt-ridden soul. And I was going to raise my children the opposite way, too. Some adore their mothers who become their role models and if that works for them, then that’s okay, too. There are no paths until we make them.

When my more-than-half-a-century-old sons were very small, how I envied my younger friends—free souls I admired, flower children like Sylvia. It was the ’60s, the hippie era of altruistic ideas, of universal love and peace. It was the age of new music, rock and roll, folk, psychedelic, art, dirty jeans and unshorn hair.

A group of such souls had brought me to Paco Park and taught me how to smoke pot.  We converged in someone’s pad near the walls. It was the first time I had understood what the Beatles’ song “Lucy in the Sky with Diamonds” was all about! Never had the colors of flowers or trees or sky looked so intense, never had anything looked so beautiful.

Thereafter, some hippie friend would gift me with a joint and I’d puff it while rocking the last baby to sleep. How I longed to share the secret with my lawyer husband who preferred scotch and would never approve.

After about a month of wild lullabies, I had a bad trip. I did not see angels and walruses or underwater castles. Only creatures with horns and hoofs. I never touched marijuana again. (To think Mary Jane is now allowed for medical use in 20 states in America.)

So even then I knew what grass was. Years later I could still detect its smell whenever any of my teenage boys were lighting a joint in the next room. The guilty are the best policemen.

Each individual has his own way of dealing with life. And it doesn’t have to be everybody’s or anybody’s way.