Still ‘crazy’ after all these years | Inquirer Lifestyle ❮ ❯ 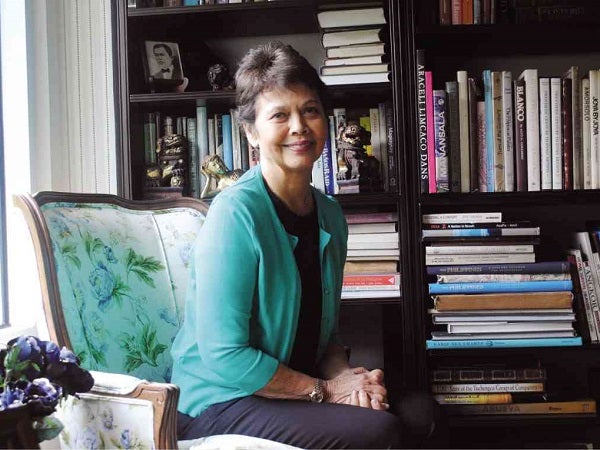 Still ‘crazy’ after all these years

Joy Virata looks cool, calm and collected as she arrives in her condo unit. She doesn’t look her age, 77; it’s something she attributes to daily, one-hour exercise, and to doing what she loves most, working in the theater.

Although she has retired from office duties at Repertory Philippines, the theater company she helped run for more than 30 years, Joy says she has kept her ties to it, although in a less stressful capacity.

She’s the artistic director of Rep’s Theater for Young Audiences, which mounts plays for children but with a cast of adult professional actors. “We do only one play per season, but it runs from August to December,” she tells Inquirer Lifestyle.

“It’s for children to develop a love for theater and we’ve been doing it for the past 21 years.”

Such devotion to a single-minded purpose stems from the vision that sustained Rep since it opened its first play to a handful of people in 1967.

Founded by theater artists led by Zeneida “Bibot” Amador, Rep plodded on with year-round lineups of straight plays and musicals—surviving presidents and economic crises and, in the process, raising generations of actors and stage production specialists known for their professionalism and talent.

“Bibot’s dream was to create a theater industry and she has done it,” says Joy, whose other preoccupation now is the restaging of a play she costars in, “Mind’s Eye.”

She says she fell in love with the play when former Rep staffer and actor Jaime del Mundo showed her the script three years ago.

The story of an old woman who is going blind and could hardly walk, and a young girl (played by Jenny Jamora) who is paralyzed from the waist down after an accident, “Mind’s Eye” grabbed Joy’s interest for its vivid depiction of the power of imagination.

“The play emphasizes the need for reading, for knowledge of art and literature, how your mind needs that, and the importance of imagination,” says Joy.

She plays a former English teacher who finds herself at odds with a rebellious young girl; somehow they agree to take an imaginary trip to Italy using a guide book.

The play, Joy admits, is “hard to sell. People don’t want to see straight plays these days. They want big musicals with a lot of sets and costumes and music and whatnot. I had only three performances of ‘Mind’s Eye’ (at RCBC Plaza) last year, although I had four more shows (for Trumpets) at the CCP theater fest.”

Joy says she decided to mount the play on her own because she didn’t want to bother Rep with the risks involved.

“It’s expensive to produce a play,” she points out, adding that her daughter, Gigi, and husband, Cesar, are bankrolling “Mind’s Eye” for her.

“But the play is so beautiful,” she gushes. “I must say that anyone who saw it (last year) couldn’t stop raving about it.”

One of the show dates was bought by two corporate groups for their fundraising projects.

Although the local theater scene seems more alive than ever, Joy says there’s still not enough audience for it to be financially robust: “There’s a lot of theater, but the audience is still not there. Or they just want to see big musicals. All the small theater companies are having a hard time.”

The challenge, according to Joy, has always been marketing.

“Theater has changed so much. Actually, that’s why I gave it (my office duties) up, because it now requires a different kind of knowledge and skill from what I had. I used to write letters galore, and people would read my nice letters.

“But now nobody reads letters anymore. The mailing system was no longer viable or effective. It’s now about how to use the Internet. I didn’t have the capability, the technical know-how to get into that.”

Relieved of her job at Rep as vice president for audience development—which involves getting sponsors and helping ensure that the company stayed afloat—Joy still finds fulfillment in special projects like “Mind’s Eye.”

“It’s a one-off thing,” she says. “I’m not starting my own company, for heaven sakes! I’m still with Rep.”

As to why her love for theater has never waned, Joy exclaims: “Because I’m crazy!”

Theater, she explains, allows her to be somebody else: “You can be anybody you want, all kinds of characters. One of my favorite lines in ‘Mind’s Eye’ goes, ‘Your mind can be as vast as Russia and as full of characters as New York City.’”

Joy says she’s an “absolutely” fortunate person to have a family that understands what she’s crazy about.

“My husband watches plays even if I’m not in the cast. He loves the arts. Businessmen who love the arts have a plus in them.”

Cesar Virata was Joy’s professor at the University of the Philippines Diliman when she was taking up a business course.

“I had five subjects under him, she recalls. “I have a master’s degree in business, would you believe? It helped me in my marketing work in Rep.”

Daughter Gigi (who runs call centers) and son, Michael, a doctor, also joined Rep when they were young.

Another son, Steven, heads a school for pilots in Clark.

Cesar, she says, has also retired as a finance executive, although he still sits on the boards of directors of banks. “He plays tennis at 6:30 every morning, and is active in the Cavite Historical Society and the Imus Institute where he is an alumnus.”

Joy says part of her mission these days is to “try to get good theater into the country and not succumb to just musicals. I mean, we need to develop a thinking population, a thinking citizenry.”

“You don’t think in a musical,” she says. “There’s nothing really much to say in a musical. Most of it now are just beautiful sets and costumes. But I use it myself in my children’s theater because I need to draw in the audience.”

When not busy with plays, Joy says she tries to do some writing.

“I wrote that play ‘Miong’ (about Emilio Aguinaldo) and my husband wants me to prepare it for publishing so other people can do it. I tried writing a novel and it got nowhere. My mother was always telling me to be a writer.”