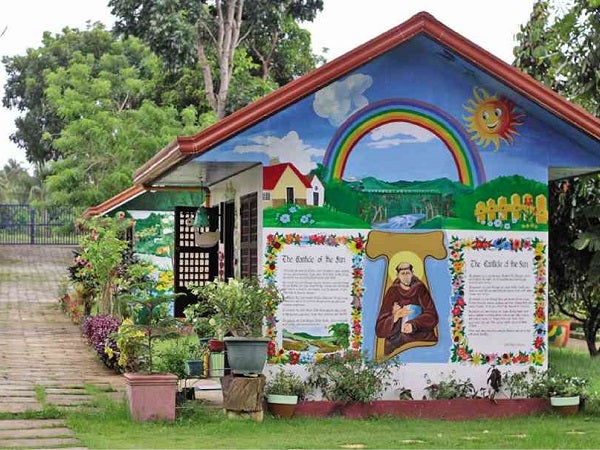 COLORFUL cottages dot the landscape, such as this house painted with St. Francis of Assisi’s “Canticle of the Sun.” ALANAH TORRALBA

Finding peace, pasta and organic produce off the beaten track

Although there are plenty of restaurants along the Tagaytay-Nasugbu Highway, tourists in the Taal Lake area know that some of the best dining places are found off the beaten track. But what happens when you drive off the beaten track and just keep going?

You’ll probably end up at Talita’ Kumi’ in Alfonso, Cavite. It’s not a bed and breakfast like the venerable Sonya’s Garden just up the road, although it does offer modest accommodations. It’s not a fine-dining restaurant either, like the acclaimed Antonio’s nearby, though it serves authentic northern Italian dishes.

It is, first and foremost, a tranquil religious retreat that just happens to offer good food and fresh organic produce.

We were brought there by a couple newly settled in Alfonso—the sculptor-furniture designer Jinggoy Buensuceso and his lovely wife, Mutya (formerly Crisostomo), who’s now the head of Luxasia.

Talita’ Kumi’ was built five years ago through the efforts of Fr. Giovanni Gentilin, an Italian priest of indeterminate age who has spent two decades in the Philippines with the Canossian Sons of Charity.

Father Giovanni has served the poorest families in Tondo, helping administer the scholarship program Una Mano Aiuta L’Altra (One Hand Helps the Other).

He had envisioned the Talita’ Kumi’ as a place where visitors could attain spiritual and physical rejuvenation.

In a charming patois of English, Filipino and Italian, Father Giovanni recalled how a visitor pressed him about the name of the place during its construction: “[There was] a typhoon  and I couldn’t sleep because of the wind and rain. I woke up and was reminded of the words talita’ kumi’—Aramaic for ‘rise again,’ explaining that the ancient words were uttered by Jesus when he miraculously resurrected a deceased young girl. Talita’ Kumi’ is a message of healing.”

Guests will find fruit trees and flowering bushes surrounding the two-story Mastrotto Building. Walking into the front door, one sees a wide staircase, its steps painted with piano keys and lyrics from the inspirational song “Kaibigan Kita.”

The stairway leads to the second floor which houses dormitories—one for men and another for women—which can each accommodate up to 27.

Downstairs, the Refectory Hall seats 60 diners at once, or any number of guests who spontaneously drop in for a meal.

In the courtyard, replicas of native Filipino homes provide cozy lodgings for individuals or couples.

A small store painted with romping dogs and St. Francis of Assisi’s “Canticle of the Sun” sells homemade products and fresh produce grown on the property.

The thriving gardens are nourished by their own vermiculture—an organic fertilizer produced by earthworms as they break down food waste, giving the air pleasant barnyard scent.

“It is all organic, no chemicals,” Father Giovanni said of the bountiful harvests. “Every month, children from Tondo come here and our farmers teach them how to put seeds in the soil. After a month, they come back and see them growing. To them, it’s ‘milagro!’”

Spiky rambutan and a cousin of kalamansi called sung-sung grow in the erstwhile orchard out front, while an expansive greenhouse protects row upon row of savory herbs, leafy greens like lettuce, cabbage and pechay, and climbing vegetables such as eggplant.

There are also ornamental plants, like Mexican sour gherkins that resemble tiny watermelons but taste like tart cucumbers, and the ignobly named “cow’s udder plant” whose bright-orange, smooth-skinned fruit looks just like its namesake.

A profusion of passion fruit growing on overhead trellises is both decorative and edible, creating a tunnel of heavenly scented fruit with a sweet-tart flavor.

Depending on the season, Talita’ Kumi’ also grows dragon fruit, wild strawberries, long beans, kalabasa, sayote and other produce that are sold at the store.

Not on sale, however, were seven oversized eggs laid this past summer by the resident ostrich. When asked what happened to them, Father Giovanni gave a continental shrug and replied, “We ate them.”

Naturally, the garden bounty makes its way into the kitchen of Talita’ Kumi’, where Father Giovanni has taught the staff how to prepare the beloved dishes of his native Italy.

In addition to a regular menu of pasta and pizza, daily specials at the retreat may also include a risotto of mushrooms, kalabasa, mustasa or talong, and a variety of freshly baked bread.

For a sweet finish, homemade gelato comes in several flavors, from pistachio and avocado, to frutti di Bosco (wild berries) and stracciatella (akin to chocolate chip).

As we enjoyed the creamy gelato, Father Giovanni spoke of showing Tondo residents how to cook perfectly al dente pasta, just as he learned from his mother.

It was a simple anecdote that deftly exemplified the spirit of the Canossian, and his own, mission: One hand that helps the other.