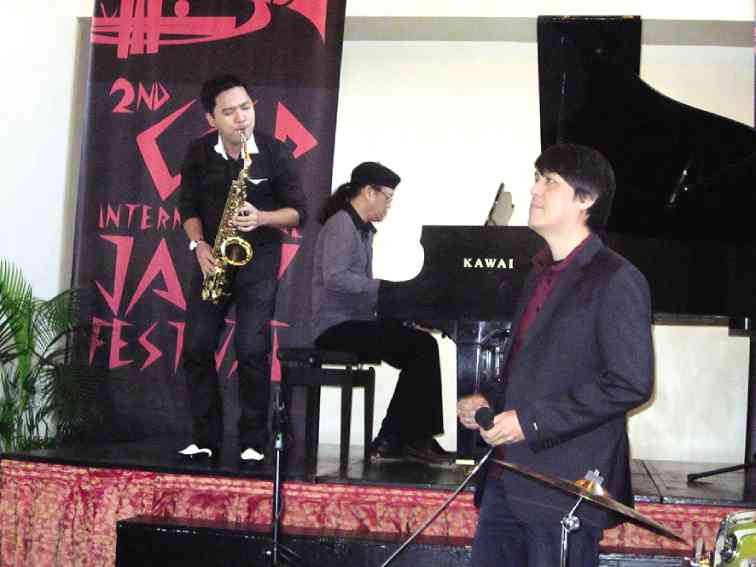 “Jazz is a vehicle to promote unity and for Filipinos to come together, unifying cliques. It is different from the usual activities the CCP (Cultural Center of the Philippines) promotes, but it is global art and we are becoming global.”

The remarks are from CCP president Raul Sunico, who added: “Jazz is not just foreign music. It is also Filipino music, which is being improvised.”

Sunico spoke at a recent press conference announcing the 2nd CCP International Jazz Festival to be held Sept. 17-22 in various venues of the CCP (call 832-1125 local 1409 or visit www.culturalcenter.gov.ph).

The press conference was held at the Millennium Hall of the Manila Hotel. It was enlivened by performances by Humanfolk (guitarist Johnny Alegre, with Jay Ronquillo on the bass and Jon Viray on the drums); pianist Emi Munji, who rendered a jazzy version of “Laura,” the pop song popularized by Frank Sinatra; and Anything Goes (vocalist Michael Puyat, pianist Bobbit Bernadas and saxophonist Archie Lacorte).

The festival, which CCP hopes to make a biennial event, will feature over 100 performers and 15 bands from the Philippines, other parts of Asia, Europe and the United States. Jazz music in all its styles will be played: big band, swing, blues, fusion and experimental.

There will be also workshops and lectures on the various jazz genres.

During the open forum, a media person asked why classical music, by and large, appeals only to “mature” audiences while jazz seems accessible to both young and old?

“It’s spontaneous and we all appreciate spontaneity,” said Puyat. “We perform in a certain way.”