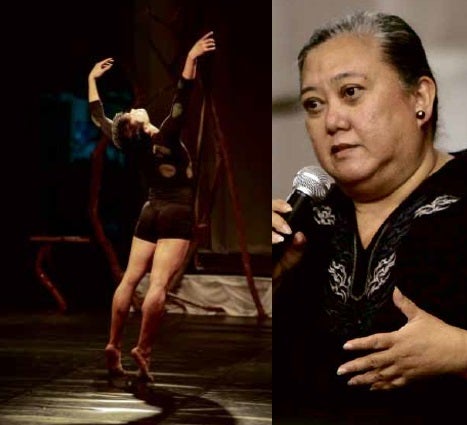 SONNY Locsin in a high release; Agnes Locsin educates people on appreciating the beauty and function of trees. PHOTOS BY JOJO MAMANGUN

Choreographer Agnes Locsin has an advocacy: Save the trees.  We need to recoup our forests to check the flooding of our cities, she said.

Her latest work, “Sanga” (Branch), the fourth  installment of  her “Alay sa Puno” (Homage to Trees) series, premiered at her Davao studio just after Tropical Storm “Maring” had battered Luzon. The piece wasn’t so much about the assault of nature as the celebration of the happiness that nature affords people.

“Alay sa Puno”  not only furthered Agnes’ ecological advocacy but also enhanced the careers of her former wards from Ballet Philippines.  They are known not only for their exceptional clarity when dancing and penchant for risk-taking, but also for intensely getting inside their characters. Although Agnes’ dancers exude linear purity and fluidity in their buoyant jumps and graceful turns, they all bear the weighted power associated with the Martha Graham technique.

“This series is a dancers’ showcase. Dancers test their mettle,” said Agnes.

“Alay sa Puno” kicked off with “Ugat” (Root),  with a heartfelt rendering by Biag Gaongen.

“Dahon” (Leaf) was an interpretation of Ricardo de Ungria’s poem; it was rapturously danced by Georgette Sanchez. It depicted how the elements nurture a tree.

“Puno” (Trunk) brought attention to the extinction of hardwoods and other endangered forest species. It started with  Gaye Galiluyo and Sanchez falling down in one piece and rolling on the floor like logs. Later in the work, they carried cardboard houses and engaged in a playful banter like two neighbors in a private village.

The audience were bowled over by their virtuosity and the humor. However, one of the messages was all about how the logs end up in private residential developments which were once open fields,  implying that commercial development of agricultural lands has abetted flooding.

In “Sanga,” De Ungria sat through rehearsals to write the poetry.

“It’s a complicated poem about memory, creation, conservation, tree, writing and art,” he said. “Since Agnes has  an advocacy, there has to be a didactic element. I didn’t want it to be hard sell though.”

The poems became prologues to four sections which not only introduced the next scene but also briefly  summarized the previous part.

“It starts with (the aftermath of)  the strife, the recession of the floods,” said De Ungria. “The second movement is about the enjoyment of summer with falling petals (in the studio) to give the impression of trees around the place. The third is about destruction and the last is reconciliation with the self,  with others and with nature.”

“Sanga” was set to Carl Orff’s “Carmina Burana,” which was originally  inspired by ballads of wandering monks. The German composer penned it  as a cantata, a composition for a chorus in different parts with orchestra accompaniment. Without the lush broadness of the choir and various  instruments, the piano version revealed its earthiness, amid tricky rhythms and constant tempo shifts. Instead of literally following the music, the dancers internalized the music’s dramatic contours which they breathed through their bodies.

In essence, “Sanga” was an abstract choreography which capitalized on the strengths of the featured dancers: Sonny Locsin of Ballet Oper AmRhein in Dusseldorf, Germany, and KrisBelle Palicbar-Mamangun, formerly of Cirque de Soleil (Macau). They were students of Agnes’ late mother, Carmen Dakudao.

The piece began with duets of  Sonny and Mamangun creating angular forms that evoked  the skeletal silhouettes of the bare trees in the background. Clad in shorts and cut-off green and black tights as tops, they went under and over each other like intermingling branches.

Agnes wove out her own poetic textures using exploratory movements,  classical and contemporary vocabularies. There were recognizable trademarks from the Graham technique aside from the abstract rendering of the theme—the use of extended garters (Graham used ropes and ribbons), the flexed foot, pencil turns, the sudden falls, the explosive jumps from a crouched position. They held on to their ankles and swung their torsos with flailing arms.

Later in the pas de deux, Mamangun went on pointe to show off a longer line, perhaps symbolic of a tree extending its branches.

Agnes is blessed with gifted dancers, who could indulge in bravura such as standing splits on a pivot, multiple turns, variations of turning leaps, turns taking off a plank position, and hand stands with big kicks.

When Mamangun hoisted herself horizontally on the tree, a matron cried, “Ay, pole dancing!”

“I don’t consider myself as cerebral. I just interpret what I feel,” explained Agnes on her work.

Our verdict: As in “Sabel” and the “Puno” series, the compelling performances carried the composition. Sonny and Mamangun are blessed with breathtaking dexterity, resilient energy in their movements and elastic leaps that bespoke of urgency and grace. Still, it takes choreographic savvy to show top-calibre dancers in an amazing manner—with a message to match.

“Sanga” told us about nature’s role in giving us hope—if they were left untouched and unravaged.

Unfortunately, “Sanga” cannot  have a Manila run for lack of financial support. While government officials and their cohorts siphon pork barrel from taxpayer’s money to ghost project to finance their lavish lifestyle, there are many deserving artists, whose works could uplift society, that don’t get any  support from public funds.

Agnes’ modest production should make the nation aware of our misplaced priorities.