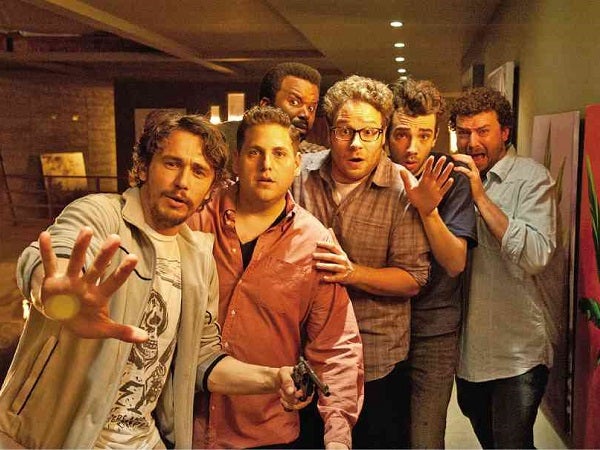 Emma Watson, Rihanna, James Franco and 20 others in one movie

Walking around the set of their most recent movie, the apocalyptic rib-tickler “This Is The End,” comedy superstar Seth Rogen and his longtime friend and collaborator Evan Goldberg had to stop and pinch themselves. They couldn’t believe their eyes.

“We would walk past the catering table and Rihanna would be getting a cup of coffee, chatting with Emma Watson,” recalls Goldberg with a chuckle. “And it was like, ‘What the…! How did we get ourselves here?’”

Says Rogen: “There were some days when you looked at the call sheet, and there were 20 or so famous people and you were like, ‘It’s crazy!’ Just seeing them all—I got a kick out of standing back and watching them all interact.”

The 20 or so famous people gathered for “This Is The End” include Rogen himself, James Franco, Jonah Hill, Danny McBride, Jay Baruchel and Craig Robinson, plus a host of other faces, all of whom play versions of themselves on-screen.

“We go either with or against what the audience expects,” explains Rogen of the cast. “With James Franco, for example, people kind of perceive him as arty and into that kind of thing, so those are all the ideas we played into with him.

“With Jonah Hill, on the other hand, we actually went in the opposite direction. He is known for doing characters who are assertive and mean in some way and sarcastic, and that’s the way we originally wrote him. But then he said, ‘I kind of want to be the exact opposite.’ So that’s what we did.

“Craig’s performance in the film is really amazing,” Rogen adds. “There are several scenes that are very dramatically charged, but because they have jokes in them, he will not get credit for it as an actor. But it is actually great acting.”

Goldberg agrees: “Also, I think Jonah did a really good job in this movie, maybe a better performance than in ‘Moneyball.’”

Rogen laughs. “Exactly! But he will not get nominated for this one!”

In the film, Rogen and his five friends are trapped in Franco’s swanky Los Angeles home following a series of strange and catastrophic events that devastate the city. As doomsday unfolds, dwindling supplies and cabin fever threaten to tear friendships apart.

“This Is The End” is an R-rated comedy, and Rogen and Goldberg direct for the first time. They’ve been developing the project for seven years.

“The first day on set, we were so excited that we finished three hours early,” recounts Rogen. “I think we were a bit worried. That is the biggest fear of the director, that you are not really going to get it all. It took me almost a week to accept that we will get it all.”

Rogen says he and Goldberg wanted to ensure that the viewer was “the seventh person stuck in the house. So we wanted a lot of handheld camerawork, (but) not a lot of weird angles. We wanted almost every angle of the movie to be something you would see if you were standing there watching.”

Goldberg and Rogen have gone on to work on a string of hit films as writers and/or producers, including “Knocked Up,” “Pineapple Express,” “Funny People,” “The Green Hornet,” “50/50,” “The Watch,” and “The Guilt Trip.”

“We’ve produced so much more than we directed, obviously, so it was kind of a weird transition in your brain to go, ‘Oh, it’s not my job to worry if we are done in time,’” says Rogen. “It’s my job to just get everything we need to edit a good movie together, and it is other people’s jobs to worry about whether it is taking too long!”

Goldberg says they were desperate to make the best use of their large and stellar cast, including Emma Watson. “We sought Emma very hard. We really wanted her to be in the film. And we saw the ‘Harry Potter’ films and we liked them all. We knew if she could do all 45 of those films, she’d be OK!”

He adds: “We were prepared with jokes in case she didn’t want to improvise, but two hours into it she’s throwing it out there just like all the guys. Same with Rihanna.”

Some of the filmmakers’ fondest memories are during the playback sessions at the end of a day’s filming. “The cast used to watch playback as a group, and you walked in there and there would be literally 15 famous people, all clumped together,” says Goldberg. “And the best part was that no one wanted to be the jerk, so everyone was really cool and courteous.”

Rogen says, “Exactly! They kept each other in check.”

Distributed by Columbia Pictures, the local office of Sony Pictures Releasing International, “This Is The End” will be shown exclusively at Ayala Malls Cinemas nationwide starting Sept. 11.