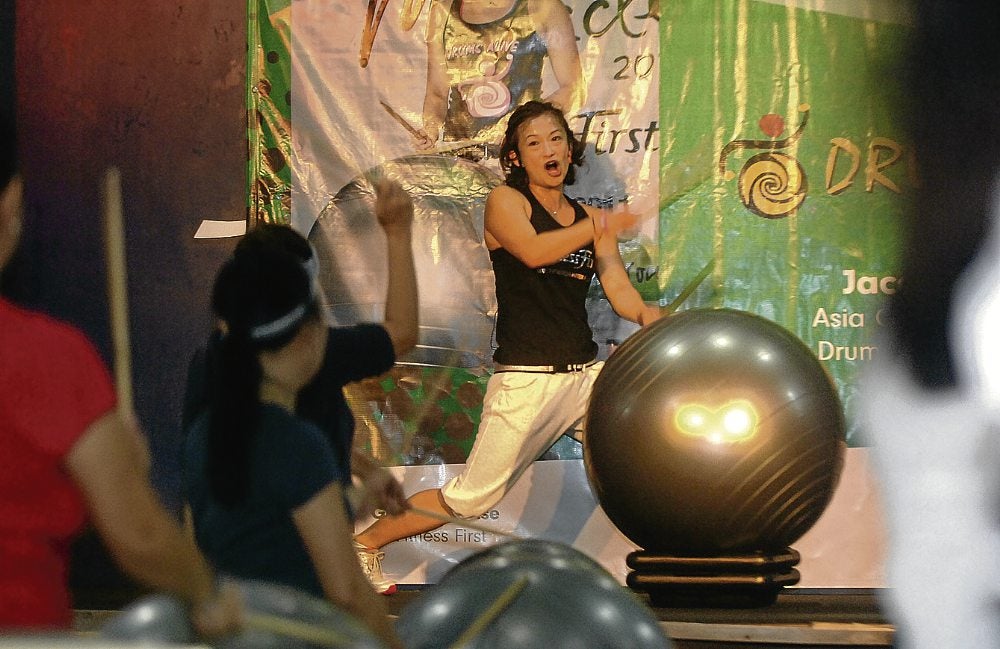 Bang your way to health –and a real cardio workout 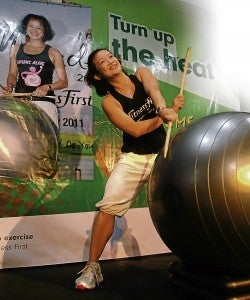 Who says you can’t have a ball exercising? A new group exercise program guarantees you will—along with a drumstick to bang it with.

Listen to the rhythmic beat of the music, feel your pulse accelerate, play the role of the drummer, and shout your heart out. There are no rules on form. Move the way you want to move. Yes, it’s Playtime 101 once again in the gym.

Called Drums Alive, the rhythm- and drumming-based fitness class engages both hemispheres of the brain as it improves coordination and increases the Alpha waves amplitude.

“Increased Alpha waves in the brain give you a feeling of restoration, renewal and relaxation,” said Jacqueline Wong, Fitness First Asia group exercise trainer and master trainer of Drums Alive.

Releasing tension and stress by beating a drum and shouting is just one of the benefits. The real effect is improving the neuropathway of the brain, enhancing sensory and motor coordination, and getting a good cardiovascular workout.

How good a cardio workout? The 5’2”, very fit and lean Wong recorded a maximum heart rate of 161bpm on her Polar wristwatch. The 114-lb Malaysian trainer also burned a total of 484 calories during the one-hour class. That means anyone can burn anywhere from 600-700 calories an hour, depending, of course, on how much energy one puts into the workout. 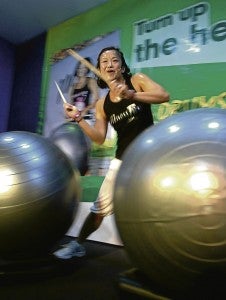 Wong said a recent study looking at drums as a physical workout also revealed that the heart rate of a drummer and the amount of calories he or she burns during a typical concert is equal to that of a professional football player during a match.

Drums Alive was created by Carrie Ekins, a professional dancer in Germany who had hip-replacement surgery. Used to an active lifestyle, Ekins plunged into depression when recovery from the surgery confined her to a wheelchair.

Frustrated and unable to walk, she started hitting boxes in her basement one day. Her mood changed, and she quickly began to feel good. When her condition improved, she moved from hitting boxes to banging stability balls, this time standing up.

Most fitness programs have a background in rehabilitation, said Wong. The famous Steps class in the ’90s, for example, was created by an athlete recovering from knee injury, she said.

While your upper body does a lot of work in Drums Alive, it is your footwork and movement that elevate your heart rate. The footwork is as simple as stepping to the side, front or back. Nothing complicated here. This is, after all, not a dance class.

Music pumps at no less than 130 bpm, accelerating to more than 140 bpm as the class progresses. That’s a beat similar to the average heart rate of a fetus.

“There’s something very tribal about the rhythmic pulsing of the drums. It’s universal. We naturally respond to it, whether we can dance or not. We understood rhythm from the time we were in our mother’s womb,” Wong said.

Drums, she said, have been traditionally used in the past as a means to communicate, to connect, to celebrate. In wartime, continued Wong, people used drums to lift the spirit of the soldiers.

Trina Francisco, one of the first few students of Wong’s Drums Alive class in the country, said she had a lot of fun, she didn’t notice the time. Working out for 25 years now, Francisco, who plays golf on weekends, said the best part of the class is the freedom to express yourself through music.

Most, if not all, fitness classes require one to follow rules—stand up straight, step your right foot this way, stretch your arm that way. Wong said with the introduction of Drums Alive, a new trend will one day emerge in fitness classes: that of not restraining participants with rules.

The philosophy behind this is, people tend to stick to exercise when they find something they like and enjoy. When they find a program that gives them freedom, that will not make them look awkward in a group of well-coordinated people, they will come back to it. Anyone, regardless of fitness level, can join and benefit from Drums Alive, she said.

“Classes that have strict rules on form usually require one to learn the form first before they get results. This one allows you to be you. You will come back because of the way the class made you feel, and you will get results,” said Wong.

Besides, she continued, where do you get the chance to whack a stability ball with a drumstick and shout? There aren’t that many opportunities to play and make noise anymore, she said.

The brain is not allowed to disengage, so movements are unpredictable and nonrepetitive. You can be hitting your ball one moment and banging it to your right the next, for instance, or clicking your sticks above your head and hitting the floor with it next.

“Seasoned exercisers always say they like it because it makes them think. Newbies normally feel the impact of the physical aspect of the program first,” she said.

Drums Alive will be offered at all Fitness First gyms beginning October.