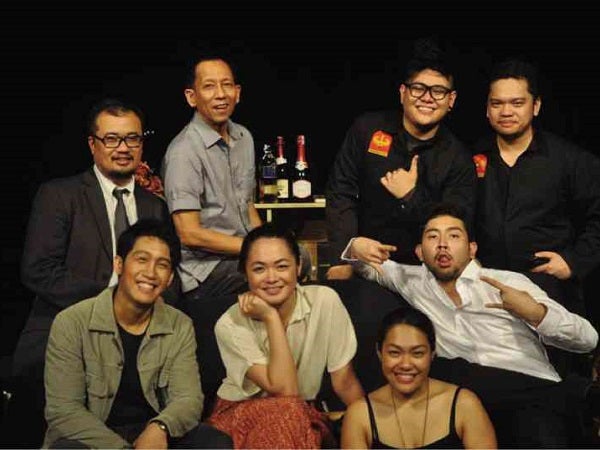 More than 200 participants from 10 countries and 15 schools met at Ho Chi Minh City, Vietnam, from Sept. 5-11 to join a week-long series of performances and workshops that marked the 2013 Asia-Pacific Bureau (APB) Festival of Theater Schools.

A team from the Theater Arts/Fine Arts program of the Ateneo de Manila University and a delegation from Mindanao State University-Iligan Institute of Technology’s Integrated Performing Arts Guild (IPAG) were invited to represent the Philippines in the regional festival—which, according to Tobias Bianconne, director general of the International Theater Institute, was “the best one” he has ever attended.

All invited theater schools were asked to send a maximum of eight representatives each and to present a workshop production of a play that will run for an hour or less. Faculty members were enjoined to give workshops to highlight their pedagogical strategies and/or present an academic paper, while students were invited to join these workshops and participate in a collaborative theater project for the festival’s closing ceremonies.

The Ateneo delegation, which I led (disclosure: I am a member of the APB board of directors), included playwright and faculty member Glenn Sevilla Mas; theater arts students Arion Sanchez and Angelique Basa; Ateneo Theater Arts alumni Brian Sy and Jacinda Lopez; Tanghalang Ateneo technical staff Reamur David, who did the sounds and graphics design, and Daniel Cortezano, who was lights designer and technical director.

Theater arts alumnus Charles Yee designed the set and costumes. The team received travel support from the Ateneo de Manila’s School of Humanities and the Sannggunian ng Mga Mag-aaral of the Loyola Schools.

Country productions displayed diverse styles, many of them drawing impressively from texts and movement forms indigenous to their cultural heritage—and most often, in the local language. IPAG’s production, “Uwahig,” seen at the CCP’s National Theater Festival last November, drew raves for its intense staging of a Minadanaoan myth.

In contrast, Ateneo fielded “The Boxes,” a Pinter-esque Filipino play that National Artist Rolando Tinio wrote for his wife Ella Luansing. The play, set in a Greenhills condominium in the 1970s, won unanimous praise for its acting, notably the performance of Jacinda Lopez who played Joy, the nerve-wracked victim of a terrorist organization.

Equally lauded were the performances of Brian Sy as Mandy, the operative assigned to oversee Joy’s work for the organization; Glenn Sevilla Mas as the mysterious insurance agent who pays Joy a surprise visit in the commandeered apartment; and Arion Sanchez who portrayed Bernie, a mute (his tongue has been cut by the terrorist group) assigned to Joy’s care.

All these characters, wittingly or unwittingly, drive Joy to a nervous breakdown and a stoic end. A special acknowledgement went to the technical team, David and Cortezano, as well as to the stage manager, Basa, who played cameo roles in the play.

“Your actors have a lot inside them,” professor Geong Ho Nam of Korea’s National School of the Arts told the team, “and this makes them able to project strong emotions.”

Many faculty members in the audience during the post-performance Q&A session agreed, their remarks summed up by special guest Arsenio Lisazo, a representative of the International University Theater Association, who declared that what the Philippine show exhibited was a “brilliant piece of acting.”

I realized that even participants who were not very conversant in English could easily follow the rhythm and phrasing of Shakespearean lines. The workshops were each conducted for three consecutive mornings to enable students to join several workshops during the festival days.

The workshops were favorably received by the participants, many of whom said that they now found playwriting and Shakespeare less intimidating than before.

The afternoon workshops tackled special skills, as well as an improvisational session for students who were interested in joining a show slated for the closing ceremonies. The Ateneo team was most active in a movement workshop conducted by Korean professor Nam, who studied mime in France under Marcel Marceau.

Four members of the team—Sy, Basa, Sanchez and Cortezano—also spent three additional afternoon sessions doing improvisational movement studies that formed part of a 20-minute performance for the festival’s closing  ceremonies. Along with me were two other teachers who facilitated the workshop: Jeff Janisheski from Australia’s National Institute of Dramatic Art and Janys Allen from the University of Wollongong, also in Australia.

The performance was a huge success, leading delegates to come together in an emotional, hand-touching ritual capped by a collective song and dance.  The performance clinched a multicultural bond among delegates, and among the students most of all, a bond that grew from day to day as students spent a lot of time together on and off festival hours.

It was the third time for the Ateneo Theater Arts to join the Asia-Pacific Bureau Festival of Theater Schools. The first, in 2009, was held in Shanghai; the second in 2012, held in Taipei.

Next year, the APB Board has agreed to hold the festival in Shanghai and be co-hosted with Beijing. Vietnam also offered to again host a meeting in 2015 to coincide with the International Cultural Festival in Hue. The board also unanimously accepted as new members the MSU-IIT’s IPAG as the second Philippine representative to the APB, and Hoseo University as the second representative from Korea.

The joint participation of Ateneo Theater Arts and MSU-IIT’s IPAG in future festivals will boost the Philippine presence in the Asia-Pacific theater scene, allowing greater international recognition of Filipino theater—its artists, forms, texts and spirit; what’s inside us.