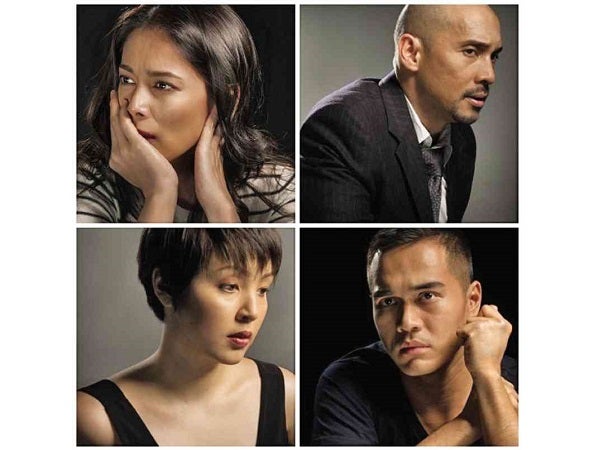 It’s been a year of firsts for Angel Aquino.

A few months ago, she started making her own water kefir—sugar water or juice that has been fermented with grains that contain bacteria and yeasts. “I started out with four tablespoons of kefir grains and now I have five jugs of kefir water,” she says.

Aquino discovered water kefir from a friend and decided to brew her own. “I have friends who are vegetarians and their healthy eating habits seem to be rubbing off on me,” she says. She brings a glass bottle filled with the amber liquid, rich in probiotics and B vitamins, everywhere she goes.

This year, she is also debuting in her first full-length play in English. Aquino is in Patrick Marber’s “Closer,” Red Turnip’s maiden production. Directed by Ana Abad Santos, the play is a four-character piece that deals with relationships and betrayal.

She is sharing the stage with Cris Villonco, Bart Guingona and Marc Abaya. “Closer” has been adapted into a film version directed by Mike Nichols and starring Julia Roberts, Jude Law, Natalie Portman and Clive Owen.

Feeling shy and awkward in high school, Aquino had never done any school activity that involved performing. In college, she broke out of her shell in a very big way. Discovered by film director Jeffrey Jeturian in a mall, she became one of the country’s top fashion models.

She transitioned to acting in time, debuting in the film “Mumbaki,” written by Amado Lacuesta and Butch Perez, directed by Perez. Many award-winning movie roles and television hosting stints followed. A recent credit is “On the Job,” written by Erik Matti and Michiko Yamamoto, directed by Matti. The film premiered at this year’s Quinzaine des Réalisateurs (Directors’ Fortnight), a section of the Cannes International Film Festival.

Her first foray on stage was in 2002, performing a single monologue in “The Vagina Monologues” staged by New Voice Company, at the Folk Arts Theater, no less. And, later that same year, in a restaging as only one of three actresses for the whole show.

Aquino was intrigued by the film version of “Closer” when it came out in the cinemas. “I bought two DVD copies because the first one didn’t work. The second one ended up not working, too,” she recalls.

Which apparently prefigured her eventual involvement in the play. “When I prepare for a role, I want to come in with a clean slate, without having seen previous versions. I want to do my own take,” she says.

Aquino is thankful for the warm acceptance of her fellow actors, since she needed to calibrate her acting methods.

“[In movies and TV] our scenes are very short, the emotions are there and then they’re gone, unlike in a play where it’s two hours straight,” she explains. “I have to shift the underplaying I am more used to. I have a hard time going ‘overboard.’ It’s not the kind of space I give myself.”

At first, “I asked myself what I got myself into, opening myself up to criticism, feeling vulnerable… But I don’t like staying in my comfort zone. So it’s a new kind of learning for me. It’s a new monster I have to conquer.”