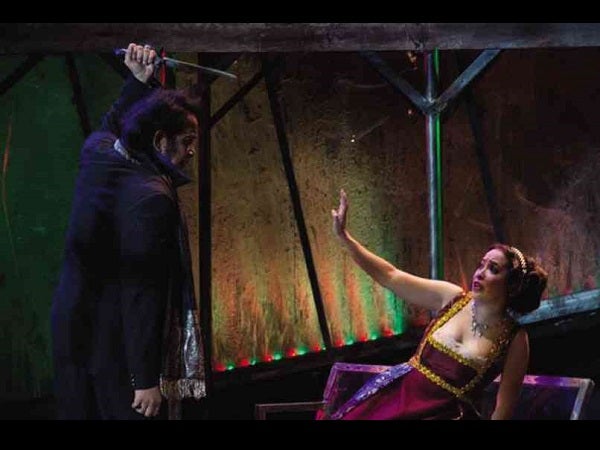 I was pleasantly surprised to see a sizeable swarm of high school seniors being shepherded into UP’s Guerrero theater last Sunday. After seeing the play, I have to wonder what they’re thinking.

“The Duchess of Malfi” is not child-friendly fare. It is dense, complex, massively sexualized, and tells a story of debauchery and tragedy to rival Tolstoy’s “Anna Karenina.” John Webster’s vision, 400 years old now, of people succumbing to temptation, madness and violence, is not a natural fit for the mind-set of your typical Philippine theatergoer. But Dulaang UP is clearly betting on its enduring power.

The play’s key character is, surprisingly, Bosola. The eponymous Duchess, in a bold move by Webster, dies barely halfway into the play. Bosola was played last Saturday by Richard Cunanan, whose skill and ability to play an audience threatened to overshadow the other actors.

Bosola is the play’s moral fulcrum, its source of ambiguity, and its wellspring of comic relief. He is remarkably successful at making us laugh even as he confronts hypocrisy and horror.

The story, well-known, is part feminist tract, part passion play.  The Duchess, played here with emotional torque by Adriana Agcaoili, is rightly acclaimed as a literary character, and her fate will no doubt succeed in making the audience question how society controls its women.

Bosola’s character arc, on the other hand, is a remarkably solid story of a man slipping into evil from the moment of first temptation to the failure of his attempt at redemption. The story of “The Duchess of Malfi” is well-executed, but quite depressing, as characters try and fail to transcend their circumstances or make up for their sins.

A lot of effort went into this production; the lighting, set design and costumes are superb. The lighting, often subtle, sometimes lurid, is used to set the tone for each scene, and is successful at accentuating both hellish madness and gilded pleasure.

The set’s key piece is the large bifurcated staircase, which serves as both prop and metaphor. Not for nothing does the Duchess’ descent begin on a staircase as a young woman and end underneath it as a ghost. Powerful images like this abound in the play. I found the final scene with young Achilles Reblando to be quite chilling, despite the aura of innocent cuteness he exudes during the rest of the story.

The costumes and props are generally well-done, but anachronistic. Why spend so much effort to make the Cardinal and the Duchess look so fantastically period-appropriate, and then saddle Julia and Bosola with what are clearly 21st-century handguns?

But this is nitpicking. The biggest flaw of the production is that the actors are not equipped with microphones, meaning that they have to nearly shout their lines. When combined with the archaic English used in the play, this is a strain on the audience’s suspension of disbelief.

Its imagery is violent, macabre, and had even this jaded Literature professor squirming in his seat at times. For these reasons, I cannot recommend the play for younger audiences, the faint of heart, or those who just need to have a happy ending.

Don’t mistake this for criticism. The sex, violence and tragedy are essential and organic to the story, and Dulaang UP made a courageous decision not to censor or soften any of it.

This play refuses to dumb itself down for you. T.S. Eliot believed that art must be difficult in order to be worthwhile. If you share his sentiment, you will find “The Duchess of Malfi” a dark, powerful and thought-provoking addition to your theater calendar.