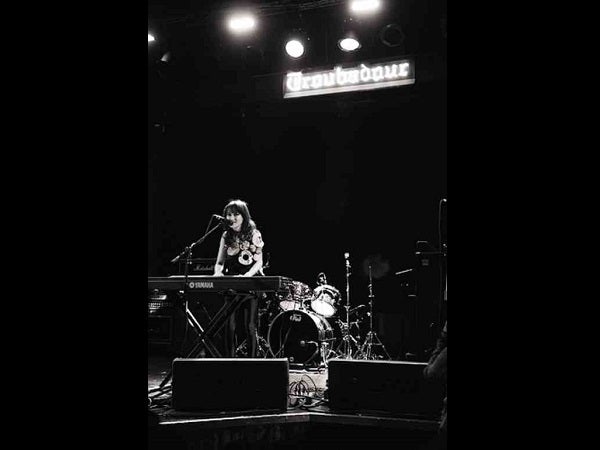 KATE playing at the legendary LA club Troubadour in January 2012

The musical world of Kate Torralba

For years, every time we’d run into Kate Torralba, we’d pester her with the same question: “When? When is it coming out?”

That day has finally arrived. Today, after five years of working on it in three different cities and four recording studios, Kate will launch her first album, aptly named “Long Overdue.”

The 11-track album is a labor of love for the musician who has had a lifelong passion for music. You may know her as a fashion designer with a penchant for bright pops of color, but music—that’s Kate’s first love. “I grew up in a music-loving family. There was always music in the house. My grandparents always had records,” Kate said, in an interview with Super inside her home in Makati.

Kate started singing at 2 and playing the piano at 4, “by accident,” she said. “My grandparents, mom and uncle decided to take piano lessons on weekends. Their teacher, Ben Casquejo, taught them all the piece ‘Moon River.’ For four hours every Saturday, no fail, I’d hear it playing. I kept saying ‘I want to play the piano,’ but they would say ‘You’re still a baby.’ And then one day daw, I just played the whole thing. I learned it by ear.”

Kate continued to play the piano throughout grade school, performing at school programs and recitals at St. Benedict’s in Cebu. She was only 9 when she was sent to Los Angeles to play in a concert featuring young Filipino prodigies. Kate also sang a lot, buying minus one cassette tapes of Basia, Patti Austin and Anita Baker.

In high school at St. Theresa’s College Cebu, her taste in music changed. “You start realizing, parang I’m not that cool. I was 12 and my brother turned me on to New Wave music, mga The Cure. I discovered Nirvana. I didn’t want to play the piano anymore, I didn’t want to be the nerd. I quit to the huge disappointment of my mom. I decided to pick up the electric guitar.”

That electric guitar kicked off Kate’s band life—first with X, where she was the only girl (“We played Nirvana.”), then with the Outskirts, an all-girl band (“We would play in the mall.”). Then, after spending one summer in the United States listening to Alanis Morissette and No Doubt, she returned and formed her own band, Hard Candy. “I said, this is the kind of music I want to do. I was singing in that band. I played really lousy violin.” Her band joined Channel V’s Battle of the Bands and they won. At the first San Miguel Beer Cebu Music Awards, they won five out of the 12 awards. “I cherish that time. It was all about the music.”

Hard Candy was getting ready to record its album but fate intervened. After graduating from college, Kate met Loren Legarda at a youth forum and she was offered a job as a legislative assistant. Kate made the big move to Manila, leaving her band behind. They were only able to finish two songs.

Kate, who had been making her own band costumes in Cebu, started selling clothes to make extra money. “I started making clothes when I was 18 because our couturier, Cary Santiago, decided to pursue greener pastures in the Middle East. My mom and I, we were Cary’s first devotees.”

After work, Kate would go to Sanctum for poetry readings and open mics. “That’s where I met my first creative family.  I started getting gigs there. I would borrow a keyboard and I would sing.”

Soon, she met Mike Villegas, formerly of Rizal Underground, and the two started      playing together. “I also found other guitar players like Perf de Castro and Ian Umali of POT. I was a virtual nobody, but for some reason these amazing guitar players cared enough to perform with me.”

Kate tagged along with a friend to the Preview Ball in 2002. There she met Tim Yap and Tessa Prieto-Valdes whom she likes to think of as her fairy godparents. She caught their attention because of the dress she was wearing—it was one she had designed herself. “Tim was the first person who ever called me a designer. Tessa started wearing my stuff with Joe Salazar and Rajo Laurel pieces.”

Soon, magazines were clamoring to feature her designs. Realizing there was a demand for her clothes, Kate joined bazaars. Then Gift Gate queen Virgie Ramos asked her to design for Hello Kitty. Soon, Kate had Fashion Week shows and a roster of regular clients. “I had no career plan. Everything happened so fast, I didn’t have time to process it,” she said.

At first, no matter how busy she got, Kate tried to find time for gigs. But fashion took over her life, leaving her with no time for music. “Someone told me I had to focus if I wanted to be really good. So for a few years, I just focused on fashion. But I was miserable. There was a part of me that was unfulfilled.”

In 2010, Kate decided to take a breather. “I said, ‘I can’t handle this anymore.’ I was so burnt out. I couldn’t design anymore, I couldn’t even draw. It just took so much out of me. I think with every creative person, it’s the business side that takes a toll on you.”

She went on sabbatical and finally had time to focus on her music. She and Malek Lopez of Drip and Rubber Inc. continued working on her record, which includes 11 tracks she wrote herself. “I’ve got to hand it to Malek for really pushing me.”

A chance encounter at an airport led Kate to another producer—Todd Hunter, who plays keyboards with Dionne Warwick. “I recorded a couple of tracks with him in LA. It was amazing. ’Yung drummer ko, si Raymond Pounds, drummer pa ni Stevie Wonder and Michael Jackson.”

Ciudad’s Mikey Amistoso, Itchyworms’ Jazz Nicolas and Tarsius’ and Pedicab’s Diego Mapa also coproduced some of the songs on the album, which features an impressive list of guest musicians including Outerhope’s Mike Benedicto, Freestyle’s and Barbie’s Cradle’s Rommel de la Cruz, Pupil’s Wendell Garcia, award-winning American cellist Dave Eggar, SOUND’s Sach Castillo and Radioactive Sago Project’s Junji Lerma. “Making the credits for the album was insane. So many musicians,” Kate said. Mixing was done in Paris and Manila by renowned engineers like Ken Stringfellow and DJ Brian Cua. The mastering was done in LA by S. Husky Höskulds, the Grammy-winning engineer for Norah Jones’ “Come Away With Me.”

Kate said, “It’s been an eye-opening journey. Challenges will really set you back and it’s not gonna be easy. You will get rejected a lot of times, you will run out of money, you will get tired. You have to keep going if you have a dream. This is a dream come true for me.”

Another turning point for Kate was the Elements Music Camp which Joey Ayala convinced her to join. “I met all these amazing mentors. These people I looked up to responded to my music.”

Most memorable for Kate was meeting Ryan Cayabyab. “I was a Smokey Mountain fan. I used break my curfew to watch ‘Ryan Ryan Musikahan.’ He says to me, ‘You’re Kate, I really love your song ‘Pictures.’’ I burst into tears. He was like my songwriting god.” Twinky Lagdameo, another mentor, brought Kate to the house of Ogie Alcasid. Kate played a song for him and Dingdong Avanzado and Ogie said, “What are you doing designing clothes?”

The gigs continued, with Kate also playing in the United States and in Europe. “Those gigs happened by accident. If I’m abroad, at a friend’s wedding, I’d extend my trip and maghahanap ako ng gigs. I’d go to open mics and I would just perform.”

She has also performed at Fête de la Musique both in Paris and in Manila and at the legendary Troubadour club. “Playing where Joni Mitchell, James Taylor and Carol King played was amazing. No Doubt had their first big LA gig there, too.”

Kate’s live shows are fun to watch. “When I play live, it’s very spontaneous. I have no set list. It’s fueled by adrenaline,” she said.

Kate’s first single is “Pictures,” about an old flame. And because her songs are inspired by previous relationships, her spiels sometimes include stories about ex-boyfriends. “The Adeles and Taylor Swifts of the world have done it, but everyone has a story to tell.”

At one gig in LA, she played a song about a guy from LA who broke her heart. “I was talking about him, and when I got off the stage, friends came up to me and said, ‘Kate he’s here.’ Now he knows it’s about him.”

Another guy is proud to have inspired one of Kate’s songs. “It’s not even a story to be proud of but this guy is like, ‘I was the muse of that song,’” she said, laughing.

A few months ago, Kate had her “Long Overdue” Little European Tour with stops in Berlin, Paris, London and Birmingham.

“Erlend Øye of Kings of Convenience and Whitest Boy Alive came to watch my Berlin debut.”

Kate still designs clothes but she says music gives her “the best high in the world.” “Fashion is a different kind of fulfillment. It’s visual, you’re happy when people wear your clothes or when you have a fashion show. With music, it’s so personal, I think that’s why it took me so long. That’s your heart out there.”

“Long Overdue” is distributed by MCA Universal. It will be available on iTunes and at music stores nationwide. To get info on Kate’s upcoming national and international tour, check out her Facebook page (www.facebook.com/katetorralba) and www.katetorralba.com. Follow @katetorralba on Twitter and Instagram.