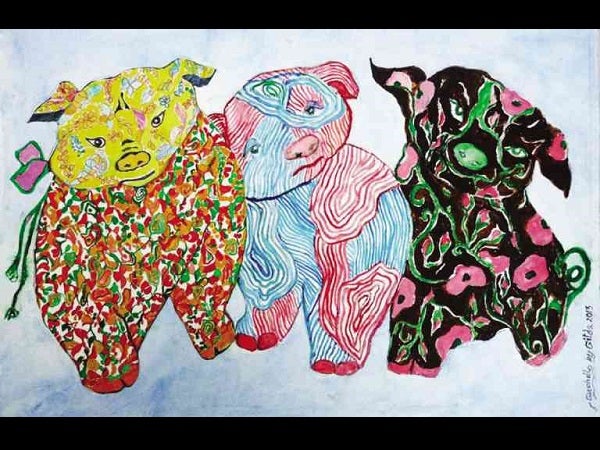 If you are a Filipino worth your sun and stars, you better make sure you have taught your children/grandchildren our folk song “Bahay Kubo.”  Shame on you if all they know is “Eensy Weensy Spider!”

The bahay kubo, from the Spanish word cubo or cube, usually a single room affair, was around since the 16th century and shares a lineage with the rest of Southeast Asia.  Apparently, so do the vegetables that surround it.  In case you have forgotten the folk song, here are the complete lyrics:

A fly in the ointment!  In his book, “1493, Uncovering the New World that Columbus Created,” Knopf, 2011, NY, Charles C. Mann writes, “Every one of those traditional garden plants is native to Africa, the Americas or East Asia. They are not Filipino natives and were, in fact, introduced species.”

An international plant activist, Mann promotes, as well as denounces, the good and bad effects of the Columbian plant exchange all over the world and the globalization that follows in its wake.  His book enumerates the edibles in the Filipino garden as follows:

And there is also radish, mustard,

And all around sesame seeds.

So inculturated are the Bahay Kubo plants that these are used almost daily in our kitchens.  Excluding their presence in sawsawan, or dipping sauces, here they are:

Singkamas – for lumpia; ingredient of kikiam

Mani – boil, fry, roast or dry in the sun

Patola – with misua and ground pork in soup

Upo – as peccadillo, with ground pork in broth

Sibuyas, kamatis, bawang – can’t do anything without them

Linga – To sprinkle on palitaw

So why did the ampalaya get wrinkled?  Because it got so sore at being left out of the Bahay Kubo list!

For years and years we were uneasy about being like our halo-halo; we don’t know what to be, we said, we can’t make up our mind.  The masa defined the culture for us.  Basta,  halo-halo.

All that freewheeling arose from the necessity to improvise and be colorful, instinctive and creative and to taste everything.  Accept all foreign influences, churn together and come out with our own distinctive blend.

Take the Filipino sari-sari store—why is all the merchandise displayed in front?  Simply because there’s no stockroom at the back!

All of it should end up a mess, but no matter how cramped the sari-sari store is, it’s always interesting to view.  Because the merchandise has become the art itself.

Much like the sari-sari, the Filipino personality is also like the traditional halo-halo that mixes the following:

Maybe at some point we didn’t realize that the secret of our rich flavor was our mix of endless ingredients and colonizer’s milk to blend them all.