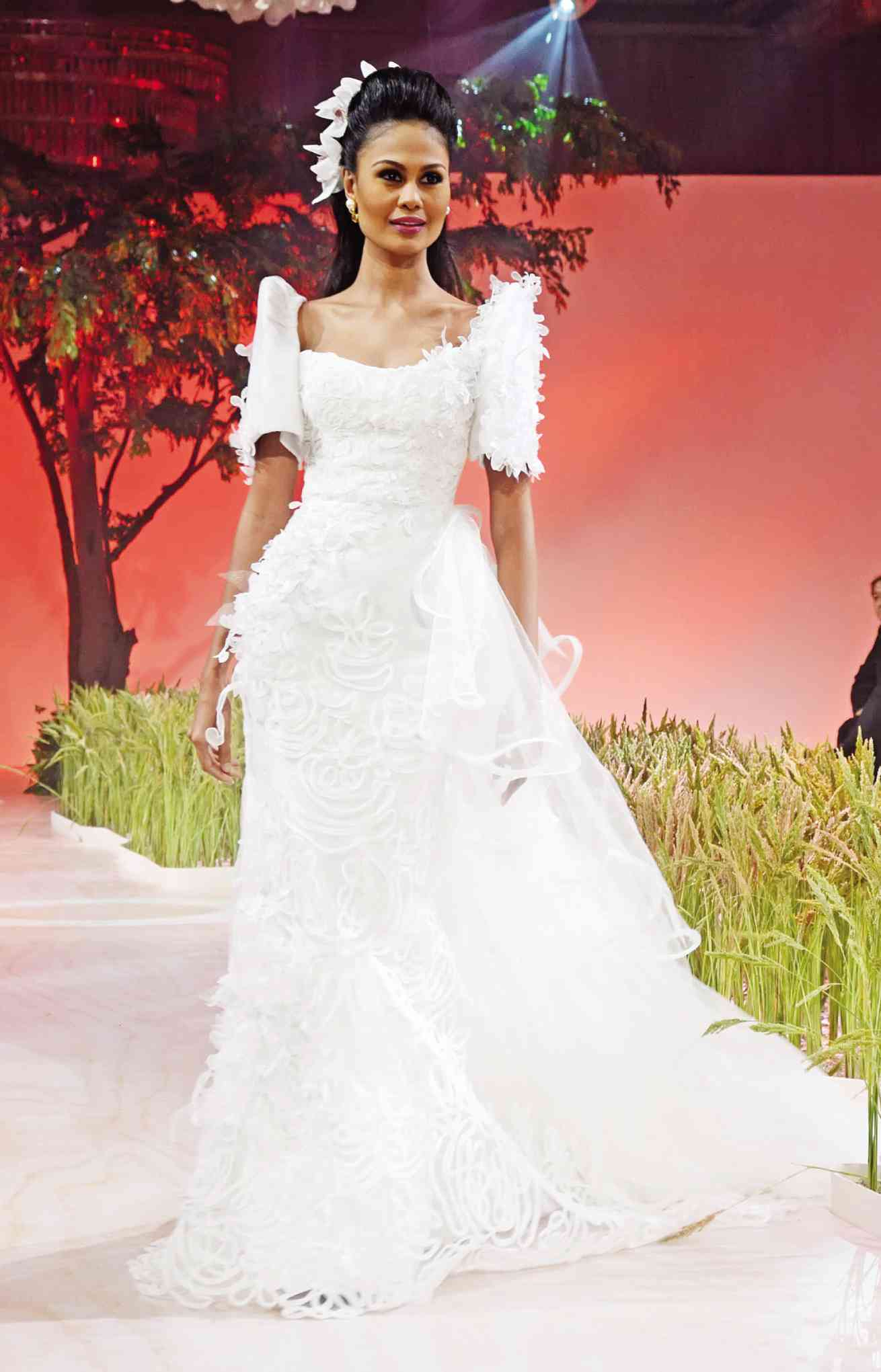 VENUS Raj in a dreamy terno with appliqués and embroidery.

The star-studded event marked the designer’s 25th year in the industry.

“Randy O Silver-Heaven on Earth” reaffirmed Ortiz’s mastery of seamlessly combining techniques, materials, references and challenging colors to produce dreamy and timeless pieces that were very much his own.

Produced by Inquirer Lifestyle, Look Magazine and Samsung, with Champion Infinity and Shokubutsu Hana shampoo as co-presenters, the gala show directed by Jackie Aquino was the last in the Face-Off series for 2013.

Aside from his signature strengths, Ortiz presented a great deal of embroidery, layering, draping, embellishment and juxtaposition of fabrics, textures and prints to achieve his vision. Some dresses, especially during the earlier part of the show, looked like vintage pieces due to his use of such materials as embroidered and appliquéd piña seda and silk in delicious but muted “sorbet” shades.

At the same time, Ortiz, 52, knew when to step on the brakes. Such self-imposed restraint comes with maturity. He was able to produce a tight and cohesive collection without “depriving my audience (of) seeing an explosion of colors, looks and techniques.

“Like most designers, I also love to hoard fabrics,” he said. “Some of these fabrics have been in my storage for 10, even 15 years. I wanted to use them when the need came, and this event turned out to be the right one.”

Ortiz, who started his career as a menswear designer, harked back to his roots by producing sharp, tight-fitting men’s suits in offbeat colors, textures and combination of materials.

He even did menswear in brocade and metallic fabrics such as silver, rust, teal, camel and forest green. He also combined several men’s jackets with pants made of textured and crinkled materials in different but complementary shades.

His expertise in tailoring was also evident in  women’s suits and smart, sculptural jackets and tops that seemed to channel Balenciaga.

The designer’s playful side was evident in pouf skirts, A-line dresses and wasp waists reminiscent of Dior’s “New Look.”

As the go-to designer of stars for red-carpet and wedding outfits, Ortiz proved his mettle in designing soft, floor-length dresses with intricately constructed tiers, ruffles and layers. He did clingy lace and semi-beaded see-through tops, paired with cigarette pants or huge animal-print skirts.

There was something for women of every age, shape and fashion sensibility. There were form-fitted silhouettes, tailored tops, as well as soft, fluid numbers that could camouflage their figures.

He had loose, embroidered and beaded pieces made of see-through lace and stretched tulle that left very little to the imagination. He also showed clingy, Victorian-inspired backless dresses with high necklines.

The show’s title had nothing to do with the collection; it was all about “my late parents Rodolfo and Lourdes,” his tribute to them.

The show was set originally for Sept. 28, his dad’s birthday and the day his mom passed away. The show was moved to a later date because of “logistics,” he said.

Ortiz was so overwhelmed by the outpouring of support, especially from his celebrity clients such as Richard Gomez, Lucy Torres, Ogie Alcasid, John Estrada, Rissa Mananquil-Trillo, Tweetie de Leon-Gonzalez and Dingdong Dantes. He was unable to hold back tears at the end of the show.

Apart from the black ternos he did for his female muses, Ortiz also showed a white terno spruced up with appliqués and embroidery on the sleeves, bodice and skirt worn by beauty

Celebrity models Rayver Cruz, Shamcey Supsup and Daniel Matsunaga also graced the floor-level ramp, which resembled a highway with islands of real wheat at the center.

“I always associate wheat fields with heaven,” Ortiz said. “It’s my idea of what heaven looks like—a dreamy walk through a vast field of wheat.”

Ortiz divided his show into several suites: Sorbet, Autumn, Sonata, Organica; and for the finale, Noir, Silver and Platin.

Ortiz used a total of 60 models and collaborated with 25 hair and makeup artists led by Henri Calayag.

“Since I was telling a story through my clothes, I had to study the coloring, silhouettes and combination of materials from beginning to end,” said Ortiz. “There were variances even in the embroidery, depending on the part of the show.”

Coming up with a cohesive collection was, for him, the most difficult task. He  thanked his sewers and staff without whom “none of these would be possible.”

“At the end of the day, a designer becomes more effective when he is able to come up with a cohesive show,” he said. “But no amount of technique I’ve envisioned would be translated into clothes without my staff’s help.”

Ortiz was originally set to do between 70 and 80 pieces, but when he realized how huge the runway was, he pushed himself and his collaborators to do 100 clothes.

“You know me naman,” he said with a giggle, “I’m like a girl scout. I’m always prepared for all sorts of eventuality.”

He and Inquirer Lifestyle editor Thelma Sioson-San Juan planned the show sometime in 2012, in time for the designer’s silver anniversary milestone this year.

“This collection was one year in the making,” said Ortiz. “But I would just do a few pieces at a time because we still had regular orders to attend to.”

As such, the show wasn’t about trends. The collection was more about Ortiz’s sensibilities and aesthetics as a designer as it was about his past.

“I drew a great deal of inspiration from my mother’s clothes,” he said. “She loved wearing ternos with plenty of embroidery, appliqué and beadwork. Since there were no designers in the province during those days, she designed her own dresses.”

Growing up in the 1960s in South Cotabato where his dad was a politician, an impressionable Ortiz used to accompany his fashion-forward mother to the dressmaker to have her clothes done. He was able to keep a great deal of her dresses, shoes, brooches and bags “just for the memories.”

“In so many words, I’m thankful and grateful,” he said. “This show is about giving thanks to everyone who helped me along the way. It’s also about celebration. I want to say thank you for the 25 good years as a designer, and 52 good years of my life.”