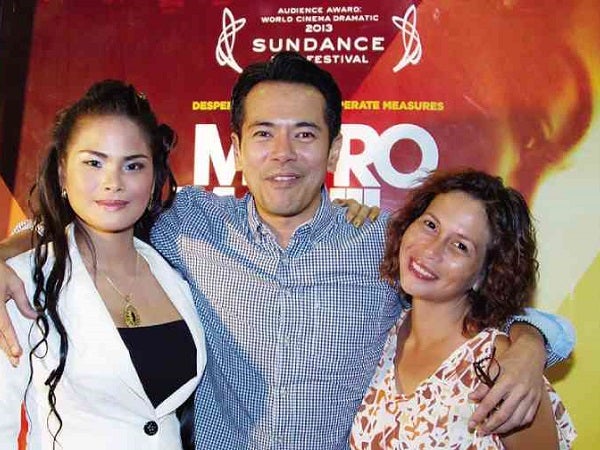 Written and directed by Sean Ellis, “Metro Manila” had won the Audience Award for best dramatic film at the Sundance Film Festival early this year.

Playing the role of Oscar Ramirez, the Banaue-born farmer-turned-security escort, Macapagal turns in a quiet, sensitive but powerful performance opposite the superb bad-guy character of John Arcilla. Asked what he thought was tough about his role, Macapagal says: “The challenge was being able to find my truth as a person and not indulge in it as an actor.”

In the preproduction phase of the project, Macapagal was the liaison man between the director and the production. “I helped out during the audition for Mai (the female lead) and read the part for Oscar. I was offered the role after that,” he recalls.

He noticed that British director Ellis was very collaborative right from the start: “We always had discussions before a shoot, and he made sure the translation, and everyone’s interpretation and comprehension of the scenes, were clear. He was very keen on catching the right light so he could get the mood that he wanted for each sequence. He is a great storyteller.”

The story of Oscar Ramirez, who was lured into the big city only to end up in its lower depths, is not unfamiliar to Macapagal. While preparing for the role, he admitted he didn’t have to look far to see Filipinos living lives of desperation and compromise.

“I had my own share of desperate moments in life,” he says. “My references are everywhere. All I did to clearly recreate the part was just open my eyes.”

When the film was entered in Sundance, it got good reviews and the Audience Award. “It was great to experience Park City celebrating independent cinema. The local residents were warm and active and made sure the city projected warmth during winter time. The conventions and parties were very organized and you instantly felt a sense of belonging,” he recalls.

Macapagal is tall and fairly well-built, but he doesn’t project himself like a lead star even in person. For many years, he was happy with ensemble roles both in theater and film.

His theater odyssey started quite early. He joined the Ateneo Children’s Theater (ACT) in Grade 4 after catching himself bewitched by a production of “Bernardo Carpio.”

“I joined the ACT as an activity club until its 50th anniversary, and played the role of Captain Hook at the Meralco Theater. Mr. Mariano Singson Jr. was my first mentor. He brought the cast to watch ‘Pippin,’ and I was astounded by the man in black with long legs who turned out to be Audie Gemora. I soon realized this was something I could aspire to do and enjoy for the rest of my life,” he says.

His early theater outings were very encouraging. At age 13, he auditioned for a Repertory Philippines show and botched his song. “There was silence after I sang and I immediately ran to my mother. This was the time I realized I had to learn more to prove my worth.”

At age 16, he was cast in the Alley Cats production of “Cats” and understudied for Ray-An Fuentes as Rum Tum Tugger.

“I was the youngest and most vulnerable,” he recalls. “I rehearsed for months and never got to play the role. It was when the reality of theater life set in. However, I was in awe of the talents that surrounded this cast, from Tony Fabella’s dancers to UP stalwarts, CCP principal dancers and wannabes like me.”

His biggest theater break was joining the German production of “Miss Saigon” from 1994 to ’99, and then its national tour in the United Kingdom for almost two years from 2001.

“That Miss Saigon exposure taught me a lot. It was my MBA in life. A huge bulk of my defining years were spent with the most talented and crazy people in the planet and I loved every second of it. I like the very routine of theater, especially its sense of discipline and sensitivity to others,” he says.

His resumé now also includes appearances in the Manila productions of “Les Miserables,” “My Fair Lady,” “Jack and the Beanstalk,” “Cabaret,” “Falsettos,” “Cats,” “Peter Pan,” “Once On This Island” and the Goethe Institute’s “Slipped Disc.” He played Angel in “Rent,” headlined “Hedwig and the Angry Inch” and “Aspects of Love,” and essayed major parts in “Next to Normal,” “A Little Night Music” and “West Side Story.”

Macapagal says his transition from theater to film was quite smooth: “It was like fitting a glove and feeling at ease instantly. But in the new medium, I realized I had much to learn, so I suddenly had the great urge to study some more.”

His seasoned chops have made Macapagal not only an in-demand actor for theater, film and TV, but also a popular teacher and mentor to younger performers. He had a blast directing a gaggle of campus actors for Ateneo Blue Repertory’s “Hair” a couple of years ago, and these days he is happy doing his acting workshops for aspiring actors at ABS-CBN.

“I am 47 years old and ready to face more challenges,” he says. “It’s great when you reach a peak in your career, but I make sure I am always ready to roll up my sleeves and work again.”