The long night’s journey into day that is ‘The Bluebird of Happiness’ | Lifestyle.INQ ❮ ❯ 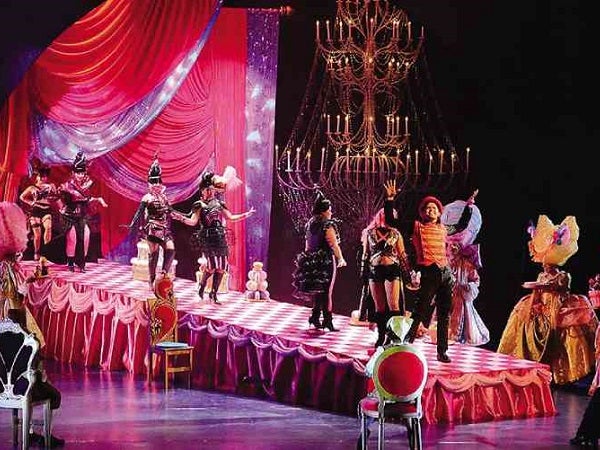 MIO INFANTE’S design of the Land of Luxury takes a leaf from “Alice in Wonderland”—all bright colors and ornate props, with a chandelier to rival “The Phantom of the Opera” at the back.

It is easy to dismiss Trumpets’ “The Bluebird of Happiness”—which the Christian theater company dubs its “big musical comeback”—as just another extravagantly fantastical, unrestrainedly colorful kiddie show. When the musical’s first promotional posters were unveiled online some months ago, the central image of two children heading into the bluish unknown with the eponymous bird hovering in a trail of glitter seemed like a black box warning for those allergic to the cutesy, the silly and juvenile.

But preconceptions be damned: “Bluebird” is hardly the stuff that kindergarten nap time storybooks nowadays are made of. In fact, that it sells itself, or appears to do so, as a children’s musical may just be its most golden move. Viewed in that context, this two-and-a-half-hour musical that runs at the Meralco Theater until Oct. 20 plays out like the offspring of a satire and a primetime evening sitcom.

“Bluebird” begins on Christmas Eve in the house of two siblings, Mytyl (Chimmi Kohchet-Chua) and Tyltyl (Anton Posadas)—apparently the only ones in their gift-obsessed village without presents. After finding out that the only surprise in store for them come morning is a caged bird from their parents, their moaning and whining prompts the arrival of Berylune, a loony, big-nosed fairy (Jennifer Villegas-dela Cruz), who sends them out into the freezing night to find the bluebird of happiness.

Accompanied by their transiently human pets, the dog Tylo (Robie Zialcita) and the cat Tylette (Lynn Sherman), and Light (Carla Guevara-Laforteza), the siblings embark on an entire night’s journey that might as well be the product of their wild imaginations.

That’s a rather typical method of sustaining interest in a children’s story, but in the hands of book writer, lyricist and director Jaime del Mundo, this adaptation of the Belgian philosopher Maurice Maeterlinck’s 20th-century play becomes a hilarious musical adventure brimming with a potpourri of pop culture and religious references.

In the Palace of Night (played by Joel Trinidad), the gigantic clock face from the opening scene of the Stephen Schwartz musical “Wicked” gets transported to the backdrop. In the Forest, the protagonists go head-to-head with angry talking trees, and one can only imagine how discussions on environmentalism would have turned out if these were really the ents from J.R.R. Tolkien’s “The Lord of Rings.”

In the Land of the Future, unborn children are sent off by Father Time (who can also be Jesus, or Aslan the lion from C.S. Lewis’ The Chronicles of Narnia”) via a stair-climbing ritual that, for theater geeks, calls to mind Grizabella ascending on a tire to the Heaviside Layer in Andrew Lloyd Webber’s “Cats.” And in cameo appearances—the flying ship from Disney’s “Peter Pan” and the fairy godmother’s song from Disney’s “Cinderella,” among others.

But the ubiquity and effective integration of puns and cat jokes aside, “Bluebird’s” book is also commendable for its bravery, its ambitious attempt to put a creative spin on a variety of themes.

Consider, for example, how each act opens with the song “Much More.” Yet, while the Act I version depicts the simple revelry of villagers on Christmas Eve, Act II’s is an illustration of excess in the Land of Luxury, where the siblings get lulled into wanton greed and end up squealing and getting physical (like how aggressive kids are wont to fight).

Further highlighting the Christian influence, Act I opens in the siblings’ home, which, in its sparseness and intimacy, may as well be the manger in the Nativity. The Act II opener, however, segues into “Living in the Lap of Luxury,” in which the seven deadly sins are personified Andrews-Sisters style while the “sinful” fighting kids are gleefully serenaded.

On that note, much praise should be lavished upon this production’s cast, who sang their way through opening night on Sept. 27 without a single bum note in sight.

But there are three standouts: Guevara-Laforteza, whose soprano and stratospheric belt is essentially behind the incandescence of her portrayal of Light; Trinidad, whose intelligent grasp of character and ease with comedy transforms Night into a charming, scene-stealing villain; and Kohchet-Chua, who perfectly captures Mytyl’s bratty but still charming persona, and whose unembellished delivery of the title song is one that child stage performers should learn from.

Mio Infante’s scenography, hand in hand with John Batalla’s lights, is also worthy of admiration. In particular, his design of the Land of Luxury takes a leaf from “Alice in Wonderland”—all bright colors and ornate props, with a chandelier to rival “The Phantom of the Opera” at the back.

And finally, there’s the score (music by Rony Fortich), which has the bearings of a mix tape eclectic enough for a long, leisurely drive.

After all the jokes, the occasional clichés, the isolated moments of preachiness that expose minute lapses in the writing, “Bluebird” makes one last jab at philosophizing: the idea of happiness as invisible, or personal. We see the children (spoiler alert!) peering into the covered cage at the bluebird, where it has been the entire time—but we never really see the bird for ourselves.

But to see them finally content in the simplicity and dignity of their place—that becomes the instructive reward for all the extravagance and wildness of their adventure, for their exhausting long night’s journey into Christmas Day.

Trumpets’ “The Bluebird of Happiness” runs until Oct. 20 at Meralco Theater. For tickets, call Trumpets at 9014364, or TicketWorld at 8919999; or visit www.ticketworld.com.ph.