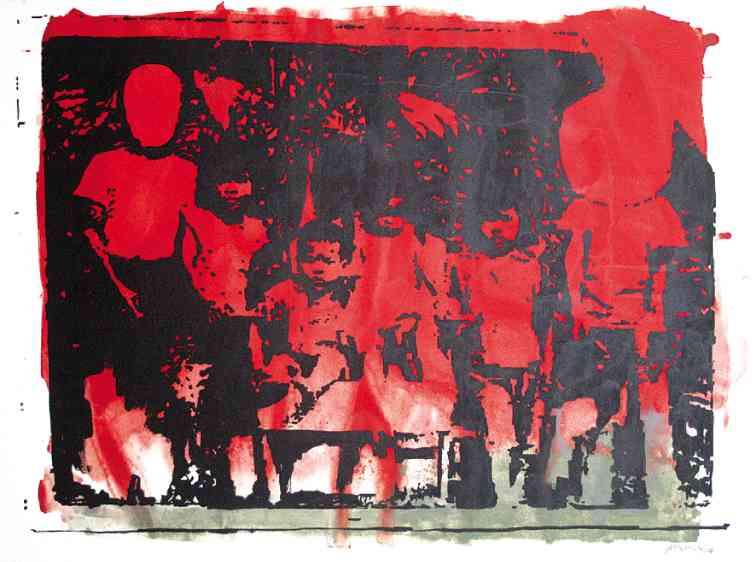 Freshly graduated from University of the Philippines College of Fine Arts (UP CFA) in 1985, RM de Leon’s first group show at the old Sining Kamalig in Pasay City  was a sellout.

De Leon was feeling pretty good about himself. But instead of heaping congratulatory praise on him, Bobby Chabet, his maestro in UP CFA said: “That has nothing to do with art. That’s kitchen stuff.” Chabet proceeded to throw a glass of beer at him and asked: “Where are you going from here?”

That was nearly 30 years ago. So, where has RM, short for Ramon Manuel, been? Well, for one, his art and talent have taken him abroad.

In 1988, on the invitation of the German artist Luciano Castelli and facilitated by the defunct Pinaglabanan Gallery, RM—with five other Filipino artists—went to Berlin to exhibit his 20-piece “Diary Series” at the Raab Gallery.

The next year found RM in Toyama Prefecture, Japan, showcasing the children’s workshop he facilitated at the 10th International Children’s Art Festival.

In 1997, he was at the Vermont Studio Center in the US as the first Filipino grantee of the Freeman Fellowship of the Studio Arts Scholarship Program.

The year 1990 had him winning the Thirteen Artists Award, an honor instituted by the CCP—and incidentally created by his mentor, Chabet—to give recognition to progressive young artists who push the artistic envelope. Indeed, RM had demonstrated— and continues to develop—a unique personal language and aesthetic.

His mastery of line and color enabled him to play with form while cheekily satirizing mainstream societal and artistic standards. His playful and sometimes disturbing, often bizarre, images engaged the viewers’ imagination, causing them to ponder on what they were beholding and the meaning of it all.

Extremely versatile, RM was equally comfortable with either the figurative or the abstract, with Renaissance or Gorsky, Disney or National Geographic.

And, often, to the consternation of some, he combined styles incongruously. But the whimsy and playfulness in his often jarring juxtapositions belied the depth of thought invested into form and composition; the thoughtfulness belied the spontaneity.

His audience lapped it up. Truly, art had made a way for RM. Looking back at the Chabet putdown, RM admits it rankled him. Only much, much later, did he come to the realization that that was the way his teacher was trying to spur him to greater heights. Older folk have a term for that: cariño brutal. It means brutal affection. For RM, at the time, it seemed only brutal.

Before his “mentor/tormentor”—as many of Chabet’s students lovingly describe their teacher—passed on, RM received what he cherishes as high praise from the master when Chabet, known for his uncanny intuition for talent, succinctly told him, “You have very good instincts, RM.”

In spite of the surge of ultra-trendy, emerging artists  each generation produces, RM has held his own for nearly three decades, and continues to impress art enthusiasts and collectors with his witty and bold presentations.

While there, one should take the opportunity to view the works of another ertswhile Chabet prodigy: Francesca “Keka” Enriquez.

This San Francisco-based artist is another one who hit the ground running. Even before her graduation from UP CFA in 1984, she had already mounted several exhibits and garnered awards for her artistic skill.

In the write-up for the Chabet 50-year retrospective mounted two years ago, Enriquez was acknowledged as one of the troika of  ’80s Chabet students who were “brash ‘kids,’ barely in their 20s… producing large canvases and painting with excess and abandon, working with unprecedented bravado and scale.”

Also a Thirteen Artists awardee, Enriquez has exhibited in Australia, Canada, Malaysia and the US.

Chabet used to customarily introduce his students to Vita Sarenas of Finale Art File. Vita recalls that Keka was one of those who stood out, along with De Leon. Enriquez was a bold and daring spirit on the forefront of the local art scene as she engaged the themes of the era.

Enriquez’s works, Sarenas says, were very expressive of her time. “You can read her in her paintings—intense, insecure, mad, happy, beautifully neurotic…”

Indeed, strong, thickly pigmented brushwork that render her paintings sensuously palpable are a hallmark of Enriquez’ works. She is especially known for her polychromatic domestic interiors which recalls Matisse’s Post-Impressionist works.

Along with the artworks of De Leon and Enriquez, Archivo 1984 will showcase historic works by Filipino masters and contemporary Filipino artists. Along with its eclectic furniture, historical memorabilia, literature and objets d’art, the Archivo 1984 booth promises to be a veritable treasure trove. Founded in 1984 by a quiet archivist, Archivo 1984 takes an intimate and distinct personal approach to curation. Rather than a trip to the typical white-walled gallery, a visit to Archivo is akin to a peek into a connoisseur’s living room where one can explore a private world and leisurely peruse art, literature, film and other memorabilia.

ManilArt 2013 will open with a gala night on Oct. 9 at the SMX Aura Convention Center in Bonifacio Global City. The art fair  runs  Oct. 10-13.