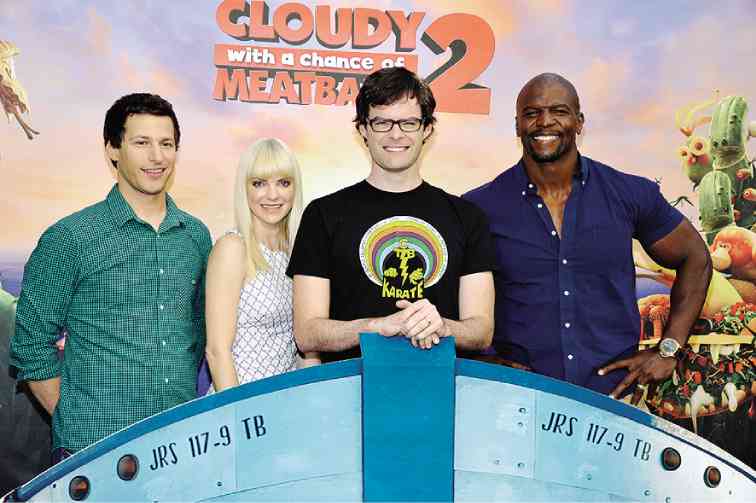 When it rains, food pours—and animals.

This is what happens in the second installment of the hit movie “Cloudy with a Chance of Meatballs,” which was inspired by the children’s book of the same name written by Judi Barrett and illustrated by Ron Barrett.

In the first film, the overly-ambitious Flint Lockwood (voiced by Bill Hader) desires to invent something novel and provide food for his town, aside from its staple, sardines. This leads him to the creation of a machine that transmutes water into solid food. But things go out of hand when the machine is pushed to its limit: creating a mayhem filled with spaghetti tornadoes, meatball asteroids, and hot lava cheese bent on destroying the once-peaceful town. With the help of his oddball friends, Flint stops the machine and restores the normalcy to the town.

Picking up 60 seconds after the first film, Lockwood, this time around, works for a corporation but is forced to leave when he finds out that the havoc-wrecking machine is still operational. And now it is generating what is called “foodimals,” a hybrid of food and animals.

Yet again, he and his friends embark on a journey where taste becomes a little sour as they battle ravenous tacodiles, shrimpanzees, hippotatomuses, cheespiders and other foodimals.

“I love the world of Cloudy,” said Cameron, who was the story board artist on the first three “Shrek” films, “Surf’s Up” and the first “Cloudy With a Chance of Meatballs. “Of all the films I’ve worked on, ‘Cloudy’ is my favorite. So, to get the chance to go back and revisit the characters in this new, crazy world that we were developing made this a really exciting project for me.”

Pearn, meanwhile, said that they were able to explore and experiment different things for the new film.

“When we started the brainstorming process, we found a very rich amount of elements to explore—not just a new adventure, but also the characters,” said Pearn, who headed the story team on the first “Cloudy” film. “On this adventure, all of the characters get to express themselves more fully.

For example, Earl (Crews), the town cop, wants to protect the home he loves so much. Manny (Bratt), who was silent throughout most of the first film, reveals more and more hidden sides of himself. Sam (Faris), the one person who understands Flint better than anybody else, sees the island for what it is—an expression of Flint’s creativity.”

Cameron and Pearn were handpicked to direct Part 2 by Phil Lord and Christopher Miller, the writers and directors of the first film.

“I think they saw how important it was to us to maintain the unique humor and quirkiness that made the first film so special as we embarked on the sequel,” said Pearn when they were brainstorming for the second installment of the film.

“Cloudy With a Chance of Meatballs 2,” distributed by Columbia Pictures, opens on Oct. 9 nationwide.