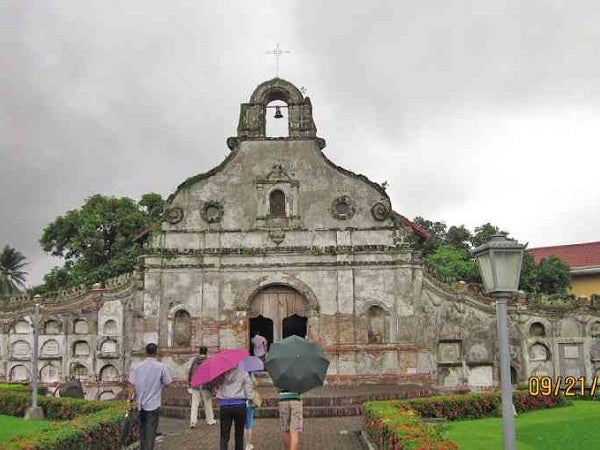 CHAPEL of the Underground Cemetery in Nagcarlan. Photo by Amadís Ma. Guerrero

A caravan tour of historic Laguna

La Laguna, as it was known then, was one of the eight Philippine provinces declared under martial law by Spanish Governor Blanco in 1896.

The initial successes of Filipino rebels in Cavite had inspired other nearby provinces. And so the uprising in La Laguna (now just Laguna) began, but it had comic opera overtones.

In “The Revolt of the Masses,” Teodoro Agoncillo tells the story of one Mateo Andas who, caparisoned in a Komedya costume, went around town shouting “masón, masón!” to scare the cuadrilleros who had been brainwashed by the friars to fear and despise the masons.

“Instead of shooting, the police dropped their guns and scampered away—the very thing Andas had anticipated,” Agoncillo wrote. “With the guns taken from the superstitious policemen, the rebels started the revolt against the Spanish authorities in the province.”

And so, one day recently, we returned to the towns and cities of historic Laguna at the invitation of the other AAP (Automobile Association of the Philippines) or more specifically AAP Travel, which is chaired by Mina T. Gabor, former tourism secretary.

It was AAP Travel’s annual drive tour caravan, and the mayors, city/municipal hall officials and employees in San Pablo City, Nagcarlan, Liliw and Los Baños City, rolled out the welcome mat for the caravan participants.

Supertyphoon “Odette” was menacing the northern provinces that day, and the caravan was buffeted by winds and pelted with rain from time to time; but the inclement weather was not enough to mar the generally festive atmosphere. There was even a police escort team and an ambulance, “if only because we sometimes overeat,” as Gabor put it.

Indeed, it was also a food trip, with the tables groaning with native buffet and all sorts of kakanin, snacks, rice cakes, suman, buchi, etc. being offered to you. Aah, those sweets. It was a sin to partake of these delicacies when you were watching your sugar level, but it was a greater sin to refuse. So, indulge.

Along with performances, there was a late breakfast at green-laden Sitio de Amor Farm Resort in San Pablo City. And, among other delectable items, we feasted on crackling squid.

Nagcarlan is known for its underground cemetery, announced by an ornate, undulating courtyard and chapel. The cemetery is rather small and dimly lighted, with one barred window letting in the sunlight. It’s not really that exciting but, well, it’s unique. Do the souls of the departed visit the place? “Opo (yes),” said one tour guide. “But they are harmless, good spirits.”

Liliw is known for its art and crafts, specifically its quality footwear. You can shop till you drop here, as some in the caravan did. But for me the attraction was the baroque church dedicated to St. John the Baptizer.

All-girl dancers supported by an all-boys drum and lyre band welcomed us to the heritage town of Pila, and there was even a bevy of attractive Maria Claras in formation on the platform steps. This gig was arranged by the Department of Tourism Southern Tagalog Region.

The last stop was at Los Baños City, specifically the Riceworld Museum and the Makiling Botanical Gardens. The museum is impressive and just about all you want to ask about rice is here. “Despite all this, we are not self-sufficient in rice,” observed one participant.

The Makiling Botanical Gardens, with their flora and fauna from various parts of the country and from abroad, are dedicated to nature education and outdoor recreation. Unfortunately, night had descended by the time we arrived. And we had to settle for a film and lecture (by a fired-up educator) on how to save the rainforest from those seeking to destroy it. Underscoring the point was a large diorama on the rainforest.

All and all, it was an enjoyable and instructive trip even for one who has been to the legendary province of Laguna many times before.