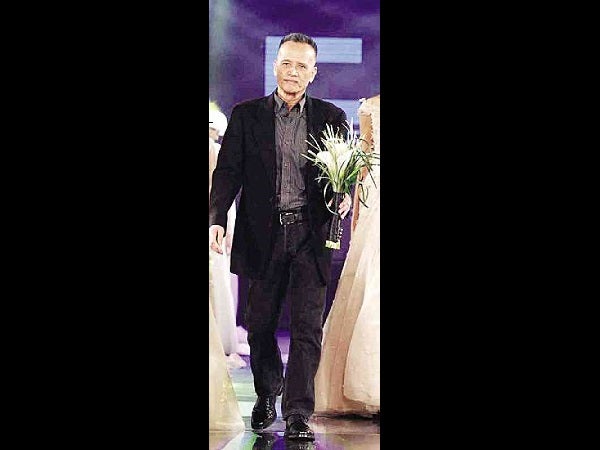 Why Efren Ocampo can relate to ‘My Husband’s Lover’

When the US Supreme Court declared Section 3 of the Defense of Marriage Act unconstitutional in July 2013, legally married gay and lesbian couples celebrated since they would now be able to receive the federal protections denied them. These protections included Social Security, veterans’ benefits, health insurance and retirement savings.

Although this landmark decision only directly affected gay and lesbian couples who were legally married in their home state, LGBT (lesbian, gay, bisexual and transgender) communities outside the US were also ecstatic since it signified a change for the better.

For veteran designer Efren Ocampo, however, it dredged up old memories of the years he spent living in New York in the late 1970s.

The openly gay designer told Inquirer Lifestyle over lunch in his spacious Manila home that he was a young student taking up Fashion Merchandising in New York at the time.

When that proved problematic, he threw in the towel and gave up. It was just as well because, by that time, his student visa was about to expire. Instead of taking his chances and staying on as an illegal alien, he decided to go back to the Philippines.

It has been almost 30 years since that fateful event, but Ocampo hasn’t fully forgotten it.

“Why were there so many hurdles we needed to surpass before we could be together?” he asked. What do gay and lesbian couples have to do to prove that their love is just as real, palpable and potent as the love shared between their heterosexual counterparts?

“Everyone should have the right to marry the one they love. Marriage is not about having children; it’s about the love of two people,” Ocampo said. “It’s that love that will keep people together whether they’re straight or gay.”

In the course of the lunch interview, the conversation segued to “My Husband’s Lover,” the hit soap opera on GMA-7 that follows the twists and travails of a married man, his wife and his gay lover. Ocampo said he and his friends religiously followed the daily drama that incidentally ended this week. The thoughtful treatment of the male protagonists appealed to him. The fact that actors Dennis Trillo and Tom Rodriguez look good on screen was a bonus.

“The show is over the top at times, but the topic is relevant and the issues ring true. It shows how society forces people to not be themselves. For me, it said, ‘Marry a woman and you can stay in the US,’ when I was in love with a man.”

At the time of the interview, Vincent, played by Rodriguez, was brought to a psychiatrist to find out what was wrong with him, why he was in love with another man. “What is there to cure?” said the understanding psychologist. “It’s the people around gay people who think they’re abnormal.”

“The sensitive way the writers and director present homosexuality made the series worth watching. It was very educational. My friends and I watched it; we could all relate to it,” Ocampo said.

This positive feedback is sure to please GMA executives. But the director of the series, Dominic Zapata, said he wasn’t even sure it would air.

“I was initially very apprehensive about tackling such a sensitive topic but when I read the script, I realized I could direct this because it was a love story. It just happens to be between two gay characters.”

To prepare for the shoots that would last until morning, Zapata said he listened to his gay friends.

“I looked at real people and I talked to real people. I found out that there are so many kinds of gay people. But ultimately, I wanted to come up with a program with a straight guy’s take.”

A gay series on primetime TV is bound to capture the interests of gay viewers and those with more enlightened minds—but housewives and professionals as well?

A lifestyle editor said that she followed the series because the treatment of the topic was very good.

“Usually gays in local movie or TV shows are treated as jokes or trotted out as comic relief. Here, they are treated respectfully and the plot is intelligent even if some characters’ subplots have been introduced too late in the game.”

What is truly remarkable, however, about the series is the fact that people were interested to find out what would happen in the end.

“The viewers are genuinely interested to find out if the boy gets the boy, stays with the girl or ends up with neither,” she said.

Ocampo is pleased that such “taboo” topics are now brought out in the open.

“Talking about it pushes the issue forward; it engages people in conversation,” he said.

Although there is still much bigotry in the country, he says it’s good to talk about these things and not just sweep them under the rug.

“Bigotry is born out of ignorance. If you get people talking, they become enlightened and hopefully more open,” Ocampo said.