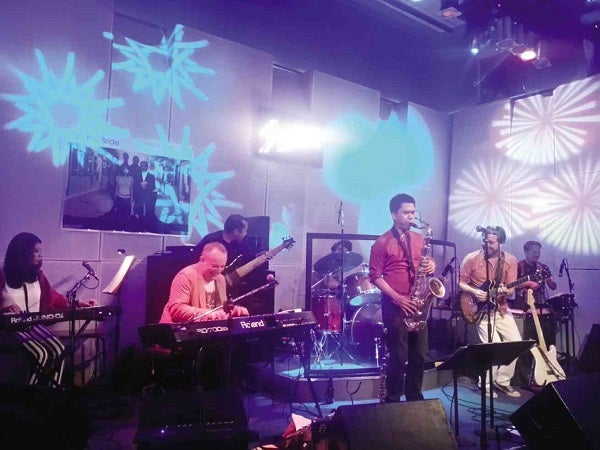 The chocolate truffle and gelato dessert at Solaire Resort and Casino’s Fresh restaurant gave us a nice kick while waiting for a special show featuring singer Annie Brazil at the hotel’s grand ballroom recently.

Brazil, the country’s jazz queen who started her career after World War II, just turned 80 and was visiting Manila (she’s based in New York). The gig was a tribute organized by her daughter-in-law, Veronica Tapia-Merk, and son Richard Merk.

Though we’ve seen Brazil perform a number of times at the old Merk’s Bar in Greenbelt 3, we wanted to find out this time how she would fare after undergoing hip replacement following a bad fall last year.

The thing about jazz artists is that they don’t really fade away—remaining true to their calling in good and bad times because the music dwells in their soul permanently. Brazil, for instance, still sings in an Italian joint in Greenwich Village, Manhattan.

Her repertoire in the Solaire gig stuck to familiar stuff, the standards that she probably grew up listening to. The difference was, she had a quirky way of singing them that made the songs sound fresh and exciting.

She punctuated the spaces in between the verses in “You Make Me Feel So Young” with girlish squeaks—a jazz improvisation style that tickled our senses. “I feel alive when I’m onstage,” Brazil said in her spiel, adding that the song was unrehearsed.

We felt her exuberance right from the opening number, “’S Wonderful,” whose lyrics (“…marvelous that you should care for me…”) seemed uncannily addressed to each member of the audience. She may have looked frail in appearance, and her voice at times sounded like it would waver, but her sensitivity and soulful rendition of “What Are You Doing the Rest of Your Life?” and “Moon River” touched our core.

She was at her shining best in “Satin Doll,” her phrasing marked by a lilting energy that evoked the thrill of falling in love.

It appeared like she would go on and on, were it not for Merk’s signal for his family to join the matriarch onstage for a birthday song and blowing of the cake’s candle.

Earlier, Merk himself as guest performer was a joy to watch, his singing a reminder that his mom’s influence runs deep. “Isa lang naman ang sabi ko sa kanila,” Brazil told us. “Sing from the heart.”

Solaire’s Eclipse bar, by the way, might be more interesting if management would book a jazz act once in a while.

Over at Strumm’s on Jupiter, Makati City, the jazz band Kiss the Bride launched its second album, “Subway,” with a live performance of the tracks in the record.

Aside from its songs being all originals, what made Kiss the Bride stand out was that its members looked like they really love what they were doing. The band’s leader and main composer, Tony Razon, has a day job as a flight steward, but his musical passion couldn’t be contained—thus his need to express himself through the album.

Guitarist Joey Puyat, likewise, lives a double life as head of an exclusive-membership resort by day and musician by night. He has two bands, in fact, the other one being the Blue Rats, whose co-founder, guitarist Andy Locsin (yes, him, the architect) was on hand to lend support to Puyat.

The rest of Kiss the Bride’s members—bassist Kingsley de los Santos, drummer Otep Concepcion, percussionist Uly Avante, second keyboardist Cecile Rodgers—proved themselves indispensable to the creation of the band’s elegant music. The genre is usually referred to as smooth jazz, or sometimes pogi jazz, but these are just terms that can be derogatory and wouldn’t quite capture the essence and subtle elements that fuel Kiss the Bride’s sound.

In a nutshell, what we heard that night was the energy of life itself, finding its way through songs inspired by Razon’s travels around the world.

Kiss the Bride plays once a month at Strumm’s, call tel. no. 8954636; for details about its “Subway” album, follow the band on facebook.com/kissthebridePH.