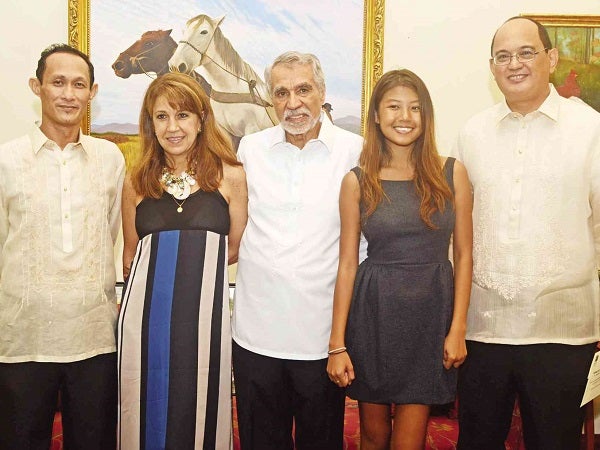 A second awarding ceremony for the winners of the Chilean embassy’s National Essay Photography Competition, with the theme Smiles for the World, was held Oct. 3 at the salon of Ambassador Roberto Mayorga’s residence at Forbes Park, Makati City.

“This is the definitive, more intimate awarding ceremony,” said Antonio Torralba in his introduction during a brief program. He was alluding to the bigger Sept. 18 affair at the Cultural Center of the Philippines (CCP) that erupted into a serious plagiarism issue.

Torralba, an associate professor at University of Asia & the Pacific, was one of the 12 on the jury that inadvertently gave the highest award to a photograph that turned out to have been stolen from the Internet by a 22-year-old graduate student.

In the ambassador’s residence, the prize was instead given to the first runner-up, a black-and-white entry by 55-year-old Bacolod businessman and photography hobbyist Medardo Marquez.

The affair was covered by the trimedia and attended by diplomats, media personalities and friends.

Ambassador Mayorga says this is the first and only competition of its kind in any country.

Now on its second year, it is a project of the embassy’s initiative Calidad Humana, which aims to highlight the positive characteristics of a particular people, avoid the negative aspects, to preserve and cultivate the humanness of the world.

“This is to disseminate the Filipino personality throughout the world,” says Mayorga. “We internationalize the project. Filipinos are different in their resiliency, constructive spirit—and friendship, of course. Filipinos in general give more concern for others than material things. They have more compassion. And the smile you have here is an internal smile, not just of the face. Take care of it.”

The photo competition was coordinated by the Chilean ambassador, a University of Santo Tomas representative, and Torralba. It was the effort of 22 corporate and university (UST, De La Salle University, Ateneo de Manila, University of the Philippines, UA&P) partners.

There were 350 entries. Twelve jurors (presidents of universities and corporations) selected 100, cut the number to 30, then reduced it to the Top 7.

“So as not to be technical about it,” explains Torralba, “because it is not necessarily a photo competition, it is not only the quality of the photography, but something that would showcase the Filipino qualities of cheerfulness, resiliency and compassion through the Filipino smile.”

The first-prize winner would receive $1,000 from the Chilean embassy; a high-end cell phone from Smart Communications; and a round-trip plane ticket to Chile and Brazil courtesy of Coca-Cola, for the winner to disseminate the Calidad Humana message.

The awarding ceremony was held at the CCP during the National Day of Chile.

The entry titled “The Mettle of the Filipino Spirit” grabbed the top prize. It is a striking image described as that of “a boy who helps his father in farming seaweeds along a coastal community in Zamboanga province.”

It was later revealed to be that of an urban kid in Brazil frolicking with friends in the water, titled “Neptune, King of the Sea,” and the image taken from the online photo-sharing site Flickr.

A complaint was sent by the photo’s owner, Gregory John Smith, a Norwegian national, social entrepreneur and founder of Children at Risk Foundation based in Brazil. Mayorga says Smith has asked if he could have the prize money.

“He can’t,” says the ambassador. “Because this is a competition for Filipinos. The photo must be taken by a Filipino, and, more than the photo, it is cultural. It is a message of invitation for a more compassionate world. But I invited him that abroad he could collaborate with us on the initiative.”

In the wake of the scandal, the culprit was barraged with brickbats in the social media. Said one: “Pasok ka na, boy! Naipasa mo ang training para maging politiko ng Pilipinas—a future senator of the Republic of the Philippines.”

Wicked, wicked—but that’s the shame he has to live down.

After the young man apologized to the photo’s owner and the Chilean embassy, Mayorga offered him the chance to redeem himself through Calidad Humana, by doing some community service in a depressed area of the metropolis.

“The essence of Calidad Humana is human compassion,” the ambassador said in his speech during the program. “Instead of punishing him, we will do our part to redeem him in a long process, wherein a change in his conduct will be evident.”

He marveled at the mysterious ways of God which could transform negative things into something positive.

“This incident is very special in the context of the Philippines today. It has brought about reactions from people who have called or written to us, encouraging us to move forward with force and faith. It is for these reasons that soon we will be announcing upcoming events of painting, music, literature, sports, with the goal to spread the values of this project.”

The third prize goes to “Don’t Worry, Be Happy: Of Lines and Smiles,” an image of four women of Banaue widely beaming, by freelance photojournalist and painter Arnold Jumpay, 46, from Capiz.

The second prize goes to “The Most Important Language: Smiles, Even Through Our Skin,” of a tattooed old Cordillera woman with a toothless smile, by freelance photographer Hannah Maria Reyes, 22, from Makati City.

Marquez’s piece, “We Are Blessed: Our Spirits Undaunted and Laughter Pure,” is the only one in black-and-white. It shows three laughing children the photographer says were nomadic barrio kids he found one time he was trekking on a hilly part of Binalbagan town in Negros Occidental, where his family has an hacienda.

“I’m really into outdoor photography,” he says. “I do mountain-climbing, hiking.”

For his winning entry, taken over 10 years ago, he used a Vietnam War-vintage, Japanese-issue Nikomat FT3 (cheaper version of Nikon), which he says he’s been using since 1985.

“I prefer black-and-white,” he says, “as you don’t get the distraction of color. There’s no ifs and buts about it; you know if it’s a good picture or a bad picture. You relish the challenge.”

Though he’s into the hauling business (petroleum), he also draws, dabbles in photography and writes essays, just to express himself. He still uses film and has his own darkroom.

“I just love to take photos,” he says. “I’ve not exhibited them. I just archive them. Ang importante lang is to document the moment, to express feelings.”

In his brief remark on receiving his award, Marquez showed a warm regard of humanity: “Calidad humana is a choice. In spite of what happened, its highest manifestation can be seen in magnanimity and forgiveness. By nature, man has honor and dignity.”