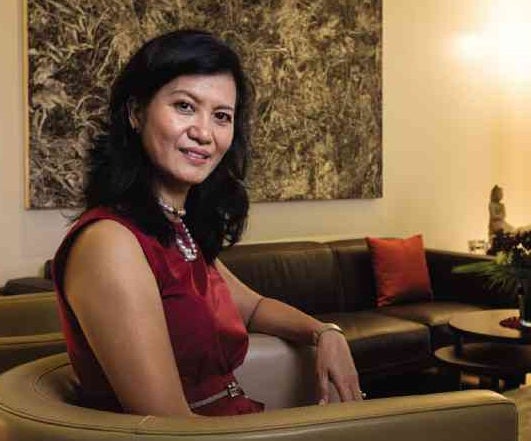 The diplomat’s wife returns to her roots

“Chäschüechli,” said the gracious Filipino hostess with a slight contraction on the throat, followed by an expulsion of breath.

She was offering a mini Swiss cheese quiche to a guest.

Madame Gracita Tolentino-Sieber, the Filipino wife of the Swiss ambassador, has adopted European ways. She speaks High German and works with Swiss efficiency, yet maintains an Asian gentleness.

For the coverage of the despedida for Margreta Klauser, wife of a popular Swiss hotelier, Madame Gracita sent us a detailed schedule of the interview, pictorial, the luncheon menu and the protocol.

Then they gathered in the formal dining room for a Swiss meal, catered by Chesa Bianca.

In entertaining, Madame Gracita always plays up the red and white, the colors of the Swiss flag. The nationalistic hostess wore a chic red dress. Red and white mums were arranged in clear vases and red birds of paradise sprang from a white vase.

The guests whetted their appetites with a carpaccio of Norwegian salmon, topped with  tarty lemon-mustard dressing,  with mushroom salad, rocket caperberries and Sbrinz cheese on the side.

Every week, the Siebers receive guests in their home.

Built in the ’60s by artist Betsy Westendorp, the Swiss residence was furnished with contemporary furniture and art. The Siebers added their personal effects such as a Chinese apothecary cabinet and a Chinese wedding chest from their Bangkok posting, sculptures from Africa and some paintings.

As an homage to Westendorp, her abstraction is displayed in the formal dining room.

The bungalow is surrounded by a lush tropical landscape,  planted with over 20 towering coconut trees all over the property. Sometimes the gardener would climb up and harvest the coconuts for the family’s buko juice.

Their daughters Katrin, 19, and Nina, 17, are studying in Switzerland.

“We are empty nesters,” she said with a sigh.

During meals, the conversations on current events and embassy matters would always end up with family: “Have you heard from the girls?” they would ask each other.

After living in the West for 30 years, Madame Gracita was glad to return to her roots.

After graduating from St. Joseph’s College with a degree in Business Administration, she went to New York in 1980 to work in the United Nations Development Program (UNDP).

The job entailed organizing conferences, assisting the bureau chief and doing administrative work. The job prepared her for a diplomat’s lifestyle, since the work exposed her to the international community.

While overseeing a conference in Geneva, she met her future husband, then a member of the Swiss delegation that was poised to go to New York.

Eventually, their paths crossed again when Sieber was a young diplomat in the Swiss mission to the United Nations.

They were married in New York in 1992. In 1994, Sieber was posted in Bangkok, with his wife and infant daughter.

Without any formal training on how to be a diplomat’s wife, Madame Gracita accepted the challenges.

Once she was asked to co-host an official dinner with the then Swiss ambassador, whose wife was not around. Sieber was then second in command as deputy chief of mission in Thailand.

Sitting at the end of the table, she was tasked to look after the guests on her side. When the first course arrived, she continued to converse with the visitors.

“It may seem trivial, but not for people who know about protocol. Now, as soon as my plate arrives, I pick up my silverware,” she said.

Returning to Switzerland, the family lived in Sieber’s hometown, Zurich, while he commuted to the foreign ministry in Bern.

Although Madame Gracita missed having a career, she enjoyed being a homemaker and mother. “I would not trade the opportunity of raising my kids,” she said.

“I love the orderliness and efficiency of the Swiss,” she pointed out. “Without helpers, it was still easy to do things yourself because the infrastructure was set up nicely. There was no need to drive because of the public transportation. Everything was nearby. When my daughter Katrin was in kindergarten, I taught her how to walk home from school to the apartment.”

In London, Madame Gracita would help in the embassy’s charity programs, such as feeding the homeless in a Swiss church.

In Stockholm, the local and expatriate community looked forward to the annual “Tastes of the World,” a fundraising event where embassies served their national cuisine.

“You meet interesting people, be it a member of a royal family, to the local staff in the embassy. They are proud to be working there. It’s been a gift to live in a country for three to four years and learn about its culture,” she said.

Arriving in Manila in 2010, Madame Gracita was reunited with her mother Leonora. At 86, her mother teaches her friends how to line-dance, and joins Bible studies.

Of all the postings, Manila has been a whirl with its vibrant social scene coupled with embassy-hosted affairs. The embassy  social calendar is filled with events for the Philippine Business Council, the Swiss Business Club and the Swiss National Day.

Madame Gracita co-hosts dinners when the guests bring their spouses.

At home she injects Filipino flavor into a typically Swiss meal. “We tweak a local dish such as the chicken tinola, a favorite of non-Filipino guests. The chicken breast and papaya are cut into cubes, and the dahon ng sili floats on top of the clear broth. The warm ginger flavor makes it comfort food,” she said.

Lumpia is a reliable dish, as with suman, or sticky rice cake, with coco jam. She has experimented with a plated version of kaldereta.

Steaks are a favorite main course. She explained that the Swiss use lots of sauces in the main course. For dessert, she would serve crème brûlée topped with ripe mango.

Still, the cuisine focuses on the Swiss culture, thus the sausages, roesti or fried grated potato pancake, and raclette or melted cheese.

A group she’s involved in is the Spouses of Heads of Mission (SHOM), which has been active with its charities and visits to cultural destinations.

Asked what has been her learning experiences as a diplomatic wife, Madame Gracita said she has acquired patience. “Patience helps you understand people better, especially when expectations are not met. It helps you to keep an open mind, to understand and not get upset.”