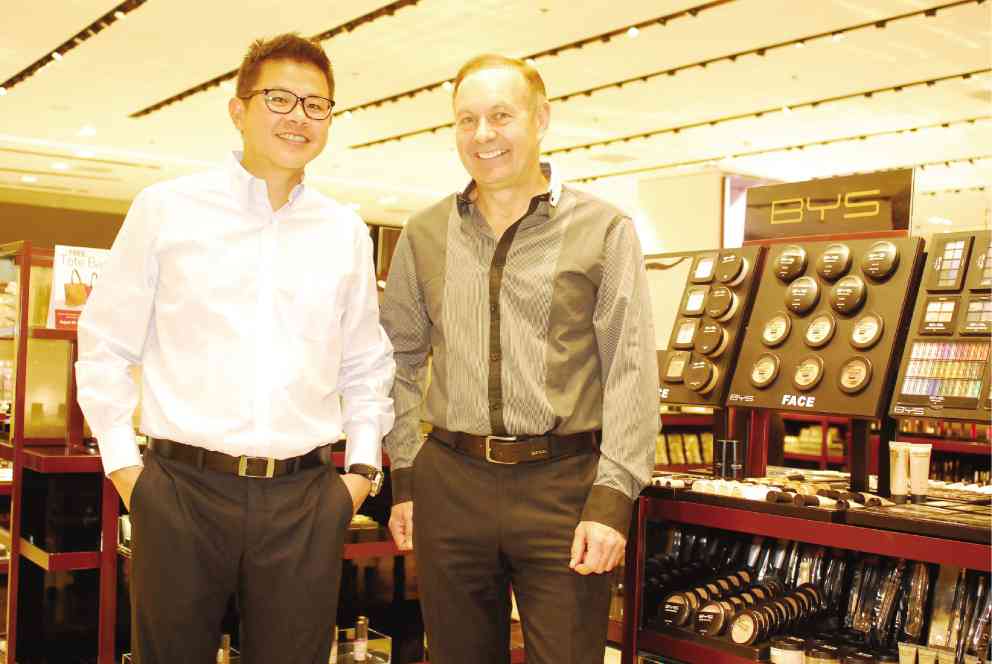 Cosmetics trend: ‘We think the provinces are starved for new shades’

Ed Aitken sees cosmetics the same way he sees fashion accessories: they should be trend-driven, and provide value for money.

The managing director of Melbourne-based cosmetics brand BYS said that when his company decided to launch its own makeup line nine years ago, they wanted to use their background in fashion as their point of difference in Australia. That means a continuous roll-out of seasonal colors and trendy products.

Aitken has been in the fashion-accessories distribution trade for the last 30-odd years.

BYS has been in the Philippines for barely a year, and is now being sold in 50 SM stores and Watsons branches. Apart from the vast range of makeup and nail colors, a big draw, it seems, has been the price point: it’s considerably lower than global mass-market brands.

Aitken and Goyena’s brother, Tony Chua, president and chief executive of iFace, have been doing business together for 12 years. Chua sources fashion accessories in China for clients, including Aitken. When BYS began expanding its distribution overseas four years ago, Chua saw a good opportunity.

“Our primary market is the 16 to 35-year-olds,” said Aitken. “But our range is so wide that we have something for all ages.”

To introduce the brand in the country, their tack has been to encourage people to try the product, since their claim is that BYS makeup is “exactly like [brands like] MAC in terms of shade and quality but priced at 30 percent its value.”

“Filipinos are smart shoppers,” Goyena said. “They want to find the best value for money, even with all the brands available to them. Once they try BYS and they see the price, they buy. It has been a challenge but we’re doing quite well.”

Another come-on, especially for upselling, has been BYS’ year-round “gift with purchase” promo. Chua has linked his accessories business with BYS, offering in-season trend items (neon shades, bling-bling earphones) as freebies for a minimum purchase of P500. All BYS products are priced below P1,000.

Goyena has also seen a growing interest in new colors for this traditionally conservative market.

“It’s no longer just the red lipstick or the nude shades. Our fastest-selling lipsticks are fuchsia, and also orange. When we opened in Isabela, we sold over 20 pieces of a lipstick called Halftime Orange on the first day. We think the provinces are starved for new shades.”

BYS is also becoming known for unusual product lines, like nail polish with sequins, beads or velvet finishes, and its lipstick range has six lines, from basic to the color-changing kind.

BYS packaging designs are done in Australia, but all the products are made in China. For concerns about safety, Aitken said that he has his own quality control team that checks the factories, and all items are tested in-house. BYS has a strict no-animal-testing policy.

“We market to European Union safety standards like France, and the United Kingdom,” he said. “I feel that Japan and the EU have the highest standards, and we are selling to these markets.”

Aitken added he works only with factories that have GMP (good manufacturing practice) certification.