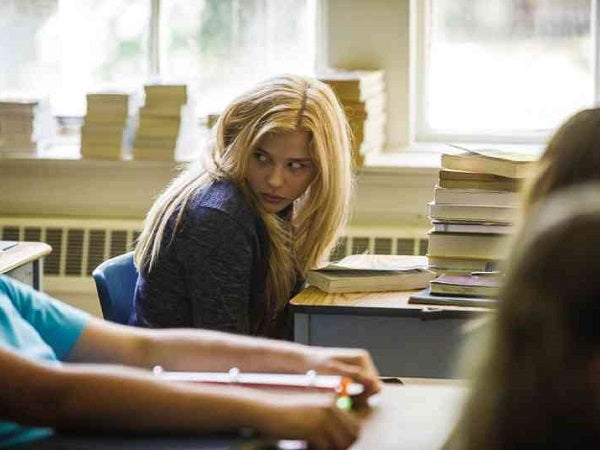 From Hit-Girl to Carrie

Chloey Grace Moretz, who played the vigilante Hit-Girl in the superhero spoof “Kick-Ass,” returns to the screen to play another sort of superhero—with telekinetic powers!—in the film remake of the Stephen King debut novel, “Carrie.” She talks about her character in the movie, cyber-bullying and that iconic prom scene:

How do you see Carrie?

I see her as a young woman who is loved too much by her mother—to the point that she isn’t allowed to experience life in the way she wants. That relationship, while a source of safety, is the cause of Carrie’s internal struggle. Her rebellion against her mother and her new experiences with people around her cause a detrimental outcome. But by gaining control she also loses control.

Did you watch the original 1976 movie?

Even though I know what Brian De Palma and Sissy Spacek did was phenomenal, I didn’t want to watch the original movie because I wanted to make Carrie my own.

How would you compare Stephen King’s book to this movie?

I feel that in the book Carrie is mad at everything, whereas in our film she is more sympathetic with the people who hate her. That is, until the very end… Otherwise I feel the film is a true depiction of King’s novel.

Do you sympathize with her?

Yes, because, like Carrie, I’m also a teenager trying to navigate some of the same things she’s experiencing. I am also trying to figure out my relationships and who I am as a girl—which includes what my voice, motivation and drive are. So the topics of the film are fresh in my mind and relevant to my life, which made it easier for me to tap into the character.

Julianne is like the pinnacle of this movie! Working with her was probably one of the most special experiences I have ever had as an actor. I don’t think Carrie would be the same without her because she brought something to Margaret you never would have imagined. You almost feel bad for that character, which is a new twist. Then there is a level of maternal aspect in her performance that I believe comes from the experience of having her own kids.

You have some very intense scenes with her.

Yes, and the funny thing is that right after shooting a dramatic scene with Julianne, I asked her what she was thinking and she answered, “I am thinking about what wallpaper I should put in my kids’ rooms…” She’s a genius!

How important was it to have a director like Kimberly Peirce on board?

It’s interesting to see this movie told through the eyes of a woman. I feel that it’s more realistic than if you had a man trying to figure out what it would be like to have your period and to be coming of age as a woman.  So, it was great to work with Kim because I was able to relate to her, and we really got into this movie in a very organic way.

The original film was mainly depicted as a horror movie. How do you see this new “Carrie”?

This movie isn’t just a horror movie. It takes on a lot of other elements that are very dark and heavy; but, at the same time, it has a soft, sweet and even romantic side.

Social media and even cyber-bullying have a presence in the movie.

It wouldn’t be an accurate description of modern teenagers and current times without social media being prevalent in all areas of life as well as cyber-bullying, because unfortunately that’s part of the negative aspect of social media. The film isn’t a social commentary on either, but they contribute to the story and to what ultimately happens with Carrie.

What did you feel when you first read this script?

I couldn’t put it down and just fell in love with Carrie and wanted to play her. Is she a tragic hero? Is she evil? Is she misguided and misunderstood? I was very excited to bring Carrie to life.

I love it when people tell me I can’t do something because that motivates me to try to do it better than they could ever have imagined. In a way that’s why I relate to Carrie so much, because so many people told her, “No!” That’s how this business is—you get told, “No!” 100 times, and then you just push it as far as you can until you get told, “Yes!”—which is when it becomes the biggest accomplishment.

One of the most dramatic and iconic moments of the movie is the prom scene. What was it like to shoot that scene?

I had five gallons of this blood-like substance coming down on me! It was actually pretty heavy because it was dropped from five feet above me. It was so worth it though because the end result is insane!

“Carrie” is now in cinemas across the Philippines. It is distributed by Columbia Pictures, the local office of Sony Pictures Releasing International.