How Nanding Josef became rich–but not of the material kind | Lifestyle.INQ ❮ ❯ 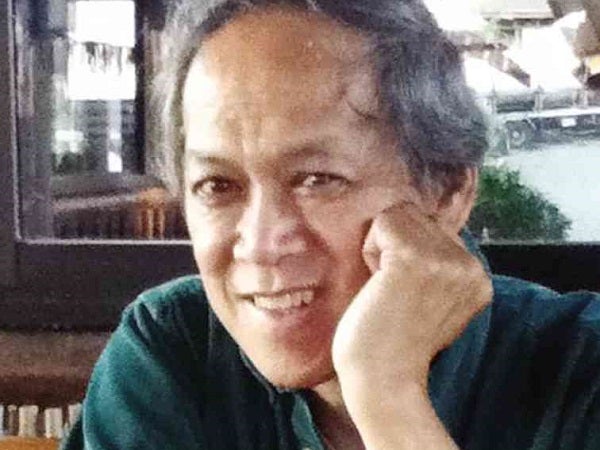 The veteran actor-teacher, who taught Zoology and dreamed of becoming a doctor before the theater bug bit him

How Nanding Josef became rich–but not of the material kind

By his own reckoning, actor Fernando “Nanding” Josef—now artistic director of Tanghalang Pilipino—has spent 40 years in theater. This, he said, is instrumental in his getting the kind of unique education he would never have learned in the classroom.

Josef’s formative years were at the Philippine Educational Theater Association (Peta). He got in when he auditioned for its laboratory productions during the time of now National Artist for Film Lino Brocka and Cecile Guidote Alvarez. His first director was Jojo Purisima, now based in Europe.

Recalled the actor: “I was already teaching Zoology at that time, having graduated with a bachelor’s degree in Zoology from UP Diliman. I took it up because I was told the subject could be of use when I moved to Medicine. I wanted to become a doctor only because I wanted to improve the family finances.”

At the time, he had no idea what acting was all about. He thought that actors were filthy rich and that, if he became one, he could help his family. Josef said he came from a very poor family of farmers, fisherfolk and shoemakers in Marikina. Becoming famous was not even in his mind. He just wanted a way out of penury.

But soon, his interest in Medicine waned, and he was stuck to being a Zoology instructor earning P4,000 a year.

In the Peta of the 1970s, he found himself in the company of some of the country’s best theater artists such as Lily Gamboa (now Boyles), CB Garrucho, Joy Soler, Soxy Topacio, Maryo delos Reyes, Gardy Labad, Frank Rivera and Nonon Padilla, among others.

His initial theater roles resonated well with him and his family background: a poor factory worker who ends up leading a union; a simple teacher fighting for just compensation; an oppressed student advocating quality education; a community leader marching for justice; and so on.

“At the time, we were paid P50 for a play that had three to four months of rehearsals and performances. Indeed, I was very poor and my theater income probably worsened my financial status,” he said, chuckling.

In between rehearsals and performances, Josef also worked as a property and costume master, stage manager, house manager, janitor and household help, and writer of press releases which he personally delivered to different publications at the time.

He was also a part-time barker: “I did the announcements at the PA system in Fort Santiago that our plays were about to start, and I would urge promenaders, including lovers, to get inside the theater even for free.”

Josef eventually quit his teaching job to become, instead, an acting mentor, conducting workshops not just in Metro Manila but also in remote areas of the country. Through these Peta outreach activities, he met a diverse range of people, from informal settlers to political exiles based in Europe.

His most memorable role would come with the life story of Macliing Dulag, the martyred Cordillera tribal leader who opposed the Chico River Dam.

“I believe that was a role that was a turning point in my life as an artist and as a cultural worker,” said Josef. “As a kid, I grew up very scared of Igorots because my parents told me Igorot beggars went around our little barrio, and would take me away and hurt me.”

To fully immerse Josef in the role, Peta sent him to Lubuagan, Kalinga, to live with the Kalingas for a couple of weeks.

“I lived with the family of Cirilo Bawer, a community leader and peace-pact holder. That short period of living with Cirilo’s family and interacting with the Kalingas—the elders, the weavers, the chanters, the farmers, the children—was totally life-changing. I became a different person and was a new Filipino citizen. That was like a culmination of my training as a Peta actor-teacher-organizer-researcher.

“Cirilo taught me everything about Macliing Dulag and his heroic attempt to save the ancestral land of the Ifugaos and the rest of the Cordilleras. He taught me how to play the flute, the gangsa, their dances. He and his nephew brought me to the top of the rice terraces overlooking the Chico River, which the Marcos administration, the military and their business partners wanted to turn into a dam that would provide electricity to many Luzon communities. But in the process, it would wipe out the cultural heritage of the Cordillera community. At that moment, while I was standing on top of the rice terraces, I could not hold back my tears. I was so furious inside. And I felt the strongest feeling of commitment to doing something for our country and for our people, to begin the fight for what is just, for what is right. I went back to Manila a changed man.”

His acclaimed turn as Macliing Dulag led to offers in film and television. He played an addict in “Tatlo, Dalawa, Isa.” He was Nora Aunor’s suitor in Brocka’s “Bona”; a convict in Joel Lamangan’s “Death Row”; Jose Rizal’s brother in Marilou Diaz-Abaya’s “Jose Rizal”; and, most recently, Robin Padilla’s father in “Guns and Roses.”

“I remember Bennewitz fondly for checking my big ego whenever I started acting like I was all out to impress the audience and the director. And from dear friend Brenda Fajardo—the Lucy Brown in my theater career—I learned to aim for the highest standards of excellence, but to keep my feet on the ground,” said Josef.

“Come to think of it, I never got rich,” he pointed out. “But I became who I am now—rich in knowledge about what it is to be Filipino, rich in human experiences as an artist and as a cultural worker.”