The world athletics championships originally scheduled for next year in Eugene, Oregon, will take place July 15-24 in 2022, avoiding a potential clash… 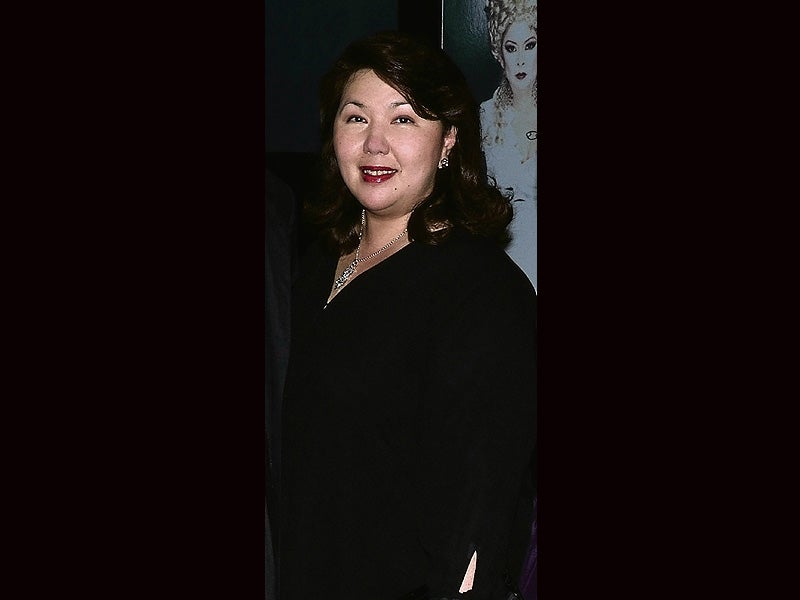 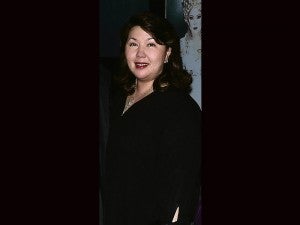 “I’m the little witch who sits back and says, ‘Just a minute!  You can do it just as well without much expenditure. It’s more challenging to come up with a good product without breaking the bank,’” says Irene Martel Francisco, on her job as managing director of Philippine Tatler.

Coincidentally, she is dressed in an all-black outfit.

Self-deprecating humor aside, Francisco—IMF to her staffers—benevolently augments the annual fundraising with a check from Tatler. Likewise, when the magazine started in 2001, she gave the business a little help from her own pocket.

“It’s part of brand-building, but the return is manifold,” she says.

The fruit of her good wishes and the teamwork is evident in the magazine’s 10th anniversary issue, its thickest ever—some 400 pages, with its bounty of blue-chip advertisers and a supplement. Among the Asian Tatlers, the Philippine Tatler is the first to launch a tablet application which allows the entire magazine to be downloaded for free.

The Philippine Tatler has come to represent prestige and achievement, creating a brand and a business around a clearly defined world of high society and glamour. Today, the elite sphere has widened to embrace influential decision-makers, entrepreneurs, style arbiters, humanitarians, artists, eco-activists and eye candy (as in foreign hunks with sculpted bodies and square jaws escorting around society babes). Readers are looking at who really matters in various fields.

The reporting goes beyond the trappings of the privileged, such as collecting vintage airplanes or grand dames Mely Hechanova and Amparito Lhuillier’s 100-sq-m closets (the size of a three-bedroom condo). It has tackled hedge funds, emerging investment opportunities and economic issues with a forum of experts. 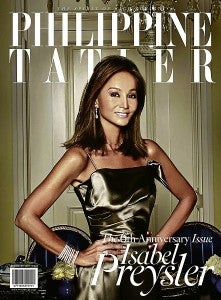 “We’re not just a society magazine. We’re a lifestyle magazine. The content is extremely varied. The mix is 30-40 percent regional, while 60-70 percent come from here. We try not put too much fashion. We have a good mix—art, wine, gadgets, business, finance and cars. The male readership of Tatler is getting stronger. We never position Tatler as just for women.  The age group ranges from 25 to mature,” explains Francisco.

Since Tatler’s inception, other upscale magazine titles have cropped up. Francisco says: “We don’t claim to be No. 1. We let the product speak for itself. If somebody else claims, they’re No.1, I’m not going to contest that.”

Nonetheless, Barry Goodridge, chairman and CEO of Asian Tatler Group, says: “The Philippine Tatler exemplifies the very best of the Tatler family of magazines. The team in Manila is consistently pushing the envelope with progressive visuals and is certainly not afraid to try the untested.”

The magazine has had its scoops that have been picked up by the foreign press. On its first anniversary cover, then President Arroyo and her Cabinet donned Ray-ban shades, parodying the “Men in Black” movie ad. Wig Tysmans’ photo landed not only in Inquirer’s front page, but was also talked about by CNN, BBC and international publications. Columnists debated if it was appropriate for the President to appear in a spoof.

A Russian magazine also asked for the rights to the story and photos, taken by Raymund Isaac, of fashion icon Isabel Preysler and had it translated in Russian.

Defying the regional Tatler’s prim covers of taipans and socialites, editor-in-chief Anton San Diego also used an unknown half-naked model posing in front of a background of artsy color washes. It was a collaboration with photographer Nigel Barker. The cover was printed in a Newsweek article on how luxury magazines were flourishing in Asia despite the recession. 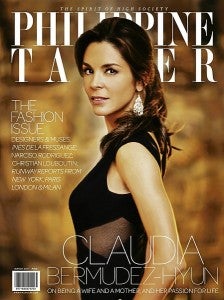 Last year, San Diego, editor-at-large Mia Borromeo and photographer Frank Hoefsmit flew to Italy to get an exclusive interview with the Ferragamo scions—James, Salvatore and Diego di San Guilani in their vineyard estates. The articles were reprinted in the HK, Singapore, Malaysia and China editions, and were also purchased by a Korean magazine. Many of the home stories have been also been reprinted regionally.

“You’re not going to have a hard time convincing extremely busy people to grant an interview because the reach is not limited to the Philippines. The reach is all over Asia,” says Francisco.

It wasn’t all hunky-dory at the start. Cynics said the Tatler formula was puffball, and the staffers knocked on doors for appointments. To strengthen the business, San Diego invited Francisco to partner with the original publisher, the late Eduardo Almario. A few issues later, she bought out Almario, whose health was declining.

With Francisco’s astute business sense, the Philippine Tatler has traipsed through good and not-so-good times.

“It was a matter of managing resources. We didn’t do too many lavish shoots even in the early days. It looked like we did a lot, but at carefully controlled costs. I would make the projections,” recalls Francisco.

She credits the Philippine team for its success. “The sales, management and editorial went beyond expectations to make sure the magazine had a firm footing.”  She adds that the Hong Kong headquarters always lends a hand when the magazine needs help.

San Diego has convinced subjects who rarely face the press, such as jet-setter Minnie Osmeña, ex-model Claudia Bermudez, Sen. Bongbong Marcos and his family, and heiress Liza Bayot, to grace the magazine. The cover story of tycoon Iñigo Zobel was also reprinted in Hong Kong. A provocative photo by Jun de Leon of former equestrian Denise Yabut-Cojuangco, looking younger and trimmer at 42, titillated the café society. Although San Diego tries to go over the edge, the stories have adhered to good, old-fashioned journalism, under the watchful eye of managing editor Chit Lijauco. 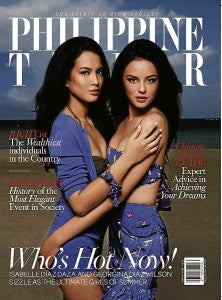 “There’s no bashing. We used to have Grist to the Rumour Mill, but it became counterproductive. There will always be dissenting opinions about everything, but there’s no reason to talk negative about others,” says Francisco. “Ultimately, Tatler is a magazine that celebrates the good life, which means being considerate of others and behaving in a manner that respects their sensibilities.”

From the beginning, Francisco had also wanted to do some good. She recalls that the agreement with her partner, the Hong Kong-based Asia Tatler, required an annual black-tie ball.

But, “I didn’t want a frivolous affair,” she recalls. Francisco proposed to turn the Tatler Ball into a charity event, which was unprecedented in the magazine’s history. For its first ball in 2002 at the Makati Shangri-La, the Philippine Tatler raised P300,000 for the beneficiary, Bantay Kalikasan. Last year, the Tatler Ball raised its biggest to date, P5.5 million, for the Child Protection Network where Francisco is also a director.

“We never ask you to address the check in Tatler’s name. It’s given straight to the foundation so none of the expenses that are part of the ball will be taken from the donation,” maintains Francisco. “Tatler matches the donation. We give around a million every year. It’s in the budget.”

Francisco has set broader aspirations by launching sister publications. The Philippine Tatler Homes, which features chic residences in the Philippines and abroad, will come out twice a year. The Philippines’ Best Restaurants guide now has a philanthropic venture.

“The greatest achievement is that Tatler is not just a magazine that talks about the Filipino lifestyle or things that happen to a certain segment of society. We used the influence of the magazine and channeled that into helping others. Last year, we started with Charity Week through the Philippines Best Restaurants. For nine days, participating restaurants will give a percentage of their sales to charity,” she says.

The first foray in 2010 raked in P800,000, the proceeds of which went to Hands-On Manila. This year, 40 restaurants are joining the Charity Week from Sept. 22-30. The Virlanie Foundation is this year’s beneficiary. 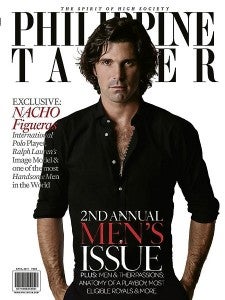 As in most publications, the revenues come from advertising rather than circulation. “I’ve been told by my partners to be very generous with the copies. They have to be seen by the right market.”

The number of advertising pages, mostly luxury products, reveal that the magazine is thriving. Francisco credits its success to balance. Her biggest learning curve has been to constantly harmonize the creative and business aspects.

“It’s having everyone understand why this has to be this way or why it can’t be done that way, and still come up with a good issue,” she explains. “When they want to do a project, we find the budget within reason. Usually, we are able to come up with what is needed for a quality product.”

During the global economic meltdown, budgets were slashed to enable the magazine to survive the tough times.

“There tends to be laxity on unnecessary things. Like most companies, we trimmed the fat. By end of 2009, things got better, but there was no need to loosen up. We operate as a leaner machine so that when something else happens, we’re better prepared,” she says.

The check-and-balance has kept Philippine Tatler competitive. Francisco adds: “Our readers, advertisers and business partners trust us because their goods and services are brought to the right market, and in the most elegant and yet relevant way. This comes from constantly reinventing ourselves and yet staying true to who we are.”