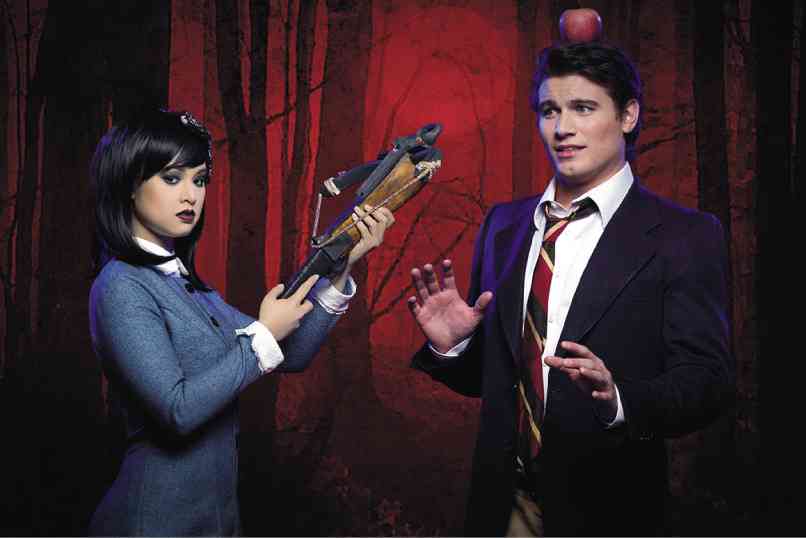 The theater community, practitioners and audiences alike, have been abuzz about an actress who learned a lead role in six days.

When Mikkie Bradshaw fell ill after the Friday opening night of Atlantis Productions’ recent staging of “Carrie,” a musical based on Stephen King’s novel, K-La Rivera was approached to step into the titular role.

Atlantis called her the following Saturday morning, asking her to come in to learn the songs, dialogue and blocking so she could open the show the following Friday.

“I was going to school, it was our finals week,” recalls the actress who’s currently taking up Communications at Miriam College.

“My heart just dropped. I had just watched Mikkie the night before. I was so happy for her when she got the role because I knew she really wanted it. I was devastated for her. I knew how important the role and the show were for her,” Rivera says. “I didn’t know if I could do it. I informed my professors and went in to rehearse. On the way, I cried and I was freaking out. I asked myself, ‘Can I do this?’”

Unlike if she were to learn a role from a long-running, popular musical where some of the songs might have been familiar, Rivera didn’t know any of the songs from the musical save for one, which she sang when she auditioned for “Carrie.”

Except that it was for another character.

“When I arrived at the studio, the staff was already there to teach me the songs,” she says. “Mikkie had been preparing for the role for almost a year because she was cast since last year. I couldn’t imagine how I could learn the role in just six days.”

But it happened. Saturday was spent learning 13 songs. She learned the blocking for Act 1 on Sunday, Act 2 on Monday (she had “dropped script” by then, meaning she had her lines memorized and no longer held a script while rehearsing).

A run-through of Act 1 was done on Tuesday, Act 2 on Wednesday. Thursday was for a run-through of the entire musical. The first time she rehearsed with the band was on Friday afternoon, just hours before her opening show.

She opened that night—to acclaim from audiences and reviewers alike. (Bradshaw recovered and returned for the production’s last weekend and alternated with Rivera for the remaining shows. Rivera was called up on stage at the last show’s curtain call, where she sang a duet with Bradshaw and shared a bow.)

“It was unreal. I couldn’t have done it without the entire cast and crew. They were very supportive. They never once pressured me,” she says.

During rehearsals, to get Rivera up to speed on where onstage she was supposed to be, the cast employed what theater folk endearingly call the “push-and-pull” method of blocking, where they literally pushed and pulled an actor to guide her along.

“It helped that Carrie was bullied a lot, so it was OK that I was being pushed around,” Rivera says, chuckling.

“She kept telling me not to worry and that, worse comes to worst, if I blank out on stage, she would just slap me!” she says, laughing.

Rivera’s past experiences were what built up the endurance and reserves that equipped her through the one-week preparation. She loved performing as a child. Born and raised in Canada, she constantly joined choirs, productions and pageants at a young age.

When she was 13, she landed a singing appearance in Las Vegas. With frequent trips back and forth to Manila, she was also approached by a Philippine record label for a contract.

“But I was too young then,” she says.

In 2009, Rivera relocated to Manila to establish a career. By 2011, her hard work started paying off. She was a finalist in ABS-CBN’s “Starpower,” a talent competition, and won MYX’s “VJ Search.” That same year, she had her professional stage debut as Nina Rosario in Atlantis’ “In the Heights.”

Last year, she played Princess Jasmine in Atlantis’ staging of “Disney’s Aladdin” opposite Tom Rodriguez as the titular character.

The bubbly, earnest Rivera is all humility when she shrugs off the “Carrie” feat. “I’m kind of crazy kasi e,” she says, laughing. “I just jump into things. Like when I moved from Canada to Manila, I just went ahead and did it. When I landed at the airport, it hit me that I was finally here on my own. With a lot of things in my life, I just go for it. Life is short! Never once in my life did I ever say to myself, ‘That’s impossible.’”

The craziness, this time, is appropriate as Rivera prepares for her new role as a somewhat off-kilter character: as Wednesday Addams in Atlantis’ staging of the musical “The Addams Family.”

Created by cartoonist Charles Addams, the Addams Family is a “ghoulish American family with an affinity for all things macabre.”

The original comic panels have inspired several television series, movies and even video games. A 1991 movie adaptation starred Cristina Ricci as Wednesday with Angelica Houston and Raul Julia as the family’s matriarch and patriarch, Morticia and Gomez.

The musical, which uses a new story line, debuted on Broadway in 2011 with book by Marshall Brickman and Rick Elice, and music and lyrics by Drama Desk-winning composer/lyricist Andrew Lippa. The local staging stars Arnell Ignacio and Eula Valdes as Gomez and Morticia Addams, respectively.

Rivera relishes the prospect of fleshing out a creepy character: “I love scary movies. And I love theater. It combines everything I enjoy doing: singing, dancing, acting. I love trying out new things and expanding my horizons.”