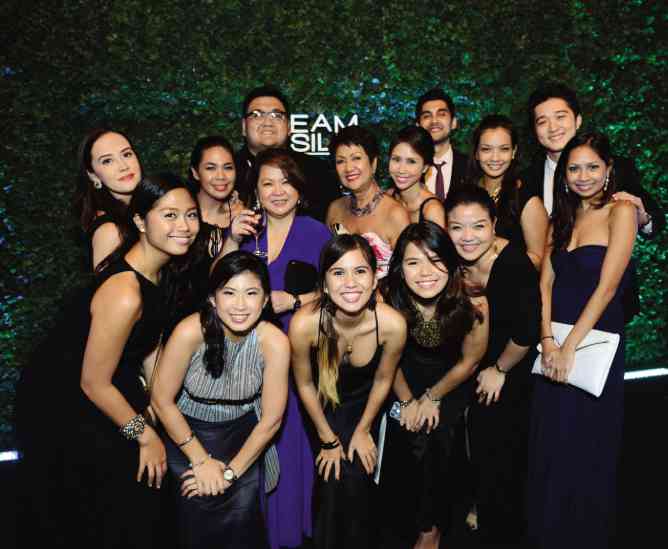 The happening was a mixed performance of dance, music and film led by the 42-piece ABS-CBN Philharmonic Orchestra under conductor Gerard Salonga. Included in the orchestra was the 10-member, all-female string quartet section using violin bows made of, take note, palangga, human hair!

“This year, Cream Silk stepped up to the challenge of promising its users 10 times stronger hair against hair fall, proving how hair washed with Cream Silk can give you hair so strong not only could it be seen, it could also be heard,” said Gina Lorenzana, Unilever VP for personal care.

For the event, the NBC Tent was tastefully transformed into a concert hall.

Gentleman for all seasons  Ralph Lim Joseph hosted a two-day Hawaiian-theme birthday bash at the Wine Museum Hotel & Resto in Pasay City. Family, friends and associates came to celebrate. After all, Ralph, president of Philippine Wine Merchants & Ralph’s Wines and Spirits, was turning 62!

Highlights included a Hawaiian luau dance number, a special video presentation of milestones of Ralph’s colorful life, a ceremonial candle blowing, and a toast of Marguet Champagne to kick off the night’s fun partying.

Invitees couldn’t get enough of the Stolichnaya Premium Vodka cocktails, Corona and Sapporo beers, and the high-end single malts by BenRiach.

In 2008, believing that early detection is a major step in the fight against breast cancer, and with October designated as Breast-Cancer Awareness Month, Peninsula Manila along with its sister hotels in Asia and the United States embarked on organizing monthlong pink-theme events to raise both awareness and funds for the relief of breast-cancer patients.

This year, Peninsula partnered with Estée Lauder Companies and Rustan’s to build a breast-cancer ward at the East Avenue Medical Center in Quezon City.

Estée Lauder itself has its own program initiated by the company’s late founder Evelyn Lauder 21 years ago, which tries to bring patients, their kin and friends together to take part in preventive measures, such as annual mammograms, healthy lifestyle changes and regular clinic visits.

An auction was held at the Peninsula’s Conservatory to raise funds for the Philippine Foundation for Breast Care Inc. Bids were accepted for a four day-three night stay at the Peninsula Hong Kong, which includes Rolls-Royce transfers and round-trip business class tickets via Cathay Pacific Airways; a weekend stay at a beachfront casita in Amanpulo; an overnight stay at the Peninsula Suite in Manila with a dinner for 10 guests; a limited-edition jar of La Mer crème; an Aranaz minaudière; a magnum of Moët & Chandon champagne; a sculpture by Benjamin Dailo from Rustan’s Department Store; and exclusive fragrances from Jo Malone, Tom Ford, Zegna and Bobbi Brown.

The party’s pink theme extended throughout the hotel, where nearly 200 of the Philippines’ top movers and shakers and most influential media practitioners were greeted upon arrival by pink-gloved pages lined along the lobby’s grand staircase.

Guests marveled at the lovely pink orchids and candles scattered all over the lobby and restaurants, as well as the especially designed ribbons worn by the hotel staff. They sipped on free-flowing Moët & Chandon Rosé Champagne, nibbling on signature pink-theme canapés and listening to live music provided by Baihana.