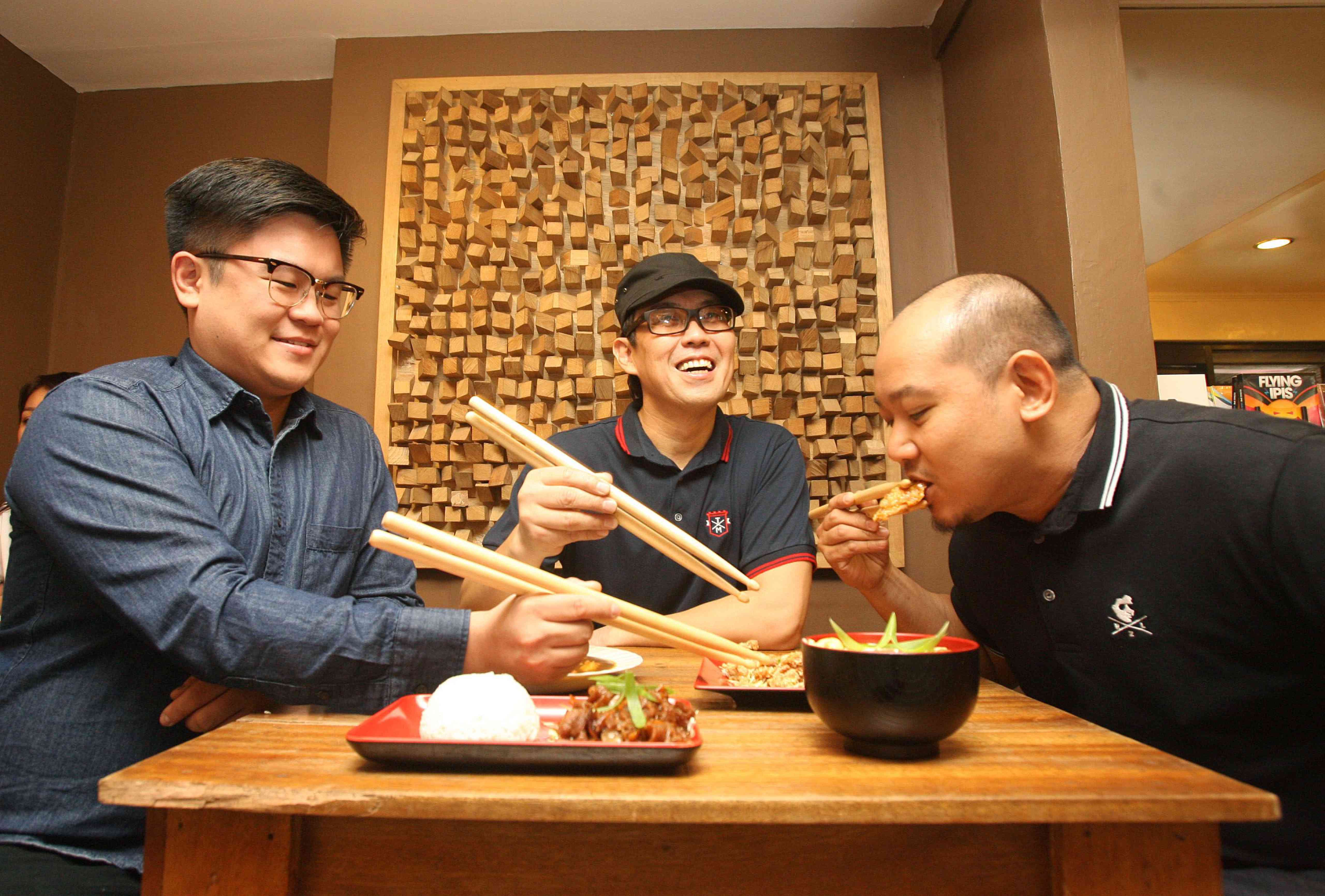 In the immortal words of James Brown, “Give the drummer some.”

Some more of that Q.P. mayonnaise, ’yo.

But seriously, the local foodie scene has been increasingly trend-driven of late, thanks to the pervasive influence of the blogosphere.

The latest food trend to hit the Metro has been the “katsu,” that uniquely Japanese take on the wiener schnitzel, a deep-fried breaded pork or chicken cutlet served with rice, tonkatsu sauce and a variety of trimmings.

In the last 12 months alone, at least six different katsu joints have opened throughout the city, ranging from the upmarket Yabu, whose offerings include katsu made with toothsome kurobuta pork, to the more middlebrow Katsu Café, with its studied post-modern ambience.

There are indications that the katsu wave has yet to crest: A number of new franchises from Japan—Ginza Bairin, Saboten—have joined the fray, each claiming to bring the authentic flavor of katsu to local palates.

(I’m just waiting for some punster to open his own joint and call it “Shintaro Katsu,” after that late Japanese actor. Hey, if it’s going to happen, it’ll happen in the Philippines.)

There is widespread debate among foodies as to who serves the best katsu in town—it’s subjective, no?—but everyone is more or less in agreement that the whole katsu craze began, appropriately enough, with Crazy Katsu.

Only a couple of side dishes were offered, the usual miso soup and gyoza (fried or steamed dumplings).

But Crazy Katsu hit all the right notes: The food was good, the portions hearty, and the prices modest. Best of all, they let you go to town with the Q.P. squeeze bottle. (I don’t know about you, but a free hand with the condiments is one of my essential criteria for choosing a restaurant.)

Within weeks, word of mouth spread, and the Kyusi cognoscenti were soon beating a path to Crazy Katsu’s doors. Within a year, another Crazy Katsu opened on Lilac St. in SSS Village, Marikina. After a few months, yet another branch opened down south, on Aguirre Ave. in BF Parañaque. Last summer, Crazy Katsu opened its fourth branch on Taft Ave., a stone’s throw away from De La Salle University.

Despite the emergence of numerous competing katsu restaurants in recent months, Crazy Katsu seems to have kept its loyal clientele. The Maginhawa branch has since expanded to three times its initial floor space to keep up with the demand.

It’s an amazing success story, especially considering that the Crazy Katsu formula was invented not in some test kitchen, but in a recording studio. And that the people behind Crazy Katsu aren’t restaurateurs or chefs, but drummers.

(Ah, so. That explains the opening James Brown reference.)

Shinji is, of course, he after whom the second Pedicab album, “Shinji, Ilabas Mo Na Ang Helicopter” was named, the man at the mixing board of Sound Creation digital recording studio and recording engineer of choice for half the local indie rock scene, including Sandwich, Pedicab, Imago, Yeng Constantino and others too numerous to mention here.

Shinji first came to the Philippines in 1997, and decided to stay for good two years later. But back in Japan, he had been playing percussion since he was 12, first with his high school brass symphony, and later with a slew of bands.

“Playing in the brass band was a serious affair,” he says in excellent Tagalog (his wife is Filipina). “We always won band competitions, so we practiced for three hours every day.”

While in college in Tokyo, he worked after school in a restaurant, mainly for the free food.

After settling in in the Philippines, he built a modest digital recording studio in his Kyusi home, for his own use.

Somehow, the existence of the studio came to the attention of Mondo Castro, vocalist for the Pin-up Girls and an NU107 disc jockey, and Diego Mapa, then of Monsterbot. Both bands recorded their albums at the newly-dubbed Sound Creation studios, which by 1999 had become a commercial recording studio, with ex-Eraserhead Raimund Marasigan as producer, and Shinji as engineer.

“The bands would have food delivered while they were recording, the usual burgers and pizzas,” continues Shinji. “After a while, I got tired of burgers and pizza, so I would cook the kind of food I liked, the Japanese dishes that I grew up with. The musicians would see me eating home-cooked Japanese food, and ask ‘how come we’re eating burgers and you’re eating tonkatsu?’ They wanted some of that, so I decided to offer a limited menu at the studio for the musicians, so they wouldn’t have to go out to eat, and so they could have a taste of real Japanese food.

Eventually, musicians started to go to Sound Creation not just for the recording facilities, but also for the food.

At this point, Bryan takes up the story.

“I had been looking to start a business,” he recalls. “I used to have a pet store with my sister. But I didn’t have any background in the food business. I had a little retail experience because I used to work with a bag company.”

While Taken By Cars was recording at Sound Creation, Bryan discovered Shinji’s Japanese menu, and the kernel for the idea of Crazy Katsu was born.

“It all started happening very quickly,” he recalls. After shopping around for a location, they settled on the emerging foodie neighborhood in Diliman along Maginhawa St., mainly because it was close to Sound Creation. After a little brainstorming, they came up with a few names, among which Crazy Katsu soon became the obvious choice, especially after Raimund Marasigan (who had become Shinji’s compadre in the meantime) gave it his imprimatur.

“Raimund sort of ‘produced’ Crazy Katsu,” laughs Bryan and Shinji. A logo was quickly mocked up on Powerpoint and later tweaked by a graphic designer, corporate paperwork attended to, and soon enough, Crazy Katsu was off and running.

It was also at Raimund’s insistence that the second branch of Crazy Katsu opened in Marikina, near his neighborhood.

When the time came to open a branch in the south, Parañaque homeboy and Marasigan’s Sandwich bandmate Mike Dizon was the logical choice to partner with.

It all fell into place naturally.

With Gaijin on hiatus after their second album “Sunday Kodama,” Shinji is devoting more of his energies to running Crazy Katsu.

I ask the three drummers if their indie rock bona fides factor into Crazy Katsu’s success.

“Maybe in the beginning,” says Bryan. “But after a while, people just come because they like the food.” •