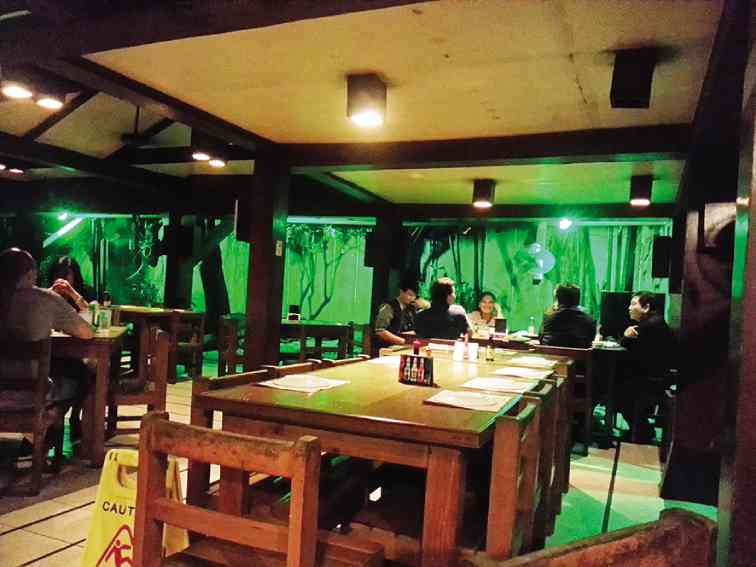 You could run into John Lloyd Cruz here

There was a time in the 1980s when going on a night-out could mean having cheap but ice-cold beer with friends in a hole-in-the-wall joint called Tib’s on Makati Avenue. Its nondescript ambiance would morph into the essence of cool when the likes of Miguel Faustmann and his cohorts at Repertory Philippines would drop in and chug their Pale Pilsens by the roadside, music blaring from the stage actor’s Volkswagen Brazilia.

These days there are places around town where one can still enjoy that casual, relaxed vibe without spending too much.

The P. Burgos area in Makati is too honky-tonky, but in one side street just off Kalayaan Avenue is El Chupacabra (5782 JVR Bldg., Felipe St.)—a Mexican-style cantina whose signboard trots out its offerings: “Cheap beer, BBQ, street tacos.”

The place, though not air-conditioned, attracts foreigners and locals who engage in animated talk while drinking their beers. The SMB Pale Pilsen (P45) goes well with the San Francisco-style lean pork sisig (P175).

On certain nights one may chance upon John Lloyd Cruz meeting up with ABS-CBN folks.

But what we love about El Chupacabra (Spanish for “goat sucker,” a mythical creature) is its canned music, which, on our first time to visit, consists of Pearl Jam, Jimi Hendrix, Savoy Brown, Led Zep and Electric Light Orchestra.

Metrowalk (Meralco Avenue, Pasig) is a cluster of restaurants and bars—a number of which showcase live music and comedy acts. In the middle of the complex is an open-air plaza where barkada types gulp beer by the bucket while watching the night’s featured band.

The night we check it out, a group called Music Network is playing covers of Angeline Quinto and Jessie J. As the vocalists sing, “Forget about the price tag,” we order Pale Pilsen. The beer’s price depends upon the establishment that one will get it from.

In our case, it’s from the club Aruba (SMB Pale or Light at P66), which also serves the tastiest gambas, beef salpicao and crispy tenga on that side of the Ortigas Center. Aruba’s pulutan may be a bit costly (averaging P250-P350), but it’s surely worth every bite especially when watching Milan perform on a Wednesday night.

The Araneta Center management has transformed the parking lot beside the Big Dome in Cubao into a gimik place, dubbed Flavors, where one can drink and dine while a band plays on a low stage beside the giant Christmas tree.

Jasmine Abubakar, head of operations of the Araneta-owned Rasa-Sachi restaurant, and shift manager Abbey Manalang say that Flavors offers a cheaper alternative for the Cubao weekend crowd this holiday season.

Flavors is open 5 p.m. to 3 a.m. Fridays, Saturdays and Sundays, but will operate every day after the lighting of the giant Christmas tree on Nov. 17.

At P40 per can of SMB Pale or Light to go with grilled squid, chicken and pork barbecue, among other food items, the Flavors fare is tempting enough to prefer over the expensive restaurants along Gateway row.

The area near President Aquino’s family residence looks too deserted to have a night crowd, but up on the penthouse of Times Square Building on Examiner Street, Quezon City, stands The Roof Deck Bistro—a restaurant that also presents live acoustic groups in the evening.

On a Friday we catch a trio composed of keyboardist Arvi Pagulayan, drummer Jumy David and singer Diday (a finalist of “The Voice”) playing covers of Etta James, Chaka Khan, Christina Perry and Maroon 5.

At the corner of Matalino Street and Kalayaan Avenue in Quezon City is Trellis—a restaurant that, after opening in the early ’80s, has become an institution for its pork sisig. The place has expanded in size and menu choices, which means it’s been doing good business all these years.

SMB Pale or Light is P40, while the famous sisig is P140. Look for Totoy, one of the most attentive waiters we’ve met recently.