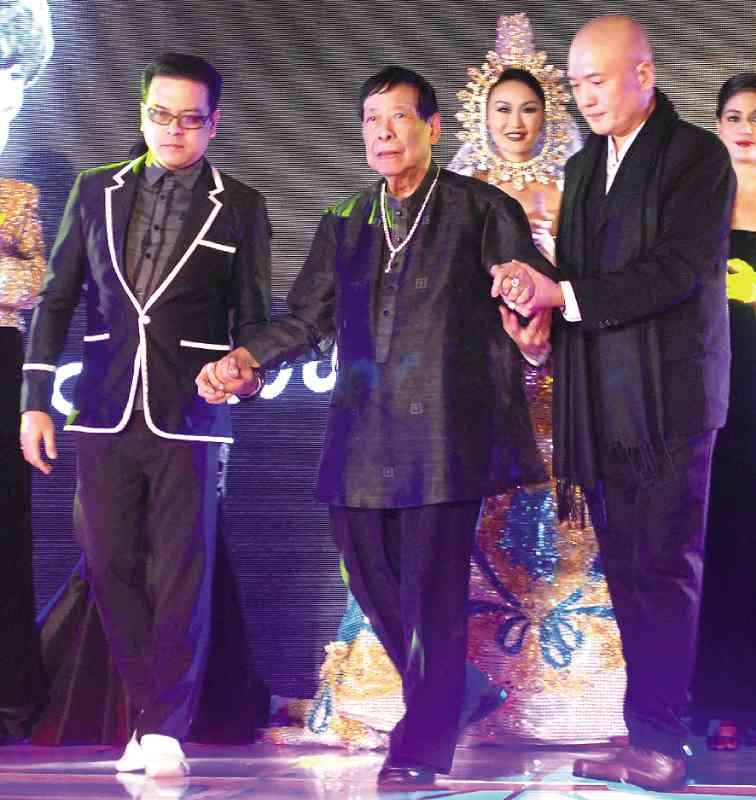 AUREO Alonzo, center, thanks his guests while asking for the Blessed Virgin Mary’s intercession.

Colleagues and loyal clients of Aureo Alonzo recently staged a fashion show in honor of the veteran designer. Dubbed as a “Toast to the Prince of Philippine Haute Couture,” the dinner show at the Hyatt Hotel’s grand ballroom doubled as a fundraiser to help pay for the designer’s medical bills.

Organizers led by Tente Wilwayco, Alonzo’s longtime friend and assistant designer, collaborated with theater director Veda Bañez Alonzo on the show. She and a number of other people, including singer Chinggoy Alonzo, rendered their services pro bono.

A contemporary of Pitoy Moreno and Ben Farrales, Alonzo, or “Tatang” to close friends, is known in the industry for his intricately beaded creations that evoke a bygone age of elegance. As a Marian devotee, Alonzo also loves to draw inspirations from religious imagery. Many of his loyal clients described his pieces as “timeless and classic.”

He also holds the distinction of being the only Filipino designer to win the Camel Award of International High Fashion in Italy.

Although afflicted with a number of age-related health problems, including regular trips to a dialysis clinic, the designer, 84, continues to receive clients in his Malate shop.

The main event was preceded by a series of mini fashion shows featuring the clothes of Wilwayco, Rey Lazaro, Pencil Diestra and Eric Saint. Like Wilwayco, 69, the three younger designers consider Alonzo as their mentor.

“Tatang is known for his fine workmanship,” said Wilwayco. “He’s also a perfectionist when it comes to fit. He wants to make the wearer feel that a gown was made specially for her, and look it.”

To this day, Alonzo still cuts his fabrics. In fact, Wilwayco considers him “more a couturier than a designer.”

“A designer could be just an illustrator or an ideas person,” he said. “But Tatang really knows how to execute his ideas. There’s a reason for paying him that much.”

“With a clear intent to awe his audience, his elements are large-scale, involving rich hues and three-dimensional embroidery profuse with glitter,” said Franco in a text message. “While Ben opted to exploit his materials’ fluid lines and ethnic derivations, and Pitoy employed structure on polished Castilian inspirations, Aureo conjured up images of historical royalty and pageantry.”

Cesar Gaupo, dubbed as the country’s “ready-to-wear king,” had the privilege of apprenticing with Alonzo early in his career.

“As a designer, he’s one of the most prolific masters of high fashion,” Gaupo said in an e-mail. “His style is always classic, elegant and very European. Apart from his love for beading, he thrives on drama.”

His manner of beading distinguishes Alonzo’s works from his contemporaries. The younger set may not know him anymore, but during his heyday, he was the go-to guy of countless brides and debutantes. He also dressed up high-society women and wives of politicians.

“One of the primary reasons his clients flocked to him was the attention he put into fitting and finishing,” said Gaupo. “He was also sweet, charming and very charismatic.”

Thanks to her grandmother and mother, businesswoman Burgos has known Alonzo since she was a kid.

“He has been making clothes for me since I was young,” she said. “Over the years, I’ve tried other designers like Inno Sotto and Cary Santiago, but I still have a good number of my clothes made by Tatang.”

Burgos appreciates the attention to detail Alonzo puts into his embellishments. Except for the designer’s more distinctive gowns, which she donates to museums after wearing them, most of his “timeless” pieces could be worn again.

“I also love his choice of colors,” said Burgos. “When it comes to fitting, I don’t have to come back repeatedly. Since he knows my body already, he can hide problem areas immediately.”

Like Burgos, Villar has been going to Alonzo with her mother since she was an impressionable girl. Despite being exposed to other designers later on, she still finds herself going back to

“Tatang is like a father to me,” she said. “His works are so elegant and fabulous. The fit is perfect and the price is worth it.”

Former party-list representative and civic leader Lokin has been going to Alonzo since 2001, choosing either him or Paul Cabral to make her gowns for the president’s annual state of the nation address, and for charity events.

“Apart from the beadwork, he has a way of incorporating classic touches like this cabbage rose,” she said of the embellishment on her apple green terno. “Provided I don’t gain weight, his terno and Maria Claras are staples in my wardrobe. I’m sure many young people don’t know him anymore, but like wine, he gets better with age.”

Alonzo also has broad appeal among all sorts of clients. Even a flamboyant dresser like Holmgren, who has no qualms about going “bra-less and backless,” appreciates Alonzo’s designs.

“His construction is very clean that you could almost wear his clothes inside out,” said Holmgren, who was wearing a two-decade-old spaghetti-strap gown by Alonzo.

“His designs also reflect your personality and the crowd you move in. And the best part is, they’re ageless. You can easily tweak the look with the right accessories.”