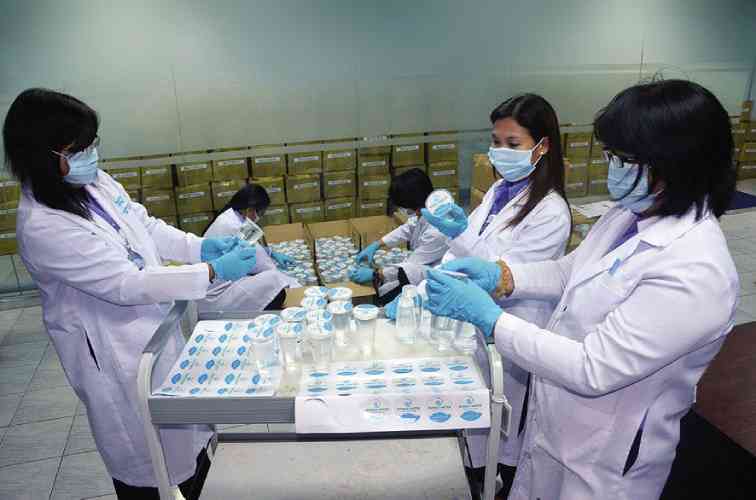 MANILA Water produces “BasoWater,” potable water in plastic cups, to be donated to Leyte and other affected areas.

Individual and corporate aid pledges show an unprecedented outpouring of relief for the victims of Typhoon “Yolanda.”

Fast Retailing Philippines Inc., the company behind Uniqlo, announced it’s giving P1 million in cash and P1 million worth of clothing to SM Foundation to be donated to the typhoon victims. (SM is Uniqlo’s local partner.)

At the launch of its Holiday 2013 collection this week, MAC Cosmetics, through brand manager Gay Lao, also announced a P1-million grant to Unicef from the local Viva Glam/MAC AIDS Fund.

consisting of service engineers and employees from various departments, will provide on-ground assistance for people in need.”

The SM Group has pledged P100 million as a calamity fund for Tacloban, Ormoc, Samar, Cebu, Iloilo, Capiz and Bicol.

The fund will be for rebuilding homes, community centers, schools and churches, and for immediate relief through food and supplies, according to a statement from SM.

Benefit Cosmetics also gave cash and pooled donations from its employees for the typhoon victims.

“We also have volunteers in relief operations to repack goods to be brought to Tacloban airport organized in the Philippine Army gym,” said Aubrey Bautista, Benefit’s brand manager.

Cebu Pacific also announced that it’s conducting humanitarian flights and distributing relief goods and assistance to some 200 employees in the affected areas.

The Ayala Group’s relief efforts include 25 free SMS per day for local and international messages until Nov. 17 for Globe and TM subscribers in Leyte, Samar, Cebu, Aklan, Antique and Capiz. It’s an initiative in coordination with other telcos.

The conglomerate also made an initial donation of P10 million to the Department of Social Welfare and Development, on top of monetary and in-kind pledges from its business partners such as Mitsubishi Corp. and Singapore Telecom.

Ayala Land, meanwhile, is focused on other badly hit areas. It sent medical doctors to Iloilo. (Iloilo and Cebu are its base of operations for Central and Eastern Visayas.)

“We are concentrating assistance efforts in the northern part of Iloilo where the devastation is just as severe as in other areas, but has not received national attention,” said Ayala Land president Tony Aquino.

“We will focus on rehabilitating the coastal towns of Carles and Estancia so that families in the dangerous elevations will be relocated to a safe area,” added Aquino.

“We will also be engaged in helping fishermen resume their livelihood by providing fishing gear that was lost.”

Ayala Aviation’s plane and choppers have been transporting personnel and relief goods from Manila and Cebu to Tacloban.

Ayala Foundation is also mobilizing employees of Ayala Land, BPI, Globe, Manila Water, Integrated Micro-Electronics and LiveIt as well as the public for donations in cash and in kind.

BPI, Ayala and Manila Water have opened up their headquarters to accept donations of clothes, towels, medicine, hygiene kits.

“Our job as a corporation is to get services that we’re responsible for back online and to account for all our employees,” said Ayala Corp. chair and CEO Jaime Augusto Zobel de Ayala. “All things considered, we had some of our operations and communications facilities up between 24 and 48 hours. That’s quite extraordinary. And the teams have been at work 24 hours a day, nonstop, trying to get things back up.”

Employees of Shopwise and Rustan’s Supermarket have volunteered to donate at least an hour of their salary to the affected areas. Some rank-and-file employees have even pledged a whole day’s salary, according to president Donnie Tantoco.

“We are also partnering with our suppliers to transform our 15th anniversary celebration for Shopwise into a fundraiser for the benefit of the victims of Yolanda,” Tantoco added.

Meanwhile, Stores Specialists Inc. executive vice president Anton Huang said their company is working with their business partners overseas to send relief packs to the victims through the PNRC.

“As a second stage, it is our intent, together with our entire corporate family, to assist in the rebuilding efforts through Gawad Kalinga and Habitat for Humanity,” Huang added.

Various groups and organizations are also doing their part. At the benefit dinner for the Sapatero Scholarship Fund of Marikina City this week, the eight featured designers each donated a pair of footwear to be auctioned online for the typhoon relief efforts.

Designer Brian Tenorio noted that Marikeños can empathize with the plight of the Yolanda victims, as their own city was one of, if not the worst hit by Typhoon “Ondoy” in 2009.

In Look Magazine’s Look of Style Awards 2013 Thursday night, each of the finalists—nine for apparel and 12 for accessories—donated one of their designs to be auctioned off, also for the disaster relief.

On Nov. 17, a group of fashion people is also offering a Mass at 5:30 p.m. at the Mary Mother of Hope Chapel at Landmark Makati. They will be accepting cash and check donations for the relief efforts.

Even top British model David Gandy, who was recently in the country on his unveiling as the spokesperson of SM Men’s fashion, called on people to do their share.

“The wonderful respectful nature of the Philippino (sic) people is what made the trip so special,” Gandy told Vogue.co.uk.

“This makes it all the sadder, when I see the news of the horrific typhoon that recently hit and the tens of thousands feared dead… If you would like to help, I cannot think of a better way than with donations to the following charity Shelterbox.org/donate.php.” With a report from Raoul J. Chee Kee