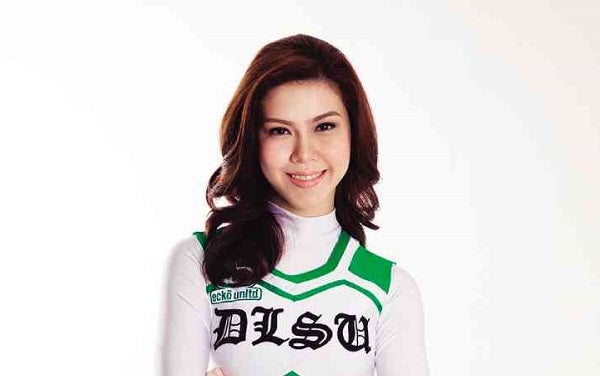 It is said that hard work beats talent—people who are truly dedicated to what they do end up better than those who are naturally gifted but don’t use their abilities.

This is especially true in sports. Some of the most famous athletes in the world—Michael Jordan, Stan Smith, Bethany Hamilton and Michael Oher, to name a few—weren’t born with exceptional skills. Yet they pushed themselves to excel and went on to achieve much.

Alex Lisbona, a member of the Animo Squad of De La Salle University, is a good cheerleader. But what makes her stand out from the rest is her awe-inspiring dedication. She puts her heart into everything she does.

More than three years ago, she knew almost nothing about cheerleading. She initially tried out for the DLSU team on a whim, seeing the opportunity as a way to overcome her shyness and boost her self-esteem.

Despite her having no previous cheerleading experience, she was accepted. “I thought it was a long shot that I would get in,” she said. “But surprisingly, I did.”

She went through a difficult period adjusting to the hectic schedule and the rigorous training. It was a challenge to balance her time between schoolwork, team practice, UAAP games and family. She then decided to give up her membership in other organizations to focus solely on cheerleading.

“I figured that it was best to do great with less things on my plate, than to have so much on it and not be able to do my best at everything,” she said.

Working hard to develop her cheerleading skills, she soon became on par with her more experienced teammates. She was then put on the competing lineup for the National Cheerleading Competition All-Girl Division.

In 2011 and 2012, her first two years with the DLSU Animo Squad, Alex contributed to the team’s runner-up finish.

It was also in 2012 when she underwent a crisis. A lump in her left breast had to be excised through surgery, only a month before the cheering competition. “It was tough coming back to cheer practice after recovering from the surgery since I had to regain my strength,” she admitted.

But she got back on her feet, ready to compete: “I didn’t want the team to have to adjust the routines, considering we worked so hard on it for three months.”

She exerted double efforts in her last year with the team. “Months before the [2013] competition, I kept telling myself that the third time’s the charm, and that no matter what the outcome, I’m going all out because this is my last,” she said.

Her efforts were not in vain, as the team finally bagged the championship this year. She could still vividly recall the excitement of winning: “I seriously get chills all over every time I think about it. It’s the best feeling ever! I feel so blessed to have been given the chance to compete and actually be part of the champion team. I’m so proud of my team!”

Now that she has finished her stint as a cheerleader, Alex is focused on pursuing her other interest, makeup. Likewise, she’s applying a high level of discipline and commitment to this new endeavor.

Studying the art and technique of makeup under US-trained instructors at Make-Up Designory in Serendra, Bonifacio Global City, Alex supplemented the lessons by watching YouTube videos of makeup tutorials and doing hands-on practice at her family’s salon.

She also assisted some of her former cheerleading teammates at half-time games by offering to help them do their makeup.

She has actually begun to offer her services to her friends, too.

Given her drive to succeed, Alex’s future looks bright—whether she decides to become a full-fledged makeup artist or move on to another field.

“Don’t give up,” she said, “it’s usually the last key on the ring that opens the lock.”