Noel and Joel Trinidad–father and son bond onstage and off | Lifestyle.INQ ❮ ❯ 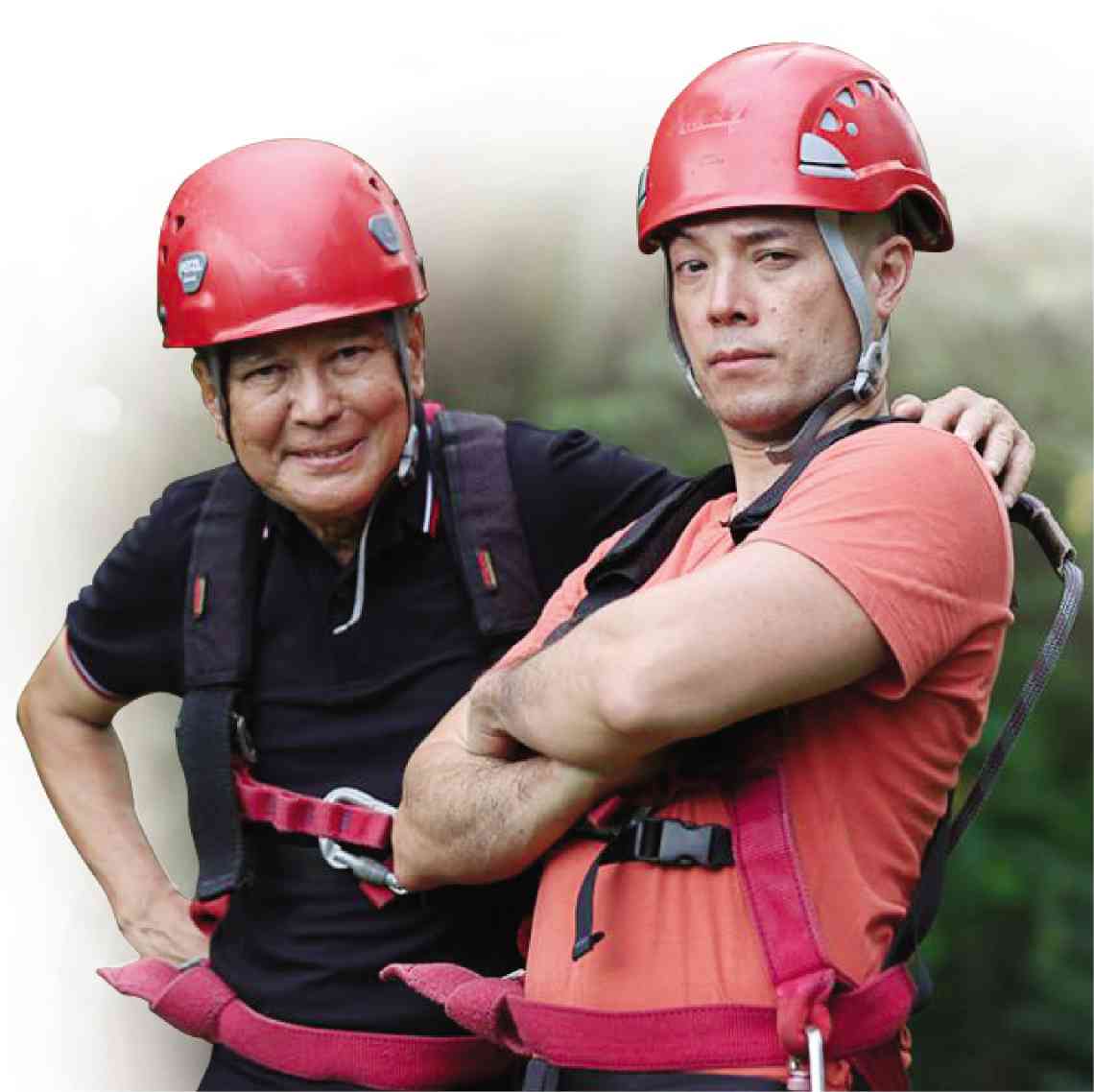 Noel and Joel Trinidad–father and son bond onstage and off 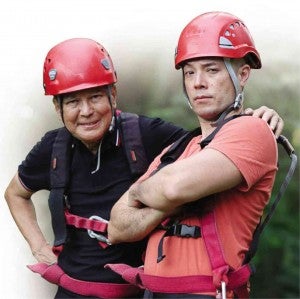 On a recent Monday at a P75-per-beer-bottle bar in Makati City, five original one-act-plays written by actor-director-playwright-producer Joel Trinidad were the main attractions for the night. Also having a good time with the Makati yuppies and some expats was Noel Trinidad. Gray-haired and still with the perpetually smiling face, the veteran theater-film-TV actor-host-comedian was all but proud of his son.

“That’s how I am known now. In show biz, people know me as the father of Ser Chief (actor Richard Yap in ABS-CBN’s late-morning soap, ‘Please Be Careful With My Heart’). In theater circles, I am Noel, the father of Joel Trinidad,” he said.

Produced by Joel’s three-year-old production unit called Upstart, the show was called “SOS: Showcase of Original Shorts.” The aim, as explained by Joel, is to expand the theater-going market by using unconventional, unexpected show venues.

After the show, the proud father stood in a corner, waiting for his turn to shake the hands of his hardworking son. He proceeded to the door after giving his son a pat on the back.

“I am saying this not because he’s my son, but Joel is very innovative, creative and brave,” said Noel. “As an actor, he accepts any role and does it well. As for me, I hesitate in accepting roles,” he added.

But when it came to the role of Roger de Bris, the gay director of “Springtime for Hitler”— the mock play within the hilarious Broadway hit “The Producers” which is being staged by Repertory Philippines at the Onstage Greenbelt Theater until Dec. 15—Noel had no second thoughts.

Noel had to beg off from doing the opening weekend of “The Producers” because of a TV taping schedule (Audie Gemora agreed to do Roger de Bris only for this week), but starting Nov. 22, father and son will share the same stage until the final show.

For Noel, doing “The Producers” excites him not only because he gets to act with his son.

“This is the first time I am playing a gay role. I accepted it as a challenge,” he said.

The closest he got to doing one was playing a woman in a movie: “I forgot the title. I played mother of the bida (lead actor), one of those teenage actors being launched by a major movie outfit, and Gary Lising (a fellow comedian) was the father.”

Joel said “The Producers” marks the fourth time he and his father are going to be in one show together.

The first time was in “The Miracle Worker” by the defunct Fringe Theater of the Philippines. “My dad played my dad,” he recalled.

Second was in 1999 for Repertory Philippines’ “Over the River and Into the Woods,” in which he played the lead while Noel was his grandfather.

“In an interesting twist, he alternated with his long-time comedy partner, the late Subas Herrero, in the role of my grandfather,” said Joel.

Third was in “Rivalry,” an original Filipino musical on the fabled Ateneo-La Salle basketball duel that had its initial run in 2012 and had a re-run in January this year.

“In both runs of ‘Rivalry,’ my Dad played the grandfather of the leads: The father of the two women whose husbands are former basketball rivals. I played a teacher in the first run and the Ateneo coach in the second run. I also wrote the lyrics to the show,” Joel said.

Besides his various roles in films, the elder Trinidad became popular for “Champoy,” the TV gag show he formed with Herrero. Noel also had a memorable role as the corrupt congressman Anding Tengco in “Abangan ang Susunod na Kabanata,” one of the longest running sitcoms in the 1990s.

Joel’s first memory of his father in theater was Noel playing the lead in “You’re a Good Man, Charlie Brown”: “Especially because my sister and I shared the peanut butter sandwich he used in the show. She was older, and got the half without the bite. On TV, I remember him in ‘Champoy.’”

Being compared to his famous father has never been a problem, said Joel. “It’s great! I’ve always idolized my dad.”

In “The Producers,” he admitted that he auditioned for the role while his father “was handpicked for the show.”

Obviously, he got the acting genes from his father: “I’ve been acting my whole life, in school plays and such, but my first professional theater production was the musical ‘Kismet’ for Repertory Philippines in 1989. I was in the chorus, and my role was so small even my parents couldn’t pick me out of the ensemble.”

His first lead role “was either ‘Sexual Perversity in Chicago’ for Dramatis Personae in 1990, if you consider that all four actors were of equal billing, or ‘The Mystery of Irma Vep’ for  The Artist’s Club in 1992, if you consider that [because] it was a two-man play with both actors playing all the roles.”

Joel’s first title role, however, was “Caligula” for the now-defunct Fringe Theater in 1992.

Ironically it was his dad who thought acting wasn’t a good thing to pursue full-time.

“He would’ve preferred me to have a more stable job. But to his credit, he said that whatever I’d decide on, he’d back me up 100 percent,” Joel recounted.

Noel, meanwhile, said he had always wanted to act; his first acting experience with a live audience was on radio.

“Remember the days of Pugo and Togo (the pre-and post-WWII comic duo)? At that time, radio plays had actors reading their lines on stage with a live audience. That’s how I mastered facial expressions and proper timing in the delivery of lines,” Noel recalled.

His first film was for a commissioned project directed by the future National Artist Lamberto Avellana.

“It was a campaign against the Huks (Hukbalahap, a rebel group active during the Japanese occupation until the 1950s) and I played the child of the lead,” said Noel.

In theater, he was part of the Avellanas’ Barangay Theater Guild, along with the likes of Naty Crame-Rogers, Nick Agudo and Daisy Avellana. Among his memorable roles was Shylock in “The Merchant of Venice,” staged by the Ateneo High School and directed by Onofre Pagsanghan.

When Rep was born in 1967, he joined the group and recalled being part of “Lysistrata,” “Charlie Brown” and “Rashomon.”

When he started a family of his own, Noel worked in advertising, but never really lost the itch to act. Knowing that theater won’t support his family’s needs, he grabbed the opportunity to act in movies and on TV. Aside from “Champoy,” he was part of the now classic “Batch ’81” by legendary director Mike de Leon.

Though he’s done dramatic roles for “Maalaala Mo Kaya” and some films, Noel has always been known and admired as a comedian.

“I’ve always been asked how I do it,” he said with a giggle. “The thing is, I don’t see myself as a comedian. I am an actor who does comedy and drama.”

He said comedy is all about instinct, that’s why he said he’s never been conscious of it.

When asked for advice on how to achieve the same longevity he’s had in the business, Noel said: “I think you have to love it (acting). Only in loving it do you become professional, disciplined and dedicated. But first, you gotta have talent. If you don’t have that, you’d rather be an accountant.”

Besides acting, father and son’s bonding time revolves around watching movies and plays and recommending books to each other.

“We also like to travel together, and to play board games as a family. Our favorite is Balderdash, which is hilarious,” Joel said.

They’re also in search of a comedy with only two characters that would fit them. At one time, they found a play that they thought would work, but, in the end, they both agreed it wasn’t funny enough.

Said Noel, “We have yet to find one. And yes, we’ll also produce it.”