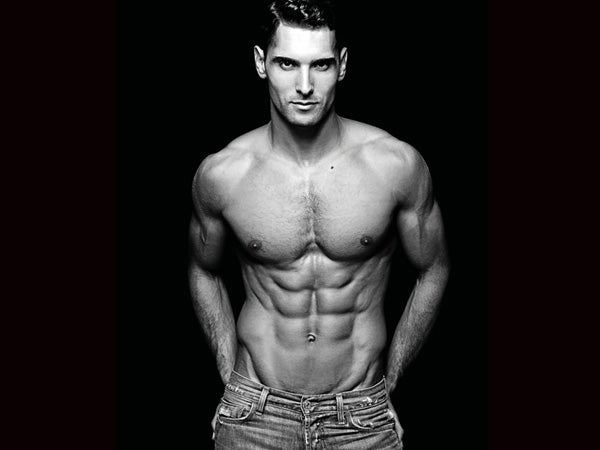 The man with the killer eight-pack abs 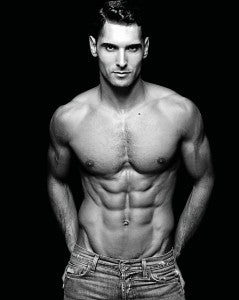 Along Edsa, you’ve probably noticed the billboard of a handsome hunk with killer abs, tantalizing you in Hang Ten jeans or SM casuals.

In another billboard, the same guy looks suave in a Memo blazer and slacks. Born in Spain to Moroccan parents, Abdel Abdelkader represents the current ideal in male models—the dark-haired, manly sophisticate with well-defined musculature.

Abdel started modeling in Spain when he vied for the Men’s Health cover competition. Out of 300 contestants, he ended up as one of the five finalists. He then tried his luck in China, where he stayed for three years. As his visa was about to expire, he wanted to go to Thailand, but his contacts took too long to respond.

Last February, he took a risk by flying to Manila and knocking on agency’s doors. He works as a freelance model and as a personal trainer to exclusive clients.  Filipinos gave him the monicker “Abs” for his chiseled, eight-pack abdominals and 32-inch waistline.

A knockout midsection like Abdel’s is all about being born with less body fat, and maintained by bodybuilding workouts.

Overloading the abs alone or any specific muscle group for that matter won’t dramatically reduce body fat or shred the muscles. Abdel believes in training the abdominals, the way one would work out any other body part. Exercise physiologists maintain that core strength is developed as a result of a total body workout or sports training. 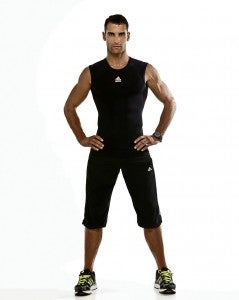 At eight years old, Abdel was developing the etched abs, but he was too skinny. His personal trainer taught him the right skills, and imparted discipline and the four basics of fitness: balanced diet, adequate rest (naps are a must), correct workout, and hydration. From 63 kilos (138 lbs), he gained 20 kilos (44 lbs). When he joined the army for two years, he went on boot camp training, which included a daily 12-km run. At 6’2”, he has now bulked up to 87 kilos (192 lbs).

Today he’s down to 83 kg or 183 lbs with a body fat of 6.7 percent. To get that ripped body, Abdel works out for almost five hours a day. He does 90 minutes of cardiovascular exercises in the morning; 20 minutes each of spinning, running and elliptical; and 40 minutes of abdominal exercises—leg lifts and variations of crunches.

Instead of counting repetitions, he performs them until muscle failure. For core strengthening, he holds the plank for four and a half minutes or until he feels the burn, and the side plank for five minutes to keep love handles at bay. 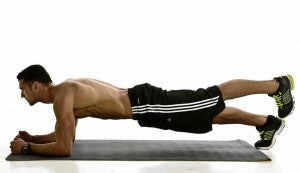 “I don’t use weights on my abs. I’ll get bulky.  I want to get flat and well-defined,” he says.

In the evening, he hits Gold’s Gym for circuit training and ring boxing with his trainer. He warms up with shadow boxing, then does circuit training. In 15 minutes, he does five cycles of his routine, which utilizes body weight and moderate weights: push-ups for the chest and arms; pull-ups for mass and strength building; side-to-side pull-ups; squat-to-shoulder press for overall conditioning;  front raises with kettlebells for the chest and mid-shoulder muscles; tricep dips, bicep curls, and abdominal crunches.

“I try to beat my time of two minutes and 20 seconds,” he says. After a minute-long rest, he repeats the circuit.

His abdominal workout is only for the tenacious, since they’re done on the bar.  Abdel does variations of the pull-ups—with knee raises, the more challenging straight leg lifts, and the knee twists for the obliques. To further challenge himself, he does the pull-ups with a 40-lb. dumb bell squeezed between his legs. For his back, he does the back extensions with a heavy plate.  When he wants to develop his pectorals, he can bench press up to 250 pounds.

“I vary my programs. I don’t want to get big, just sculpted. That’s why I do a lot of cardio,” says Abdel. 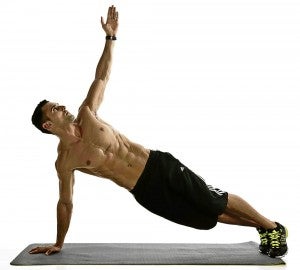 The 26-year-old model also values stretching and cooling down. Stretching maintains his flexibility, enhances his performance, and increases the joint’s range of motion. It also lengthens his muscles and improves his posture, thereby emphasizing his trim musculature. This is why he doesn’t have the hunched look of many bodybuilders.

“I don’t work out the shoulders too much. Others look like bulldogs,” he says.

Abdel keeps a healthy diet. While most people would get their caffeine kick in the morning, he starts the day by brewing a concoction of green tea, ginseng and peppermint which burns fat and cleanses the system. He learned to drink tea for health in China. He takes the hard-core Muscle Tech Nitrotech whey protein for breakfast and dinner, and his tea between meals.

Abdel is singleminded in his fitness routine. “I focus. I don’t think of anything else. I just have fun. In the past six years, I never got bored.   I’m not the kind who goes to the gym to talk. I motivate myself each time I go to the gym.”

Next month, he plans to go back to the five-day split workout which consists of lifting heavy weights with less repetitions.

Abdel has been sharing his experience with others. In the Philippines, he’s been training co-model Alex Vega Hidalgo and Tatler’s editor in chief Anton San Diego.  When Hidalgo started, he couldn’t last five pull-ups on the bar. After three months, he easily performs 16 pull-ups which, by the way, is a test of manly strength.

As a trainer, Abdel drills his clients with military discipline. “I’m not here for the money. I’m just wasting my time and the client’s time. I’m tough with them. With me, you get results.”

On San Diego, he applies the carrot-and-stick approach. “He competes against me and sees how much I do,” says Abdel. “Other clients are just yakking on the phone or sitting around. He really trains.”

Can ordinary mortals get an etched abdomen or, at least, a taut one? Only if the excess fat layer has been considerably reduced through these essentials:  “Diet, sleep, hydration and working right,” says Abdel. “It’s not the number of crunches. You have to feel the muscle contraction. I can teach the client how to do it correctly, but they have to find the point where they can find it. That’s when they get results.”