‘We requested a Bangkok supplier to send as many thongs . . . People need something for their feet’–Nedy Tantoco | Inquirer Lifestyle ❮ ❯ 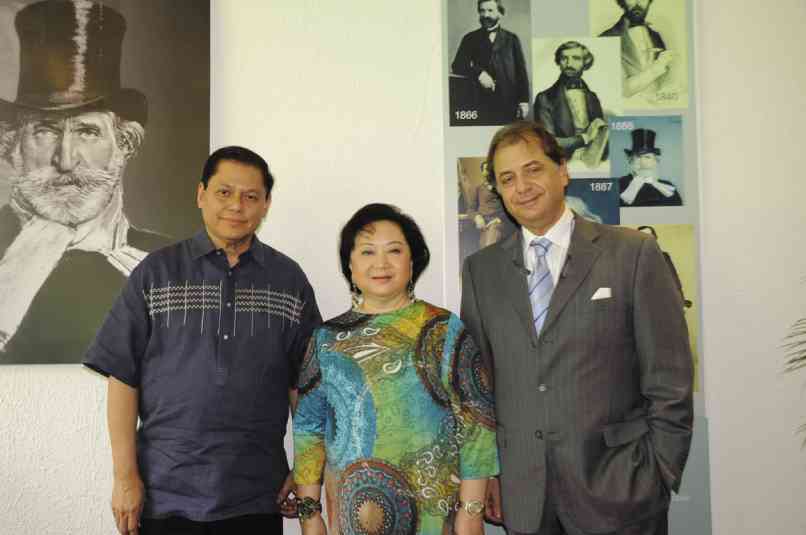 ‘We requested a Bangkok supplier to send as many thongs . . . People need something for their feet’–Nedy Tantoco

“Viva Verdi!” a concert celebrating the bicentennial of composer Giuseppe Verdi, is set to be this year’s biggest event.

Organized by the Italian Embassy and its cultural arm, the Philippine Italian Association (PIA), the concert will be on Dec. 10 at the Cultural Center of the Philippines. It will present excerpts from Verdi’s operas, to be performed by two Italian guest artists, an Italian conductor and the country’s best singers.

However, at the press conference in the Italian ambassador’s residence, relief aid and the relevance of opera in the aftermath of “Yolanda” were the talk.

Italian Ambassador Massimo Roscigno reported that his government has donated 2 million euros (P116 million) for the typhoon victims, while other civic organizations have raised 3 million euros.

CCP president Raul Sunico pointed out the therapeutic effect of music. Science has shown that music not only calms but is also an invaluable tool in helping a person respond to stress.

For her part, arts patroness Zenaida “Nedy” Tantoco, president of Rustan’s Corporation and PIA, said that their family businesses immediately responded to the tragedy. Rustan’s, Stores Specialists Inc., Shopwise and Family Mart prepared P25 million worth of food and medical aid for Leyte.

When the international press reported on the unprecedented catastrophe, letters of sympathy from Rustan’s suppliers across the globe poured in. The Tantoco-owned companies wrote  them, asking for the basics.

“We requested a supplier from Bangkok if they  could send as many thongs as they could. People need something for their feet. We hope our suppliers from all over the world would also send clothing,” said Tantoco.

Tantoco recalled that in 2009, the company also gave some 50,000 pairs of pants, donated by Hong Kong-based suppliers, to victims of typhoon “Ondoy.”

“These were not even the big brands. Suppliers of our supermarkets also gave shirts,” she said.

After providing food and clothing, Tantoco said they will address shelter next. She quoted her son, Anton Huang, SSI’s vice president, as saying that the employees of Rustan’s Group of Companies have collected P1 million for the typhoon victims.

The money will be donated to Gawad Kalinga to help rebuild affected communities.

This year, proceeds of “Viva Verdi” will be divided among the projects of CCP, the Italian Embassy and PIA. Tantoco is proposing to donate PIA’s share  to the typhoon victims.

Last year, Rustan’s and Stores Specialists Inc. supported the comic opera “The Barber of Seville,” which raked in P5 million. Half of the proceeds have been earmarked for the proposed US tour of the Philippine Philharmonic Orchestra with cellist YoYo-Ma as  guest artist in New York. Tantoco said they are still looking for an airline partner.

Tantoco said she’ll spend the holiday season quietly with her family, to empathize with a country that still has to recover from the tragedy.