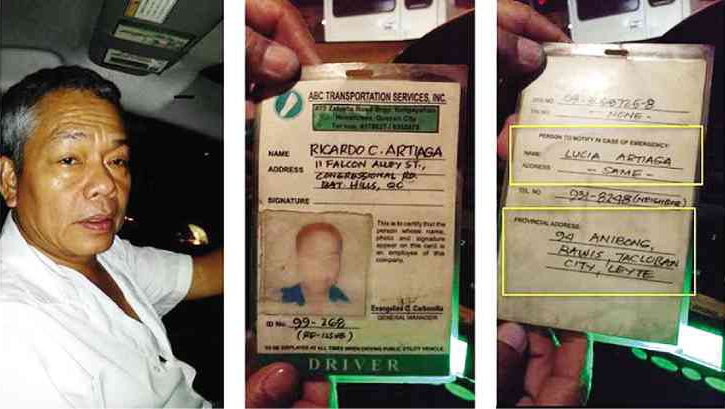 TATAY Ricardo on the night the author met him

Nov. 14: I just met Tatay Ricardo Artiaga, a taxi driver in Manila who is from Tacloban. He apologized for having swollen eyes.

He had been crying the last two days because he could not get in touch with his wife, children and grandchildren—ever since Supertyphoon “Yolanda.” He told me that his other child, who is in Manila, already checked the list of survivors on ABS-CBN and GMA 7 but was not able to find their names.

He planned to go to Tacloban.

There must have been a reason, I thought, I took the cab instead of the train going back to Makati and why I had spare money in my wallet. I immediately asked Tatay to take me to the nearest market.

I bought him a phone, a charger and a Smart SIM card, and loaded it with credit to last a week. The female store owner also donated a pair of slippers to Tatay.

I was telling myself, “Ronjo, utang na loob, ’wag kang iiyak.” But Tatay broke down. And sh*t, I broke down as well.

He was thanking me and was thanking the Lord. But honestly, deep in my heart, I knew that I should be even more thankful because we were all spared in Manila.

Nov. 16, updates: A very kind soul arranged Tatay Ricardo’s transportation. He and his daughter are expected to be in Tacloban by tomorrow morning, Nov. 17. There will be a couple of people accompanying Tatay on his trip. There were a lot of people who offered to help Tatay Ricardo. The figures were overwhelming. Help came from all parts of the world.

And perhaps the best news I got today came from his daughter who messaged me a few moments ago:

I cried after reading the text. This is a miracle, indeed.

Nov. 20: Tatay was able to meet his family last Sunday, Nov. 17. His wife and kids in Tacloban made it through the typhoon by hanging on to a tree. They were able to make it back home to Quezon City on Nov. 18.

Ronjo Solis is a telecommunications engineer and an active member of CFC Singles for Christ.