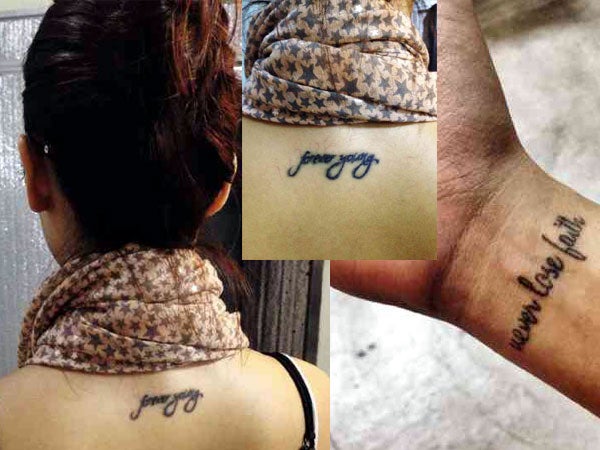 Left and inset, her back and wrist tattoos. “It made me happy that I got to express myself and I got to do what I wanted to do,” she says. PHOTOS BY WALTER ANG

Singer-actress Frencheska Farr has two tattoos. Instead of visual designs, she has two statements branded on her body.

She got her first tattoo at her nape, “Forever Young,” three years ago on her birthday.

“I really wanted a statement that’s simple yet meaningful to me,” she says. “I searched online for fonts, then I had my tattoo artist copy it.

“I just wanted to feel what it would be like to get a tattoo. I was excited. It was painful but I enjoyed the thrill of it. It made me happy that I got to express myself and I got to do what I wanted to do.”

The second one, “Keep the Faith,” on her inner right wrist, was done this year.

“Both tattoos serve as reminders for me as to what and who I am,” she says.

She doesn’t plan on getting a new one anytime soon but is not closed off to the idea.

“Only until I achieve something great. I don’t know when or what great is but I’ll know when I’m already there,” she notes.

She’s currently playing a character that may not be immediately accepting of tattoos. Farr is having her professional stage debut playing “nice” girl Sandy Dumbrowski in 9 Works Theatrical’s ongoing staging of “Grease,” the iconic musical about the love lives of teenagers in 1950s middle America.

Directed by 9WT artistic director Robbie Guevarra, with book, music and lyrics by Jim Jacobs and Warren Casey, the staging at RCBC Plaza’s Carlos P. Romulo Auditorium includes songs from the 1978 movie adaptation (such as “Hopelessly Devoted to You” and “You’re the One that I Want”) starring John Travolta and Olivia Newton-John as the lead couple.

Sandy Dumbrowski eventually sheds her inhibitions and joins the rest of her friends’ groove. If Farr had her way, she’d offer this life advice to Sandy: “Get a tattoo—not just to fit in but also to get to experience everything life has to offer.”

Farr was tipped off to the auditions by Gian Magdangal, whom she’s worked with in the defunct Sunday afternoon variety TV show “Party Pilipinas.”

“I’ve forgotten everything that happened at the audition because I was so nervous,” she says, laughing. “But I’m happy that I went through it.”

She’s learned to adjust her acting style, since she’s more used to acting for TV and film. “In theater, I have to make bigger movements so I can show the audience the emotion I’m feeling. On TV, you can make little movements and the director can just shoot a close-up. I also had to work on my singing and dancing because in theater, you can’t make mistakes, there are no second takes.”

Farr had participated in productions during high school. “I joined the high school choir, and I represented our school in inter-school competitions. I was shy at first but I eventually became more confident of myself,” she recalls.

In 2009, she joined and won GMA’s television singing competition “Are You the Next Big Star?” Regular appearances in several TV shows followed.

She was then asked to audition for the movie musical “Emir.” She landed the lead role of a nanny in a royal household of a fictional emirate in the deserts of the Middle East.

“Surprisingly I got the role,” she says, recalling that acting wasn’t one of the things she thought she’d ever enjoy doing. “But when I did it, I discovered that I could act and I fell in love with it.”

The character that Sandy falls in love with, Danny Zuko, the leader of the student clique/gang T-Birds, is played by Magdangal. He was recently seen in Spotlight Artists’ restaging of Musical Theater Philippines’ “Katy!” and 9WT’s “The Wedding Singer” and “Rent.”

Another debuting actor, Rafa Siguion-Reyna, plays Kenickie, second-in-command of the T-Birds, while Iya Villania alternates with Jennifer Blair-Bianco as Betty Rizzo, the leader of the girl’s clique, the Pink Ladies.

Surprise guests fill in the role of Teen Angel, an apparition that will serenade one of the characters. Tom Rodriguez of “My Husband’s Lover” fame was the Teen Angel on opening night.