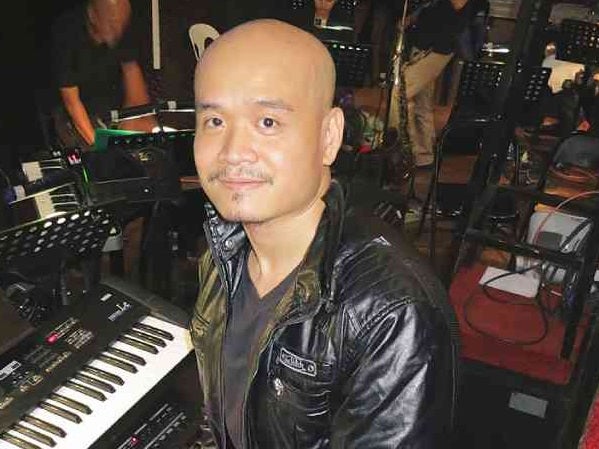 With that kind of classical background, you would expect him, after graduation, to become a member of a cultivated symphony orchestra like the Philippine Philharmonic, no?

No. Instead he stumbled pell-mell into the raucous world of musical theater.

It was his guitar professor at UST, Butch Roxas, who was responsible for this fortunate turn of events. Roxas, a friend and mentor, had asked Javier if he would be interested in being the musical director (“MD” in theater parlance) of a musical his friend was directing and producing.

“I told him I was scared to accept the position because I didn’t have any musical theater background,” Javier recalls.

But he opted to be the repetiteur (rehearsal pianist coach) and pianist of the band, on condition that Roxas be the MD of the show. It turned out that the director was Bart Guingona of Actor’s Actors Inc., and the musical (Jason Robert Brown’s “The Last Five Years”) starred theater greats Audie Gemora and Menchu Lauchengco-Yulo.

“That was my first foray into theater, and the first of the countless shows and musicals I did with the first lady of musical theater, Menchu Lauchengco-Yulo,” Javier says.

Memorable shows for him include “Disney’s The Little Mermaid,” where he conducted an orchestra for the first time, and Sondheim’s “A Little Night Music,” which he conducted at The Esplanade, Singapore.

“In the Heights” has a Latino setting, and through it he met the Tony Award-winning composer Lin-Manuel Miranda, who flew to Manila to grace the show’s opening.

In “Rock of Ages,” Javier sported a mohawk and played the rock anthems of the 1980s. And in the recent “Carrie,” he worked closely with the Academy Award-winning creators.

And then there’s “The Addams Family,” which opened just Friday and runs until Dec. 1.

His favorite musical, however, remains “Next to Normal,” which cast Lauchengco-Yulo as a bipolar housewife, with husband Jett Pangan at the receiving end of her mood swings.

“Such beautiful music, such a brilliant piece of musical theater,” says Javier.

Through the years, this music man has worked with some of the A-listed directors and actors in the industry.

“(Director) Floy Quintos believed, when no one else did, that I could compose and write music for his original Filipino musicals,” he says.

And, of course, he has high praises for favorite actress Lauchengco-Yulo: “It is always a joy to work with her, her generosity as an artist and a person is nonpareil.”

ManMan Ansico taught him how to be a more effective musical director, while from director Chari Arespacochaga he learned the value of planning ahead and being in charge. And, this humble musical artist declares, “Director Bobby Garcia pushed, shoved and toughened me up. He gave me all the opportunities to grow and redeem myself even after all the mistakes I made. I owe these people a lot.”

As a musical director, one of the biggest challenges for him in every show “is how to put together a band/orchestra and make it sound good after two or three rehearsals. Sometimes, I eat stress for breakfast. Yet when audiences who paid hard-earned money just to watch our show tell me that my band sounds good, and that my music helps in telling the story of the show, that’s the ultimate reward for me.”

After 10 years of doing musical plays, he has learned that diligence, patience and time are very important and that nothing is impossible (like with God!).

“You can’t be a lone wolf and rely on your own because theater is all about collaboration,” he says. “It pays to be a team player. Respect begets respect. Whatever happens, the show must go on. You shouldn’t be afraid to fail or make a mistake. Mess a line or a tune, but find a way to get back and finish the show.”

And there’s that old truism that makes every performer quake: “You are only as good as your last performance.”