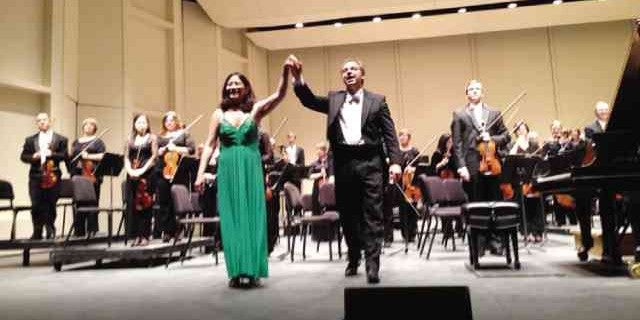 Musical nights in Samar and Leyte

How Eastern Samar and most of Leyte look like today found a haunting musical equivalent in an Antonio Molina composition, “Oras Mangitngit” (Dark Hours), interpreted by a distinguished soprano from Leyte, Salvacion Oppus Yniguez.

I heard the piece in the FB posting of pianist Najib Ismail, and I thought, what a beautiful song it was; it might as well be describing the  utter desolation in the Visayan landscape.

The musical piece hardly heard in voice recitals is a gem of an art song, and tenor Abdul Candao described the Waray soprano’s voice as a cross between Renata Tebaldi and Conching Rosal.

The late Yniguez happened to be the teacher of tenor Lemuel de la Cruz who once sang for landslide victims of Leyte  some years ago.

As I listen to the Molina piece as sung by Yniguez, I reflected on the destruction of the Tacloban Cultural Center and what remained of the  Marcos Olot Mansion,  where the likes of Van Cliburn and Mstislav Rostropovich were once visitors.

When Imelda Marcos was  taking voice lessons from Adoracion Reyes (mother of Alice Reyes and Edna Vida),  she was better known as the Rose of Tacloban.

The island has had its share of memorable songs, such as “Calbayog Ko,” “Lupad Alibangbang,” “An Iroy nga Tuna” and “Handum”; and native dances such as Tiyadot, Aragoniza, Jota Calbayoguen and Curacha, the last figuring in the acclaimed Chito Roño film.

It was to revive the memory of Gomez that this writer mounted the Samar music festival in 2011 in Calbayog City.  The featured artists—violinist Gina Medina; pianist Mary Anne Espina; baritone Andrew Fernando; and flutist Christopher Oracion—all received standing ovation at Ciriaco Hotel in Calbayog City. Many in the audience were members of the youth orchestra of Christ the King College.

For my last concert in Samar, an upright piano traveled for two hours from Catarman to Calbayog. We had to rent and transport the musical instrument in another town, as the Calbayog  orchestra director from Ozamiz City didn’t want the school’s upright piano touched for the  concert. He was noticeably absent in all the well-received recitals.

Pianist Cecile Licad intimated she had the Philippine tragedy in mind when she played Rachmaninoff’s Second Piano Concerto and Variations on a Theme by Paganini in San Antonio, Texas, and Rhode Island. Both concerts ended in standing ovations.

An American music critic reported: “Happily, the reality Friday night in the Majestic Theater was more complex. The pianist Cecile Licad found a world of human nuance beneath the concerto’s opulent surface, and music director Sebastian Lang-Lessing’s fleet mountaineering up the Bruckner’s craggy slopes made it a frankly pleasurable experience.”

The critic compared Licad’s well-received interpretation with the 2011 performance of Lang Lang of the same concerto, and noted: “If Ms Licad did not quite match the technical bravura of Lang Lang, who essayed Rachmaninoff’s Second Piano Concerto here in 2011, [but] the shades of meaning and mood she brought to this staple more than compensated [for that]. She allowed the opening statement to build gradually from pensiveness to power. Her very flexible phrasing and coloristic effects seemed to portray a character, almost as a fine actor would. The slow movement floated dreamily, but also with a wonderful feeling of movement through a yielding medium, like tall grasses. Principal clarinet Ilya Shterenberg joined the soloist in a particularly lovely dialogue.”

“It is horribly sad,” said Licad upon watching the widespread devastation in Samar and Leyte. She expressed willingness to participate in any fundraising concert.

Another artist who wanted to cheer typhoon victims is violinist Cho Liang Lin, who has    forthcoming engagements with the National Symphony Orchestra of Taiwan and the symphony orchestras of Detroit, San Antonio, and Shanghai. He wrote to Licad, saying how deeply he was touched by the plight of typhoon victims.

“If there are events that I can help to cheer the victims, please let me know. I am in!” the noted violinist said.

For this reason, “Petite Messe Solemnelle” by Gioachimo Rossini is a fitting presentation on Dec. 3 by the Cultural Arts Events Organizer (COEA) at Ayala Museum.

Maestro Alberto Zedda, a Rossinian specialist, said: “The ‘Petite Messe Solemnelle’ can be at par with Verdi’s Requiem in its dramatic intensity and memorable melodies. The work opens with a hushed intensity, ending with boisterous high spirits, abounding with memorable tunes and rhythmic vitality that brings a delightful and a life-enhancing musical experience.”

The family of one of its soloists, tenor Arthur Espiritu, had witnessed the wrath of Hurricane “Katrina” some years back.

Espiritu said he was also horrified upon seeing the extent of the damage wrought by Typhoon “Yolanda.” “The destruction is so unreal, and I couldn’t imagine how much suffering those people have experienced.”

He recalled:” That hurricane destroyed our home. We had to pick ourselves up and rebuild from zero. I can feel what they felt. But compared to what I saw in New Orleans, what happened in Samar and Leyte was far worse. The extent of the damage is huge and covered a much wider range of land. More lives were lost. It just breaks my heart.”

Espiritu is also raising funds for relief operations for the town of Llorente in Eastern Samar, where his wife, Christina Jobocan, comes from. “We have no word from Christina’s family, or from our nuptial godfather, Llorente Vice Mayor Nathaniel Hugo. I was so nervous for her because it was all she could think of.”

After his Manila and Hong Kong engagements, the internationally acclaimed tenor flies to Leipzig, Germany, to rehearse for Oper Leipzig’s new production of “Don Pasquale”; then off to Baden Baden in March to perform Edmondo in Puccini’s “Manon Lescaut” with Maestro Simon Rattle at the Baden Baden Festspielhaus. He will debut as Fernando in Donizetti’s “La Favorita” in St. Gallen, Switzerland.

The other soloists of the  Dec. 3 “Petite Messe Solemnelle” include soprano Camille Lopez Molina, soprano Margarita Giannella and bass-baritone Noel Azcona, with the prestigious Viva Voce (16 of the most promising young singers today) with pianist Najib Ismail, Farley Asuncion and Melissa Taqueban under the musical direction of Gideon Bendicion and Camille Lopez Molina.