How about a shower that sings, too? | Inquirer Lifestyle ❮ ❯

WATERPROOF and detachable, Moxie is the first ever Bluetooth music system that works in the shower.

How about a shower that sings, too? 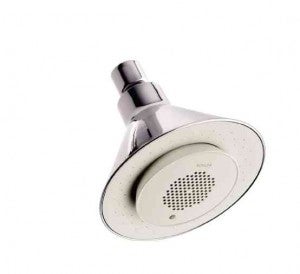 Since they’re developing products like toilets, bathtubs, sinks and tiles that become part of homes, hotel rooms and office buildings for at least 10 to 20 years, trend spotters and designers at Kohler are more mindful of “sustained strengths” than “fashionable trends.”

“We look at such factors as socioeconomics, history and cyclical palettes that take place in history,” said Nancy Yusko, Kohler’s lead industrial designer for decorative product and color based in Kohler, Wisconsin. “We also look at style trends and how they might impact color, materials and finishing.”

Looking across industries to include trends in fashion, automotive and other areas of the home beyond the bathroom and kitchen have also become musts in Kohler’s search to provide consumers in various regions and market segments with products that are responsive to their needs, lifestyles, prevailing conditions and even aspirations.

Wall-mounted toilets and sinks, for instance, bridge form and function in countries like Japan, Singapore and Hong Kong, where space is at a premium. In India, Kohler responded to people’s need for a fuss-free, low-maintenance bidet by providing them with an affordable alternative: high-tech, touch sensitive Numi, which requires electricity and has become a hit in Japan.

For instance, the idea for the Moxie of “bringing fun and music” in the shower originated not solely from the US and Europe, but from exchanges with Kohler’s design teams in Wisconsin and Shanghai. The device is a showerhead with detachable and Bluetooth-ready speaker.

Magnetic and waterproof, the Moxie allows the user to sing along with his or her favorite songs beamed from a computer or iPhone. Singing in the shower has never been this easy.

“In general, today’s trend in the Asian market is about authenticity in color and material,” said Shanghai-based Lun Cheak Tan, Kohler’s Asia-Pacific studio director for kitchen and bath. “True materials such as wood and stone are more widely used and celebrated by designers in product, furniture and interior design.”

Tan has also noticed how hotels, which continue to sprout in almost every major and emerging Asian city, are customizing architectural and interior design themes around cultures specific to the region where they’re located.

“This development provides a more unique and authentic experience for their customers,” Tan added. “As designers, this also means that the choice of colors, materials and patterns we get to pick from has never been more diverse and exciting.”

Globalization may have become the buzzword among consumers, but Tan has also noticed a growing trend throughout Asia that’s influenced by a greater awareness and confidence for the preservation of one’s unique cultural identity and design.

This can be seen in sinks, tiles and even toilets and urinals with more ethnic or regional patterns. If the consumer is willing to pay a premium, he or she is no longer stuck with kitchen and bath fixtures in solid and neutral colors.

Surprisingly, this trend isn’t being embraced solely by Asians, but by more adventurous and creative types in Europe and North America.

But even neutral colors, the safest and most universally accepted choice for the home, have also evolved over the decades. Back in the ’70s, for instance, white, light gray and beige tiles had golden undertones, said Yusko. In the decadent ’80s, neutrals became “peachier.”

Following the minimalist and industrial feel that influenced the ’90s and 2000s, neutrals shifted to cooler hues.

For his part, Tan believes that design trends go through an evolutionary process instead of a “revolutionary one.”

“Through an experienced trend spotter, one should be able to spot an emerging trend before it becomes widely adopted,” he said. “There’s also more than one trend in existence in the market at any one time. How long a trend stays fresh before it becomes mainstream and is replaced by the next would depend on many factors.”

Since it embraced globalization early on, Kohler knows how important the Asian market is in its bid to grow, diversify and ensure future viability.

Through its lone dealer in Hong Kong, it was one of the first companies to reestablish its presence in China even before the country’s communist leadership began opening up its economy to the world in the late ’80s.

Kohler has since established an office in Shanghai and an extensive dealer network in China. Despite the stiff competition posed by cheaper, lesser-known brands, Kohler has remained the preferred brand in China today.

In fact, it practically never left China as seen in a number of old, pre-war hotels in Shanghai, which were refurbished fairly recently. Most of them were found to have been equipped with US-made Kohler plumbing fixtures dating back to the 1920s.

Almost a century on, Asia has become almost unrecognizable. Homogeneity no longer works in a culturally diverse region with a growing purchasing power.

“In more developed cities such Singapore, Hong Kong and Shanghai, consumers tend to prefer designs that are more subtle in form, texture and color,” said Tan. “And because space is limited, consumers in these cities tend to look for simpler, more muted designs that work effectively within a smaller environment. ”

In developing cities flushed with “new wealth,” Tan has seen the opposite. Nouveau rich customers in certain Indian and Chinese cities, for instance, opt for more “expressive” designs in bolder and richer colors.

Apart from being one of the leading suppliers of kitchen and bath fixtures in the US, Kohler is now number one in China and has a growing presence in India and Southeast Asia, including the Philippines.

Established in 1873 by John Michael Kohler, an Austrian immigrant, the Wisconsin-based company that carries its founder’s name first manufactured farming implements before evolving over the decades to expand into other lines such as kitchen and bath, power generation, furniture and fixtures and even hotels, resorts, spas and world-class, PGA-certified golf courses in Wisconsin and Scotland.

It has remained a family-owned company under the helm of CEO Herb Kohler, who belongs to the third generation of Kohlers. His son David Kohler is company president and COO.