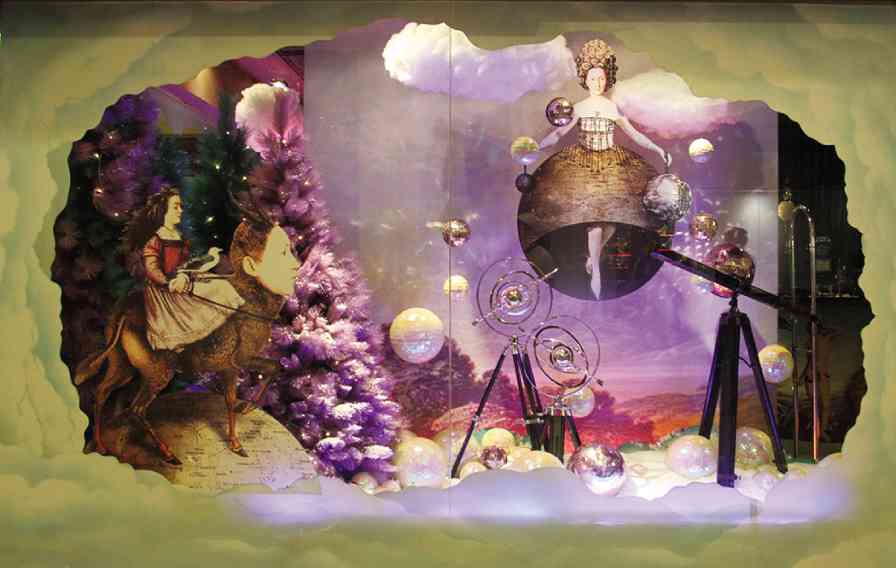 Fantasy and whimsy for Christmas

Is it a dream or is it a joke?

That’s the usual reaction when shoppers see the window displays at AC+632 at Greenbelt 5 and Firma at Greenbelt 3.

On the Greenbelt 3 window, a hybrid bird couple and humanized birds are outfitted in Regency costumes as if ready for dinner, decked with tabletop accessories.

Firma’s hallmark carved ostrich eggs with crystals and semiprecious stones are pieces de resistance. In a celestial-theme window, a woman wearing the globe as a ball gown, hovers over a cluster of silver armillary spheres and a telescope.

At AC+632, Titania, Bottom and fairies, characters from Shakespeare’s “A Midsummer Night’s Dream,” frolic with Burmese-made deer in the English forest. In the era of laptops and tablets, the main items on display are English writing accoutrements nestled among the decorative foliage and animals.

“The economy has to go on,” maintained style mavericks and Firma owners Chito Vijandre and Ricky Toledo.

“Zeitgeist, luxury, quirkiness, sophistication, humor and imagination,” the décor philosophy of Vijandre and Toledo have also become their winning formula for display and merchandising.

Their windows aren’t just eye candy. They use their windows  to grab attention and stop traffic.

Their stores have won Ayala Merchants’ Awards, given by Ayala Malls, for marketing, visual merchandising, and Store of the Year.

But what amounts to a moment’s excitement for passers-by who take notice of  their displays—and the accolades from their landlord—is the result of weeks of fastidious research and preparation. The themes are inspired by the travels of the pair and design fairs.

“Times are hard in Europe. The economy is down so people need an escape. Romance, surrealism and fantasy are means of escaping,” said Toledo. Hence, the other-worldly themes and opulent objects.

The stores draw heavily from 19th-century European culture, as shown by the silver samovars and Victorian silver at AC+632.

At Firma, known for making visual puns, Odette and Odile of the classic “Swan Lake” enjoy a role reversal as they are turned into huntresses in the wintry forest. In front of them, a wooden sled is decked with fashion accessories and objets d’art.

Toledo explained that the displays are thoughtfully layered. The store window characters are culled from old books and printed on photo paper and pasted on Sintra board. They are set against a tarpaulin backdrop, lavishly interspersed with the elaborate merchandise.

The trees at Firma depart from the usual evergreen with holiday tinsel. The trees come in unusual colors of sea green, lilac and copper, juxtaposed against large Christmas balls, individually sequined by Vijandre’s seamstresses and the family driver.

In keeping with the trend for opulence, designer Vijandre has produced silk ties, adorned with hand-cut peacock feathers and another embellished with vermeil and enamel medallions.

Merchandising is offbeat as well. “The forecast focuses on the unusual, bordering on the surreal and the strange. People are tired of classics. Even if you have classic elements, you need to combine them with something  offbeat,” said Toledo.

True to  its Old World store image, AC+632 offers antlers and stuffed animals that suggest great Victorian parlors. One romantic piece is a lamp made of resin deer antler base,  its shade bordered by Prince of Wales checks. The dead animals ironically add life and warmth to modern interiors.

Animal skulls, made of politically correct resin, are ubiquitous in both stores.

With a wild boar’s skull on hand, Vijandre declared, “This was for dinner!”

Toledo said the skulls are eccentric statement pieces, given their sculptural forms.

Firma continues to produce its signature bejeweled pillows and ostrich eggs. The eggs are  cast-offs from Cagayan de Oro.  An artisan chisels them to create intricate lace patterns.

There are also accessories by upcoming designers who revert to traditional techniques. Earl Garianda, a finalist in Inquirer’s Look of Style Awards, applies the repoussé (hammered metal technique from the back side to create a design) for his minaudieres. Another finalist, Angela Angeles, makes filigree (delicate metalwork) jewelry.

However over-the-top their merchandising may seem in these times, Toledo and Vijandre are resolute about their décor credo. “We’re just doing our job like everybody else, and we should do it well.”