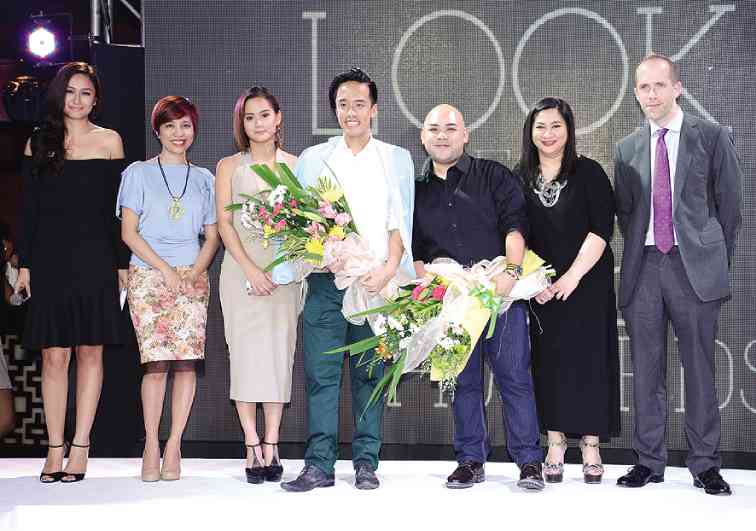 Produced by Inquirer Lifestyle, Look Magazine and the British Council, headed by country director Nicholas Thomas, with Bench, SM Accessories and Systema Tooth & Gum Care as major sponsors, the Look of Style Awards is now on its fourth year.

It’s the only nationwide fashion design competition that sends the winners to the prestigious Central Saint Martins in London, under the sponsorship of the British Council.

This year’s awards   added a category—the accessories design. The winner is awarded a brief course at Sheffield Hallam University outside London.

Escario and Felipp are both from Cebu.

Past winners Pablo Cabahug, Geof Gonzales and Roland Alzate credit the Look awards for jumpstarting their careers and providing them valuable insights derived from the contest’s scholarships and mentoring programs.

Each of the past winners showed a three-piece collection in this year’s awards night.

This year’s contestants worked around the theme “Pinoy Goes Global.”

Escario and Felipp will receive an all-expense-paid trip to England and scholarships courtesy of the British Council.

Escario, who also won a special award from Bench, is free to take up any short course of his choice at Central Saint Martins (CSM), the same school that produced such fashion design legends as John Galliano, Phoebe Philo, Stella McCartney and the late Alexander McQueen.

The same privilege awaits Felipp at the Sheffield Hallam University.

Escario, 25, did a three-piece collection made of “readily available” materials like jersey, duchess satin and Mikado silk in such colors as black, dove gray and orange.

“My intentions and materials were simple,” said Escario, a nursing graduate.

“I wanted to limit my collection to readily available materials in the Philippines. The lines and cuts were simple, but with enough play on techniques. My tops, for instance, were ‘volumized’ for more visual impact. Adding pops of orange was a last-minute decision I had to make to kill the boredom.”

These half brothers grew up in the same house. Escario credits his older brother for exposing him early to the business.

He also grew up admiring the works of such leading Cebu designers as Philip Rodriguez, Oj Hofer and Arcy Gayatin.

“Jun and I are very close,” said Escario, who has been designing for almost 10 years now.  “I remember him bringing me to all his shows at the Midtown and Cebu Plaza. He and his assistant designers also taught me how to sketch. I owe it all to him.”

As part of his brother’s team, the younger Escario shuttles between Cebu and Manila to attend to their bride clientele.

He knows what to focus on at CSM.

In the case of Felipp, 24,  both sides of the family gave him the necessary tools to succeed in his field.

For Look, he did three minaudières that combined cast and gold-plated brass animal figures with  materials sourced from Cebu, such as Mactan stone, wood veneer and black acrylic.

“My maternal grandfather and his brothers started Suarez Bros,” said the UP Cebu Industrial Design graduate. “My paternal grandfather, the San Pedro side, was the creative talent behind the rings. They eventually joined forces.”

He has been professionally designing for almost two years now. He also took mentorship programs under Hofer and furniture and industrial designer Kenneth Cobonpue.

“My vision is to make Neil Felipp a global jewelry brand,” said Felipp, who plans to take up accessory and product design in Sheffield.  “I want to elevate it and make it more than just a brand made by a Filipino.”

One of his winning pieces was a wooden minaudière adorned with molded metal in the form of tiny monkeys. Dubbed as the “simian series,” the collection also featured a cuff and necklace made out of these tiny metal monkeys.

The other piece consisted of off-white Mactan stone with a decorative snake element also made of gold-plated brass.

The piece was inspired by the unlikely love story between snake woman Medusa and Midas, the king who turns everything he touches into gold.

“I love Greek mythology,” Felipp said. “What if someone like Medusa and Midas meet and fall in love with each other? Since both  are cursed, they decide to end their miseries with a deadly embrace. As Medusa turns into gold, Midas turns into stone. Their lips are forever locked in a kiss in the form of a minaudière.”

Felipp is aware of how animals have often inspired designers. What sets his work apart are the stories behind the pieces.

“All over the world, you could see all sorts of animal inspirations,” he said. “But the story in each piece I design makes a difference and adds to the whole experience.”

His third piece, which was auctioned off to benefit victims of Typhoon “Yolanda,” was also a minaudière with a brass dragon clasp dubbed as Suzy Wong. (A number of judges and contestants also donated items for auction.)

“We all know the story of Suzy Wong, the hooker with a golden heart,” said Felipp. “Suzy looked beautiful and fragile on the outside, but she’s tough on the inside and has the heart of a

dragon; I want to empower any woman who would hold this piece. It may look fragile, but there’s more to it than meets the eye.”

This year’s Look of Design Awards proved to be the biggest yet in terms of number of participants, awards and prizes.

Apart from bagging the grand prize, Escario won the Bench Award for apparel, while shoe designer Jun Artajo, one of this year’s accessories finalists, won a special award from SM Accessories.

Artajo, who has been designing wedding shoes since 2012, did a pair of platforms made of braided abaca and wood in gradating shades of orange.

“I was inspired by the headgear of the Ivatans of Batanes called vakul,” he said. “I named each of my masterpieces as Laji, Kalusan and Kanta, which the Ivatans sing when they’re happy and feeling prosperous.”

On Awards night itself, the university decided to add scholarships and named the four finalists.

Leyesa was inspired by three of Batangas’ iconic cathedrals to produce a collection of statement neckpieces. He won grand prize in the accessories division of “Weaving the Future,” a contest organized by the Fashion Design Council of the Philippines two years ago.

The self-taught Leyesa used unlikely and disparate components such as calado embroidery, glass, wedding cord and safety pins to produce his pieces. He welcomes the scholarship program as an ideal opportunity for him to learn the finer points of design.

“These cathedrals are San Sebastian in Lipa, Immaculada Concepcion in Batangas City, and San Martin de Tours in Taal,” the Batangas native said of his inspirations. “Almost everything was done by hand by me and my team.”

The piece Leyesa donated for auction was a charm necklace of sorts inspired by San Sebastian’s colorful stained glass windows.

As her way of acknowledging Jaggy Glarino’s potential and choice of material,   Tan Gan added to the list of prizes by awarding Glarino an all-expense-paid trip to England and scholarship at CSM. A Lulu Tan Gan Award was created that night, and  the veteran designer also invited Glarino to join her team.

The Davao-born Glarino, 27, worked for a time in Dubai. For his three-piece collection consisting of knitted separates, he ditched “normal” fabrics in favor of knits, which he developed from a combination of cotton, saluyot, water hyacinth and piña fibers.

He first considered using delicate Mindanao silk yarn for a more luxurious feel, but the idea wasn’t feasible due to time constraints and lack of materials. He then went to the Philippine Textile Research Institute and learned that piña had been utilized and combined with cotton to create knitwear in the past.

With the institute’s help, Glarino came up with an updated version incorporating yarns sourced from saluyot and water hyacinth with cotton and piña.

“I’m used to dealing with normal fabrics,” he said. “The main challenge for me was dealing with a different material. I really wanted to challenge myself by doing something that’s totally unexpected of me.”

When he realized how tough the competition was, Glarino was happy he didn’t “do the usual.” Knits stand out in fashion competitions because, apart from being unusual, they’re labor-intensive materials, he said.

Glarino also knew he had to do something different to land a place or at least stand out among his equally talented and hungry colleagues. Tan Gan, hailed as the country’s “Queen of Knitwear,” saw his potential and took notice.