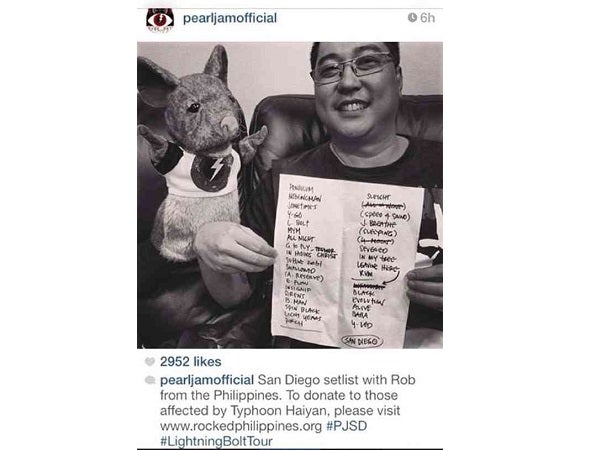 This is a story that began 21 years ago, when Rob Tuazon first discovered Pearl Jam. Since then, the band has become a huge part of his life—he even met Tasha Salvador, the woman who would become his wife, on a Pearl Jam online forum. The couple love the band so much that they named their son after Eddie Vedder.

Last week, Rob, a BPO executive, and Tasha finally got the chance to see the band they love perform live. Before going to the concert, Rob posted this on Pearl Jam’s forum:

“I’ve been wishing for this day to come after missing the chance to watch the band live back in 1995 at the Folk Arts Theatre.

“I first heard and saw the band at the 1992 VMAs when it performed ‘Jeremy.’ For the past 21 years, Pearl Jam has been the one constant throughout the highs and lows in my life. I was able to go through high school and survive college. Got my first job, got married and had my first born who we named after Ed. Lost my dad on New Year’s Day of 2008. And then finally got the means to be a Ten Club member a couple of years ago. This got me the chance to win a pair of tickets for shows that I will be attending.

“I will be sharing this experience with the love of my life, my wife who has been there for me for the past seven years. Of all the things we’ve ever done in our lives, this may be the best decision we’ve ever made yet. To see the band that made it possible for us to be together for the rest of our lives.

“As we enjoy ourselves with the next three shows, my heart, my mind and my spirit still goes out to my fellow Filipinos who have been devastated by Typhoon ‘Haiyan.’ Thank you for all the support you have shown to our country. Mabuhay tayong lahat! Long live Pearl Jam!”

At the show, they got the shock of their lives when Eddie called Rob onstage.

“Before we do the next song, can I ask if our new friend Rob is in the house? C’mon up here. Someone turned me on to this really nice story about Rob and he, I guess, has been listening to us for about 21-something years. Since you were like, two?” he said.

Eddie continued, “We played in (Manila in) ’95 and you missed that. Now you don’t have to feel bad about that anymore because you made it. And that’s why I asked you to come up here as a representative ’coz we had an incredible time there. Because of that, we’ve been thinking about y’all in the last two weeks, 10 days? Typhoon Haiyan … So we’ll see you in Los Angeles. We just wanted to tell you to tell them that we’re thinking about them and we’re gonna send you home with a check, too. It’s just a little something and since you’re here, we thought we can save on postage and have 100 percent of the money.”

The couple watched Pearl Jam the next night, in Los Angeles, and Eddie gave the Philippines a shout-out at that show, too.

Rob and Tasha, who are based in Angeles, Pampanga, have been Rock Ed Philippines volunteers for a long time—in fact, Rock Ed founding director Gang Badoy is their son’s godmother. Trusting Rob and Tasha, Pearl Jam has decided to course their donations through the org. Gang said, “I told Tasha they can send through the government or the Red Cross if they prefer an internationally recognized institution, it doesn’t have to be Rock Ed. Aabot din ’yun.”

But Rock Ed and these rock stars are a match made in rock and roll heaven. A couple of days after the show, while Gang and Rock Ed’s core group were in Tacloban delivering 70 kilos worth of medicines to the hardest hit areas and surviving on just crackers and a bottle of water each, they received an e-mail from Pearl Jam. Gang said, “It’s not just the money, the fact that the world is listening and cheering us on is exhilarating. I guess when in a crisis, the worst feeling is to feel that our pain is ignored, that while we’re crawling out, most are deadpan. So Pearl Jam taking notice was invigorating.”

Gang calls Rob and Tasha her heroes. “Speak on behalf of those who can’t speak just yet, the world sometimes listens. Pearl Jam did! I’m still so amazed. People are great. Rock and roll,” Gang said.