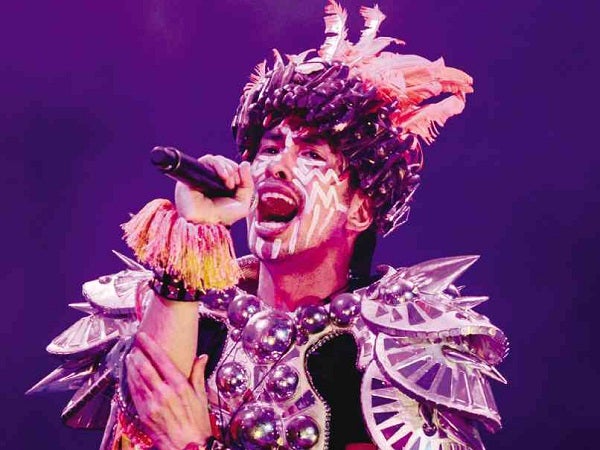 Nov. 15, 2013. Slouched comfortably on a sofa chair at Marina Mandarin Hotel, rock artist Rico Blanco quietly shares his thoughts on the devastation that “Yolanda” (international name: “Haiyan”) has left in its wake.

For someone who’s known to local media as a man of few words, the guy in front of us has so much to say. And we are more than willing to sit and listen.

With pop-rock quartet Rocksteddy, Rico has been tapped to represent the Philippines in Singapore’s annual Sundown Festival, which gathers some of the best and brightest artists from all over Asia in an effort to bridge cultural gaps in the region.

As fate would have it, the festival fell just a week after the supertyphoon wreaked havoc on the eastern provinces, and it’s quite understandable that Rico is feeling somewhat less than festive.

He was in Dubai for a gig when the calamity struck the Philippines. He recalled being glued to the news all day, anxiously waiting to hear how his mother’s relatives in Leyte were doing.

Upon his return to Manila, he was relieved to find out that everyone survived; since then, he’s been trying to find a way to get a rented truck full of food and supplies to them, to no avail.

Rico could have bowed out of the concert—in fact, he nearly did—and no one would fault him for doing so. But, as the saying goes, the show must go on, and for good reason. “We’re Filipinos. We value our word of honor, and we don’t want to let other people down,” he says.

It’s also for a good cause. Earlier, he had announced on Twitter and through the regional media conference that he would donate his entire fee from the festival to Yolanda survivors.

But it’s not enough, he stresses. “That’s why I’m working, so I will have more to give,” Rico explains. “I don’t know how long it will take for my relatives and everyone in Leyte to get back [on their feet]. They’ll be needing our help for a long time after this, and I hope we’re prepared for that.”

He also plans to record a new version of “Bangon,” the fundraiser track he’d written after Typhoons “Ondoy” and “Pepeng” hit the country in 2009. Initially, he  wanted to record a new song and put it up on iTunes to raise funds for relief aid. “Sadly, every time there’s a storm or some kind of devastating calamity, my song becomes relevant. It’s bittersweet, because you don’t want it to be relevant,” he says. “But time and again, people tweet me every time there’s a natural calamity, and it’s happening again now. Also, I felt that it was too premature to ask people to rise—bumangon—because they’re still on survival mode.”

But as he was checking his Facebook and Twitter, a lengthy message from a female fan caught his eye. “She said, ‘Kantahin mo ’yung ‘Bangon’ kasi nung kami ’yung tinamaan ng sakuna, araw-araw walang tigil naming pinapatugtog ’yung kanta sa barangay namin at sa buong bayan. At ’yun ’yung nakatulong sa’min na tumayo uli.’ So, I guess that was the sign I was waiting for.”

Right now, though, he can do only one thing for the survivors. “I think I’d like to call them ‘surviving,’ because I don’t think it’s over yet,” he begins. “To those back home in Leyte, Iloilo and the Visayas who are still struggling to survive and trying to make it out of this alive, they probably won’t get this message, but I’m praying for them. You can send material help and they will appreciate that, but because of the difficulties there, I think prayer is way more powerful in times like these.”

It’s OK to not be OK

Asked about what he thinks of the heated online arguments about Filipinos being resilient, he gives a very sensible answer. “I myself find it too early to celebrate Pinoy resilience too much, because a lot of people died. They can’t bounce back, or smile through adversity, because they’re dead. And don’t expect their families to smile, because it’s painful. They don’t have to be pressured to smile because they’re Filipinos. These are hard times. We’re a tough race, and sometimes we’re tough because we don’t have a choice. Maybe we can celebrate later on after this emergency state.

“I think, and this is just my opinion, that people need to know how and when to put our game face on. There’s a time to smile, but this is not the time for that. There’s a lot to be done. And it’s OK to not smile, to not be happy about what’s going on,” he says.

He adds, “It’s a beautiful thing to see everyone really aching to help; not just Filipinos, but all of humanity. That’s how we could celebrate now; I don’t mind. Sometimes all you need is some kind of rainbow you can see after a storm.”

Just because he’s personally affected by the Yolanda situation doesn’t mean his Sundown stint will turn out to be somber. It is a festival, after all. “We’ve already prepared a great show way before Yolanda struck, and we intend to keep it that way. I’m not even sure how I’ll be able to handle it emotionally, but I’m gonna make sure it’s a fun show. Every song will have new meaning to it.”

“I was excited to see Nidji on the lineup. I’m a fan of theirs; I have a couple of CDs back home,” Rico enthuses, going into fanboy mode. “When I was with Rivermaya, we did a promo tour in Indonesia, and they were the biggest band at the time. We did a back-to-back show then but I never really got to meet them, so it’s nice to see them here, still rocking out and doing music.”

As if on cue, a man in black passes by and stops short. “Rico? Rico Blanco, is it?” Eyes lighting up in recognition, Rico stands up and greets Nidji vocalist Giring Ganesha with an uncharacteristic hint of shyness. He’s a fan of the Indonesian rock band, and we find out minutes later that the feeling is mutual. The vocalist and his brother eagerly pose for photos with him and the three chat about a possible collaboration, but not before bursting into the chorus of the 2006 Rivermaya single “You’ll Be Safe Here.”

His music is what it is

We move on to dissecting the complexities of Rico’s ever-evolving music, beginning with the abstract lyricism of “214” and his Rivermaya repertoire. “Atenista rock,” he calls it. Then came 2009’s whimsical love ditty “Antukin,” which went on to become a mainstream hit.

Now, there’s the genre-bending extravaganza that is “Galactik Fiestamatik,” a trippy fusion of synth-pop sensibilities, guitar-less rock melodies and feral beats with a space-age theme. Given the diversity of the Sundown lineup, Rico’s setlist is the only one to straddle genres, if not creating a new one entirely. “Even before  ‘Galactik Fiestamatik,’ I’ve loved getting my music out there. Sabi ko nga, binyag, kasal, burol, pwede.” he says. “I don’t really look into genres. This ‘Galactik Fiestamatik’ set is not rock or pop; it is what it is.”

We wrap up our interview and he sinks back into silence. We wonder if all that talk about the situation back home might have killed his buzz. He shakes his head. “It’s OK. It’s not sad, it’s just… You have a purpose,” he says at last. “Music gives me shelter during hard times. There’s something beautiful about that; it doesn’t have to be happy or too celebratory, but there’s beauty.”