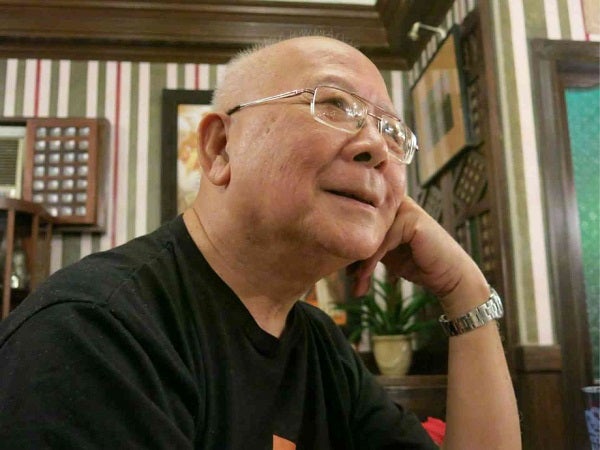 BIENVENIDO Lumbera: “It was Rolando Tinio and his genius that got me into theater.” ROLANDO TOLENTINO

Bienvenido Lumbera –in craft as in life, ‘forever 81’

A critic, professor, dramatist, poet (with a Palanca Award in the mid-1970s, shortly after his release from detention) and so forth, Bienvenido Lumbera, National Artist for Literature, is, like his fellow writer Gilda Cordero-Fernando, “forever 81.”

As a child, he survived the carpet-bombing of his native Lipa in Batangas at the end of World War II.

Lumbera was born in 1932 and was orphaned at an early age. He was a baby when his father Timoteo, a baseball player, fell from a tree while picking fruits, broke his neck and died. His mother Carmen, suffering from cancer, followed a few years later.

Young Bienvenido and an older sister were then brought up by their paternal grandmother, Eusebia Teru, who unfortunately also passed on later due to old age. For his new guardians, Bienvenido was asked to choose between maiden aunts with whom his sister had stayed, or his godparents Enrique and Amanda Lumbera, who were childless.

Aged 13 at the time, Lumbera chose his godparents because they could send him to school. He went on to study Literature at the University of Santo Tomas (Litt. B and MA degrees), eventually obtaining a PhD in Comparative Literature from Indiana University, United States.

When the dictator Ferdinand Marcos declared martial law in 1972, Lumbera went underground. He was arrested by the military in January 1974 and released in December that year. During the late 1970s, while I was interviewing him for Celebrity magazine, Lumbera told me he believed that a friend or colleague close to Marcos had recommended his release.

“Professor Lumbera is not violent,” he quoted this colleague as telling the authorities.

A man of letters used to working or writing alone, he was later drawn to the collaborative labyrinth that is the theater.

“As a beginning writer, I used English in fiction and shifted to poetry because I was such an inept typist,” he recalls. “Later, I began using Tagalog in my creative writing. My discontent with publishing was the absence of any feedback from readers. In the theater, however, feedback is immediate, so that if your work is effective, you can tell right away from the reaction of the audience.”

Lumbera’s foray into theater spawned some of his most successful works. For the Philippine Educational Theater Association, he created a musical based on Carlos Bulosan’s “America Is in the Heart.” Several highly acclaimed musical dramas followed, such as “Tales of the Manuvu,” “Rama Hari,” “Bayani,” “Noli Me Tangere: The Musical” and “Hibik at Himagsik nina Victoria Laktaw.”

In the playwright’s estimation, his most successful plays are his adaptations of “Noli Me Tangere,” “Hibik at Himagsik nina Viktoria Laktaw” and “Rama Hari.”

“The ‘Noli’ was able to project the vital themes of the Rizal novel and succeeded, it seems to me, in allowing the substance of the book to be accommodated in the songs. ‘Hibik,’ meanwhile, is a tribute to revolutionary women in a setting that celebrated my hometown of Lipa and its role in the Revolution of 1896.”

He adds: “‘Rama Hari’ was a challenge to adapt for the stage, being an epic and a foreign work that must be tamed for the Philippine stage. Much of the credit for the success of the play comes from the excellent direction and choreography of Alice Reyes.”

Federico Garcia Lorca of Spain and Bertolt Brecht of Germany are the playwrights who have had the most impact on Lumbera’s work in the theater.

“‘Bodas de Sangre’ and ‘Yerma’ (by Lorca) are imaginatively conceived and emotionally gripping,” he says. “I like Brecht for the discourse that his material provokes, allowing his plot to engage the audience in a discussion of issues that concern them. ‘The Good Woman of Satzuan’ is a fine example of theater that draws an audience to think out problems in society, but avoids boring them because he has an ironic sense of humor.”

Among the directors he admires are Chris Millado and Nonon Padilla. “Millado excels as both playwright and director, while Nonon Padilla is amazingly inventive. Also, the young director Tuxqs Rutaquio overwhelmed me with his ingenious work in ‘Ibalong.’”

Lumbera also pays tribute to a friend and fellow National Artist, the late Rolando Tinio: “It was Rolando Tinio and his genius that got me into theater. His great insight into the art of theater and playwriting was that they were a continuing effort to approximate what an artist considered as passing and transitory in the world.”