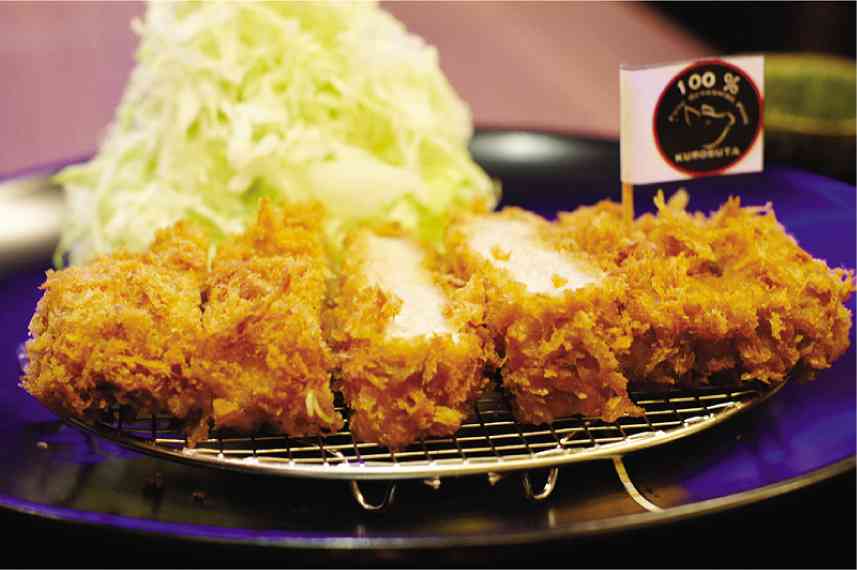 THE IDEAL tonkatsu: crunchy on the outside and tender on the inside

A must-stop in your search for the perfect ‘tonkatsu’

A lot of foreigners who visit here are befuddled by our penchant for pork (the meat, not the government funds).

One such visitor recounted how he, after being served a pork dish for the nth time, requested for vegetables, only to discover that the vegetable stir-fry dish he was served also had bits of pork.

The tonkatsu craze that made its way from Japan to Manila  was welcomed with open arms. After all, the pork cutlet dish had what Filipinos loved: oil, crunch and pork.

Barely a year since the fad hit Manila, tonkatsu restaurants have cropped up, including established franchises from Japan. The demand for pork cutlet was so intense that The Bistro Group (of Friday’s and Italianni’s fame) saw fit to convert its Japanese-Western fusion restaurant Ma Maison into one exclusively with tonkatsu.

Ma Maison had a fantastic tonkatsu set, one of our favorites when we did a tonkatsu taste test around Metro Manila a year ago.

Terazawa was here recently to show us how his obsession with cooking the perfect tonkatsu led him to a special aging technique that resulted in tender, melt-in-your-mouth tonkatsu.

Terazawa wanted a tonkatsu restaurant over 30 years ago. “My first tonkatsu 30 years ago didn’t have the aging technique; the sauce was instant, cabbage slicing had no style yet—it was really a step-by-step process to get to our tonkatsu process now,” he says.

However, despite the praises Terazawa has received for his tonkatsu, he thinks it’s still far from perfect. His drive to perfect the tonkatsu led him to  try the competition around the metro.

“They’re all good, everything’s good,” he declares with a wink.

To a seasoned chef, cooking the breaded pork cutlet seems like child’s play. Yet it is the simplest dishes that are hardest to execute flawlessly.

Tonkatsu must be crunchy on the outside and moist and tender on the inside; though it is deep-fried, the texture has to remain light and not spoiled by oil.

Tonkatsu by Terazawa has a special technique—the pork  is wrapped in white cloth and aged for three days in the freezer. This helps seal in the juices and flavors of the meat, unlike frozen meat that is left uncovered, where the temperature tends to leach the meat’s natural flavors.

Seasoning is done after the pork is aged.

Another chief difference evident in Terazawa’s tonkatsu is the way the dipping sauce is prepared. Unlike in other restaurants where you are handed sesame seeds in a mortar and pestle for grinding and mixing with the tonkatsu sauce, here, the sesame seeds are in a clear bottle with its own grinding mechanism.

“Grinding sesame seeds was a way to keep the impatient children busy!” jokes Terazawa. He prefers the ground sesame seeds sprinkled directly on the pork, with a pinch of Japanese salt, before dipping into the tonkatsu sauce.

Indeed, the sesame flavor is more striking when poured over the pork, compared to mixing it in with the sauce where it tends to disappear, especially if you mess up the seed-to-sauce ratio. You won’t need to ask for extra sesame seeds; you’ll have a bottle to yourself.

Recognizing its Nagoya origins, it has on the menu a special Nagoya Meshi Katsu set, where the pork is mixed with miso (soybean paste), and a Negi Katsu, where the cutlets are served with a special negioroshi sauce, a mixture of grated radish, onion leeks and ponzu sauce.

Another must-have at Tonkatsu by Terazawa is the kakifurai or deep-fried oysters. The oysters are imported  from Japan, and each oyster is huge; the oyster’s salty ocean flavor is evident in each crunchy bite.

You can pair this with the jumbo ebi furai, gigantic fried prawns coated in fresh bread crumbs and deep-fried. Both seafood dishes are served with tartar sauce.

The cozy, homey interiors of the restaurant will make you feel like a guest at a Japanese country home with Western décor. The booths are comfortable that you’ll want to linger even after the last bread crumb is consumed.

Make sure to  order the Frozen Green Tea, its  version of brazo de mercedes with a hint of green tea, as a sweet ending to your deep-fried love affair.

Tonkatsu by Terazawa is at Greenbelt 2. Operating hours are from 11 a.m. to 12 mn (Sunday-Thursday) and 11 a.m. to 1 a.m. (Friday and Saturday). Check out the restaurant’s Facebook page at http://www.facebook.com/TonkatsubyTerazawa and follow them on Twitter and Instagram @tonkatsuph.