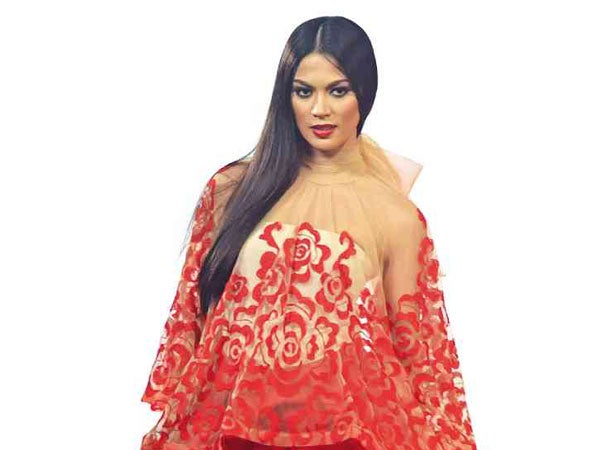 It’s not every day that you witness fashion’s pecking order shunned or egos set aside. But that’s exactly what emerged last Friday, when over 100 Filipino fashion designers banded together for a fundraiser show in aid of the Supertyphoon “Yolanda”-devastated Visayas.

It was the biggest gathering yet of a show of its kind. Directors-organizers Jackie Aquino and Robby Carmona, fashion designers Randy Ortiz, JC Buendia and Edgar San Diego, and Inquirer Lifestyle editor Thelma San Juan brought together in one venue the top names in local fashion for “Filipino Para Sa Filipino,” which raised P809,750 for Tabang Visayas, an umbrella of various civil society organizations focused on the rehabilitation of the typhoon-hit areas. The amount includes a P100,000 donation from SM.

Some of the designers who usually withdraw from the limelight not only sent their clothes for the show, but also made an appearance at the venue, SM Aura’s Samsung Hall in Bonifacio Global City.

“It’s for camaraderie, and we’re just here to help,” the notoriously reclusive Auggie Cordero said backstage. “We also get to see one another.”

Barge Ramos, who recently returned from another fundraiser in San Francisco, said designers are “mentally prepared” to stage “fashion-for-a-cause” shows whenever calamity strikes.

“But so far, this is the biggest,” he noted.

Ramos, who’s no longer affiliated with any industry organization (he belonged to the first batch of Fashion and Design Council of the Philippines), said hierarchy and alliances are

irrelevant for such a gathering. “Everybody just wants to do his share.”

In San Francisco where he was the featured designer, Ramos said the organizers of the Philippine International Aid, which helps disadvantaged Filipino kids, earmarked $20,000 for the typhoon relief from the $88,000 they raised.

For “Filipino,” the fashion groups were each assigned a color theme, and the clothes were sent out alphabetically. Tickets were sold at P1,000 each.

“I tried to invite as many as I could,” said Ronaldo Arnaldo, a former Fashion Designers Association of the Philippines member, who’s now with FDCP.

“I was just a little worried,” said one of the designers. “I didn’t know that the seating is like the bleachers. Mapapagalitan ako ng mga matrona.”

He was smiling but you could tell he wasn’t joking.

But nobody seemed to mind, even as no cocktails—or even water—were served.

What happened in the Visayas is personal for Eric de los Santos, whose family hails from Iloilo. His mother’s hometown of Balasan was “totally wiped out,” he said.

“I’m more focused on the rehab of Iloilo, especially Batad, Concepcion and Roxas,” De los Santos said. “My friends and I have been helping gather blankets and finding ways to get clean drinking water for the victims.”

Joey Samson recalled taking part in another fundraiser of this sort in early 2000 “but it wasn’t well-attended… It’s nice that we can get together to do something.”

Surveying the scene backstage, Samson differed, however, by noting that “you can still see a little bit of ego.” He added, though, that “that’s only to show that talent comes in all shapes and sizes. They can be really spare and minimal, or really grand.”

Some had done their independent share in the relief efforts outside of last Friday’s event—sending relief goods or donating cash, but others admitted that participating in the show was their share.

“It’s not about ego or anything but just about helping,” said Jojie Lloren. “It’s the least we can do…”

Rhett Eala himself couldn’t volunteer at the evacuation centers, but helped pack relief goods in his village. He is still recovering from a major surgery and is unable to lift heavy objects.

“When Typhoon ‘Milenyo’ happened and we lost electricity for three days, it was terrible,” recalled Efren Ocampo. “I was crying while watching CNN. I remembered complaining about the power outage during  ‘Milenyo’ and I felt so bad. These people, they’ve lost everything!”

He sent goods through a friend who went to Samar and Leyte.

Cordero admitted his help was extended to his staff, four of whom were indirectly affected by the calamity.

“We’re part of the industry and we’d like to show our support. It’s one of those good reasons to come together,” said Jojo Liamzon, advertising and promotions manager of the Bench group. Like the other retailers, Bench had its own relief activities.

Liamzon’s colleague, Marco Protacio, added: “It’s an industry where everybody knows one another, so when the time came when everyone was asked to

help, it was easy. It was very natural. Walang kontrabida.”

Several accessories designers also donated their wares for auction outside the venue. Top models and beauty queens walked the runway, while all participants, including hairstylists and makeup artists, waived their usual fees.

It was as director Aquino said backstage before the show: “For a change, let’s do it for our country.”