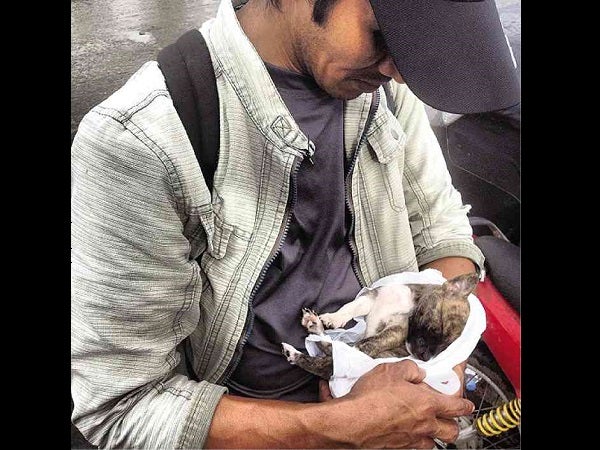 JAKE Tumaob and Palos the puppy

Last week, a young man named Jake went up to me at the Tacloban airport. (I found out that 38 members of his family died from the wrath of Supertyphoon “Yolanda.”)

While we were both waiting for a C-130 flight out of Tacloban, he asked me if I could take his puppy. He explained that he had found the puppy crying. By some miracle, the little dog survived the storm. It was perched on one of the high branches of a coconut tree near what was once Jake’s home. He climbed up, took it, and found ways to nurse the puppy for a week.

I explained to Jake that I couldn’t take the dog with me. Instead I asked for his number and memorized it above the din of the planes taking off and landing some feet away from us.

He had tried to sneak the puppy into the C-130 but ended up giving the little canine to a soldier “who looked kind.” All he asked of the soldier was to keep the puppy’s name “Palos” (after a type of hat Jake once had that was the same brown color as the puppy, he explained).

In the next four days I kept sending Jake text messages, asking if he got to fly and if his puppy was okay.

I got a reply on the fifth day. Someone named Andy (from Dasmariñas Village, Jake told me, and most probably part of “Oplan: Hatid”) and his two sons drove a big group of storm evacuees all the way to Baguio because someone had relatives there. Jake had none left so he joined this exodus to the highlands.

I called up friends from Rock Ed Baguio if they could meet up with Jake and possibly offer him a job. They immediately responded; first they gave him a cell phone. (At the airport, he was just clutching a SIM card; he had to wait to insert it into one of his group mate’s phones in rotation, which was why it took him a few days to reply.)

The Rock Ed Baguio kids also gave him leftover clothes that were supposed to be dropped off at Villamor. He took these to the group’s home he was staying in with other refugees from Leyte so they could have extra clothes, too. Eventually, the home base of Rock Ed in Baguio, Canto, Ketchup Food Community, hired him as extra help for the month of December.

The other night, while in Baguio for a debriefing session with the Rock Ed relief team that went to Tacloban, we caught up with Jake after the restaurant closed so we could catch up a bit. Among other things, we talked about how different the weather is in Baguio compared to Leyte.

This is just one story, of just one man. I am certain there are other stories out there. I hope we get lucky enough to hear them all. Hope is contagious. Let’s keep the good stories in the light.

Livelihood is the goal. After all, with or without Yolanda, this is something we should all see done.

His name is Jake Tumaob of Palo, Leyte, now a working resident of Baguio. Any other day, I’d have other stories to tell but today, this is all I have.